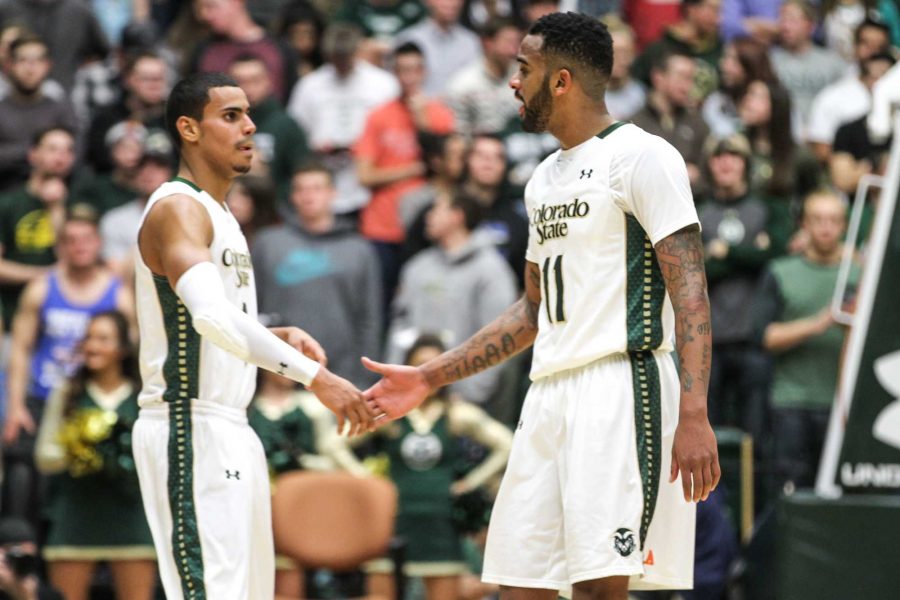 AIR FORCE ACADEMY — All the Colorado State offense needed was a spark. Saturday afternoon, the Rams got a five-alarm wildfire.

Led by senior forward J.J. Avila’s 28 points and 14 rebounds, as well as 17 points from Stanton Kidd, CSU broke out of a two-game shooting slump and survived a late Air Force rally to knock off the Falcons 92-87 in front of 3,019 fans at Clune Arena in Colorado Springs.

After a cold start that saw the Rams shoot just 3 of 10 in the early going, CSU, led by Avila, turned it on midway through the first half and closed the final 10-plus minutes on an extended 29-11 run.

While the Falcons continually missed open looks, CSU found its groove after shooting just 32 percent and 34 percent in losses at New Mexico and at home to Wyoming.

The Rams had no such struggle in the first half, jumping out to a 48-28 lead at the break after shooting 60 percent, while knocking down six 3-pointers and outrebounding the Falcons 23-13.

“We just did what we are normally used to doing, which is getting the ball around into guys’ hands, getting cuts to the basket and guys will find you if you’re knocking down shots,” Kidd said. “Coach [Eustachy] kind of gives you the freedom to keep shooting and that’s the good thing about this offense.”

However, the game turned ugly early in the second half when a loose ball foul on J.J. Avila ended up in Avila getting tangled up with Air Force guard Zach Kocur. After Avila landed on Kocur, knocking his head to the ground, Air Force guard Matt Mooney climbed on top of Avila and punched him in the back. CSU center Tiel Daniels then pulled Mooney off of the pile before the teams were finally separated.

Following a 10 minute discussion between the officials, Mooney was ejected from the game for throwing a punch, Avila picked up both a personal foul and technical foul while Daniels and Air Force forward Justin Hammonds picked up technicals for their roles in the scuffle. Each team made three of its four free throws, which put Rams ahead 55-39 with 17:34 to play.

Video by Travis Green and Keith Albertson, CTV11 Sports
“I went over the guy’s back, tried to get the ball and my hand was caught and then he rolled on my legs and some guy punched me in the back, and you saw what happened,” Avila said of the skirmish.

After play resumed though, it was a completely different story than the first frame. Little by little, the Falcons chipped away at CSU’s lead. While a re-energized Clune Arena came alive after the near-brawl, the Falcons finally cut the deficit to single digits on a 3-pointer by Kocur with 11:21 to play. The Rams would respond though, stretching their lead back to as many as 14 on a pair of free throws from Avila with 7:30 to play.

But the Falcons wouldn’t go lightly, cutting the CSU lead to three on three separate occasions during the final two and a half minutes.

It was CSU who would close out the win though, hitting 12 of 16 from the charity stripe over the final 2:05 to escape with a 92-87 victory and even their Mountain West record to 2-2 and move to 15-2 overall.

“It was a must-win and I thought we showed character under the circumstances,” Colorado State head coach Larry Eustachy said. “We knew they were going to make a run back at us, Daniel [Bejarano] is at home (with strep throat), but coming down here with eight guys, this was a great gut check for our guys and a great character check. This is one of the best games I’ve been involved with in a long time.”

For the afternoon, the Rams shot 52 percent, while hitting 8 of their 26 3-point attempts and also added a 24-36 performance from the free throw line. Guards Gian Clavell and Joe De Ciman pitched in 13 and 12 points, respectively.

Max Yon led the Falcons 25 points on 7-for-18 shooting with Marek Olesinski adding 20 and Justin Hammonds totaling 13 points and 11 rebounds.