Record-breaking season for CSU volleyball comes to a close 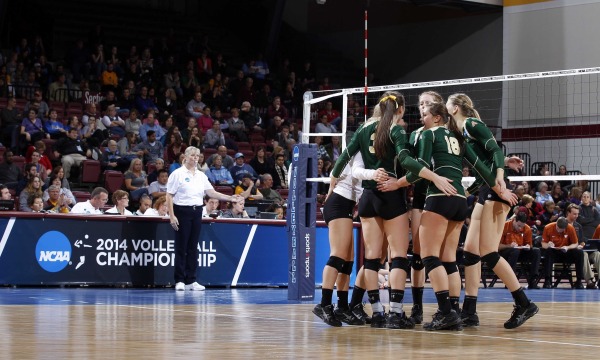 At one point or another, all good things have to come to an end.

One goal CSU had headed into the match was to keep the game close and win in the end. While the Rams kept each set close, the Longhorns were able to go on multiple runs, distancing themselves late in each set, ultimately a huge reason why they came out the victors.

“They were better defensively than I thought they would be,” CSU head coach Tom Hilbert said. “They were very solid. They were prepared, too. You could tell they knew what they were doing. They took us very seriously, which I took as a compliment.”

Texas set the bar high with a 6-1 lead in set one. The Longhorns height, speed and overall athleticism shut down the Rams defense and middle attack. With eight team blocks for the Longhorns and 16 kills from powerhouse Haley Eckerman, CSU had no answer.

The Longhorns had four players with seven or more kills on the night, with Eckerman leading them in double digits hitting .364.

“They really shut down our middle attack almost completely, and that’s usually something that’s really good for us,” Hilbert said.

Senior Kelsey Snider, who averaged at least 8 kills per match, was limited to two kills on 12 swings. While Texas contained the middle, outside hitter Marlee Reynolds racked up 11 kills on 41 swings and right side hitter Adrianna Culbert totaled eight kills on 20 swings.

CSU hit .175 after three sets with 34 kills and 14 attack errors, six of which were unforced.

“I told them that after the match this does not define who you are as a player by how you feel right now,” Hilbert said. “Sixty-three teams end up losing, and they all feel like you do right now. Look at your body of work. There are two teams still in the tournament from non-Power Five conferences, and you’re one of them.”

Collegian Sports Reporter Haleigh Hamblin can be reached at collegian@sports.com and on Twitter @haleighhamblin.