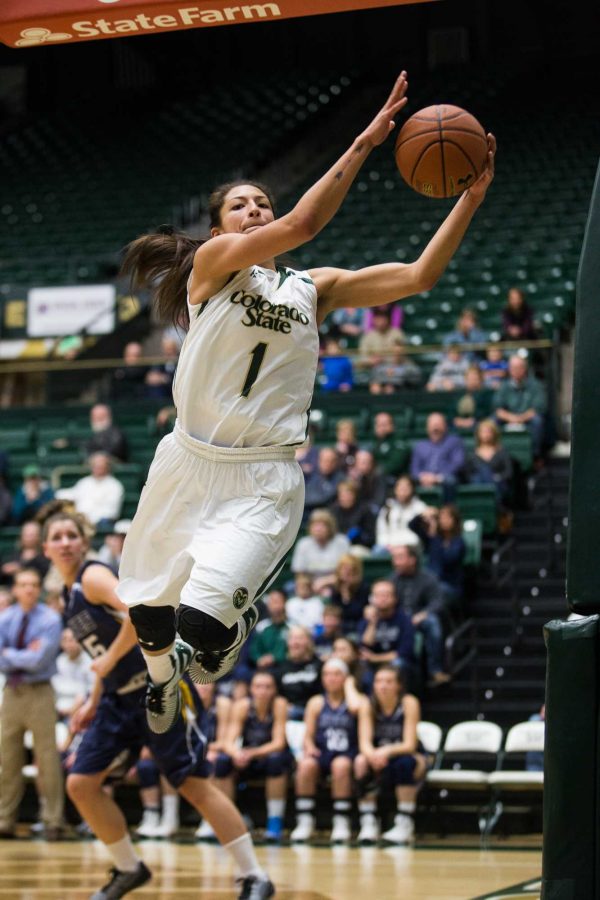 Out of the gate, CSU (5-3) dealt with several minutes of unfriendly rims in Moby Arena before finding its shooting groove. The Hardrockers (3-6) kept it close for the opening 10 minutes of the first, trailing only 11-7 at the midway point of the half.

But a Gritt Ryder three-pointer ignited CSU offensively, and the Rams took off on a 10-3 run, going up 21-10 in just two and a half minutes. South Dakota Mines was unable to make enough jump shots against CSU’s 2-3 zone, which the Rams showed for the first time this season.

CSU head coach Ryun Williams said he thought the zone would help save some energy for his players as the Rams play two more games this week for a total of three in five days.

“We haven’t played three possessions of zone all year,” Williams admitted. “We didn’t want to get too wild and crazy defensively and drain our kids. I thought we were pretty disruptive in that. It was neat to see our kids execute that.”

Toward the end of the first, 6-foot-4 center Alana Arias checked into the game, making an appearance on the court for the second time this season after getting a couple minute of run at the end of the game in the BYU loss Saturday.

The junior scored her first points as a Ram with a post move with under a minute to go in the half. Then, on the last possession of the half, Arias grabbed an offensive rebound off a Keyora Wharry miss and drew the foul to get to the line for two free throws, stretching CSU’s lead to 16 heading into the break with a score of 35-19. Arias finished with eight points.

“You can see that she has some skill on the block,” Williams said of Arias. “I think as the game went on, you saw Alana become more and more comfortable. We’re going to need her. We need size. We had that in Sam (Martin) last year who could get you some baskets down there and Alana can be that.”

The second half began with a couple Hardrockers baskets to keep it close, including a jumper to start the half from Fort Collins native Payton Humpal. The Hardrockers looked ready to make a run after a deep three made by Megan Rohrer cut the CSU lead to 13 early in the second half, but Gritt Ryder answered with her third three-pointer of the game, keeping CSU in full control with a 16-point lead.

Next, Ryder found Ellen Nystrom for a layup with a pass off of a pick and roll. That was followed by another Arias layup, and suddenly, the Rams had a commanding 20-point lead over the Hardrockers with 12 minutes to play.

From there, CSU extended its lead with a slew of Hanne Mestdagh three-pointers and Jamie Patrick jumpers, and South Dakota Mines found no offense to keep up.

Ryder hit one more three to push her point total up to a game-high 20 for the night to go along with her nine assists. Patrick and Keyora Wharry also both finished in double digits with 10 a piece.

“I was anxious to see how we were going to respond from the BYU (loss on Saturday),” Williams said. “We got done what we needed to get done.”

“It was good for everyone to get their confidence back,” Ryder said. “It was a tough loss at BYU, so it was fun to come back here and play well all of us.”