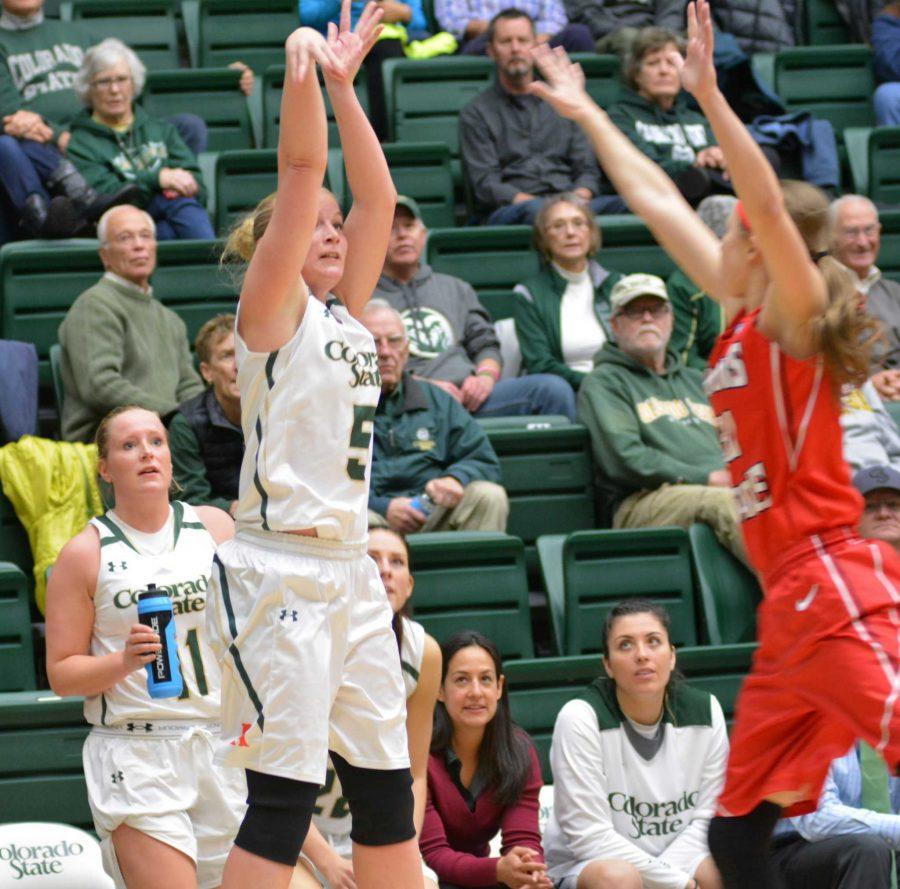 Only one woman looked totally comfortable on an NBA court in Saturday’s women’s basketball game between CSU and the BYU Cougars in Salt Lake City at Energy Solutions Arena, home of the Utah Jazz: BYU guard Lexi Eaton.

The junior led BYU (5-3) to a 69-58 victory over Colorado State (4-3) Saturday afternoon with a monster game of 30 points and a career-high 13 rebounds for her first double-double of the season. No other player had more than 13 points.

“I like playing in this arena, it’s a great atmosphere,” Eaton said after the game.

It certainly showed as she sparked the Cougars’ hot hands in the first half with a quick three to light the scoreboard out of the gate. BYU leaped out to a quick 8-5 lead behind an additional three-pointer from center Morgan Bailey.

Two free throws from Gritt Ryder followed by Keyora Wharry stealing a Cougars’ dribble for an easy fast break layup gave the Rams a 9-8 lead three minutes into the contest, but it would be their last time ahead as Bailey’s rare three-pointer going down must have signaled the Cougars their shots were falling in Energy Solutions Arena.

Eaton responded with two consecutive three pointers before Kylie Maeda drained another from downtown for BYU. Two free throws followed by a layup for Eaton concluded a 13-2 BYU run leaving CSU down 21-11 at the midway point of the first half.

The Rams struggled to get anything to go against a BYU defense that was tough on the interior. The consistent outside shooting carrying the Rams in their last road win over Drake Wednesday night seemed to disappear Saturday as the Rams concluded their first road trip of the season in Salt Lake City.

The Rams were provided a fighting chance by BYU’s cooling off at the end of the half as well, though, as the Cougars went two for their last ten attempts in the first, taking an eight point lead into the locker room with a score of 33-25.

Ryder said CSU may need to be less reliant on the three ball early and recognize more quickly when it’s not falling to get some closer looks in the future.

“We need to know when to go where,” Ryder stated.

CSU’s Emilie Hesseldal began the second half by draining a jumper from the corner, cutting BYU’s lead to six, but Eaton retaliated with a three pointer of her own, ensuring six would be the closest the Rams got through the rest of the game.

When play resumed after an injury, it was all Lexi Eaton, who did everything in the second half, scoring from the perimeter, the paint and the free throw line as the junior drew several fouls she was able to finish through to convert and-ones from the charity stripe.

CSU fought to remain within striking distance, finally creating decent inside looks with Nystrom post ups and a few Ryder layups, but Eaton and the Cougars were rolling too hard as they led by as much as 18 before the Rams started chipping away at the margin.

Jamie Patrick kept it exciting at the end, though, draining three consecutive three pointers, cutting the Cougars’ lead to 11 with a couple minutes left before the game was decided.

Ryder, who has played every minute of CSU’s last three games, led the Rams with 13 points, keeping her complete game streak alive even after picking up a fourth foul with five minutes to play. Nystrom was the only other Ram in double figures with 12 points.

CSU takes on South Dakota Mines Tuesday in its next contest back at home in Moby Arena tipping at 7 p.m. The contest is the first of a four game home stand for CSU before Mountain West Conference play begins for the Rams on New Year’s Eve at Boise State.