Colorado State volleyball looking to upset No. 2 Texas in Sweet 16 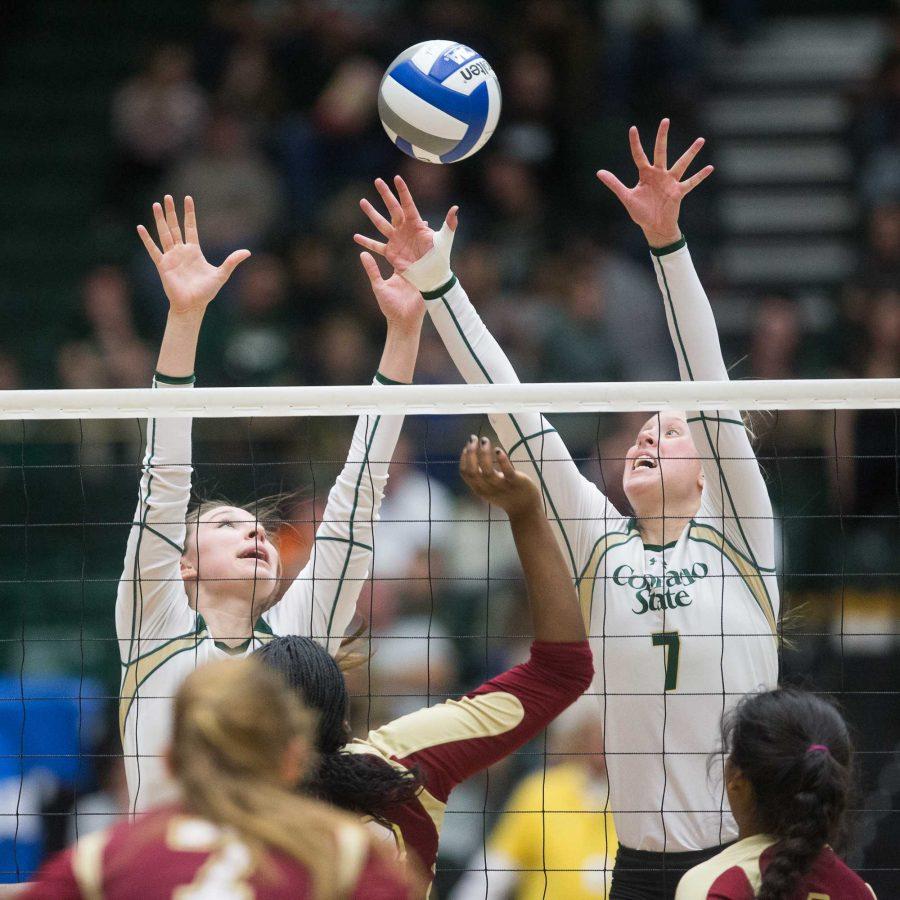 Colorado State players Alexandra Poletto, left, and Kelsey Snider go for a block during the Rams' win over Denver Friday.

As No. 9 Colorado State takes on No. 2 Texas in the Sweet 16 of the NCAA Volleyball Tournament, Collegian volleyball reporter Haleigh Hamblin breaks down the matchup:

Series against the Longhorns:

When you look at the all-time 1-7 record against Texas and even closer at an 0-2 record in the NCAA Tournament, it is clearly shown that CSU has not had good luck competing against the Longhorns. With five straight losses to the Longhorns, dating back 16 years to their last face-off in 1998, one thing to focus on is that the Rams volleyball program has improved a lot since then and are in the midst of one of the best seasons in program history.

There is no time like the present than to upset one of the top teams in the country, to advance to its first ever regional final.

Despite a 0-3 loss against No.4 Wisconsin back in September, the Badgers gave the Rams their best look at what to expect from the Longhorns Friday. Though CSU is not favored headed into the match, the Rams have proved all season to be a comeback team and have been able to rally at several pivotal points late into the match.

Texas is an all-around hard hitting, fast paced, well coached and strong defensive team. They are the whole package.

The Longhorns are deadly on the attack with Khat Bell averaging 2.86 kills and 0.95 blocks per set on the outside along with Haley Eckerman who also ranks No. 11 nationally with 0.46 service aces per set.

Similar to the offense CU ran against CSU last week, Texas has a two-setter offense led by Chloe Collins and Nicole Dalton averaging more than 5.00 assists per set. The Longhorns also rank No. 6 nationally in blocks per set, with 3.00 to their name, and No. 11 nationally in opponent hitting percentage (.148).

While Texas ranks in the top 15 for both hitting and opponent hitting, CSU does as well. The Longhorns look great on paper in hitting, blocking and defense, the Rams will need to disrupt the rotation early on and block balls. If they dont, the Rams do not stand a chance.

“I want to get past this, very badly, but you do it one point at a time, one set at a time.,” CSU head coach Tom Hilbert said. “It’s a matter of going on a little run at the right point in time. You know, Texas is a difficult opponent. I think last time we were in this regional, even with the University of Minnesota, it is daunting athletically, than what it looks like now. But, we play the game well. So it’s a matter of we have to stay composed, and it’s like Marlee [Reynolds] said, we cannot play tentative, we cannot play safe. This is a time to put all of your cards on the table and go for it and see where that takes you.”

At this point in the 2014, CSU has nothing to lose. The Rams have already proved to be the best collegiate volleyball team in the MW and the state of Colorado with victories over Denver and No.19 Colorado during the first and second rounds of the NCAA Tournament.

Now competing away from Moby Arena for the first time in three weeks, CSU will face its toughest road test of the year to date.

“No one really expects you to win, so you really have nothing to lose. Why not go out and give it your all,” junior opposite hitter Adrianna Culbert said during Thursday’s press conference. “We need to show everyone and ourselves that we can compete. Do what you can and as much as you can to really get that edge. The underdog edge.”