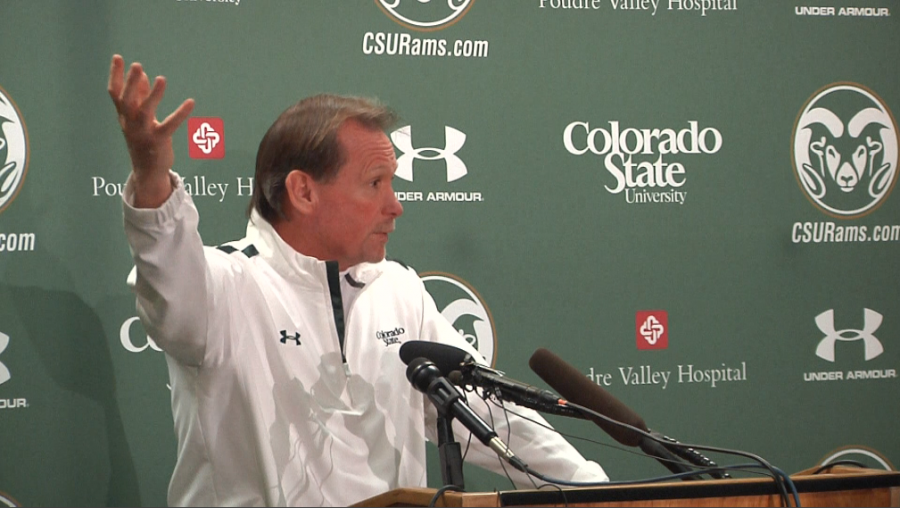 Out with the old, in with the new.

Despite the official news that now-former Colorado State head coach Jim McElwain had accepted the head coaching job at the University of Florida being just a few hours old, CSU has already turned its attention toward the future.

In a press conference early Thursday afternoon, interim director of athletics John Morris addressed the media regarding McElwain’s departure and where the University goes from this point.

Morris said he has been contacted by north of 40 candidates, all of whom he believes have very impressive resumes.

Despite being one of McElwain’s top assistants and a possible candidate to be his offensive coordinator at Florida, Baldwin said he would very interested in becoming the next head coach at Colorado State.

“Definitely,” Baldwin said when asked if he would like to be considered for the position. “I came here under Coach Mac for a purpose and I’m not up here to tell everybody why, but yes, I would like to be a candidate. Hopefully I get the chance to be the players’ coach for the next period of time.”

For now, Baldwin will lead CSU for at least the next three weeks to a month as the Rams prepare for a berth in either the Las Vegas Bowl Dec. 20 or possibly the Cactus Bowl in Tempe, Arizona on Jan. 2.

“We’re obviously happy for Coach Mac,” junior right tackle Sam Carlson said. “But right now we’re just waiting to see who we’re going to play and where we are going to play. Hopefully Vegas, that would be fun.”

Should the Rams be selected for the Las Vegas Bowl, which is highly likely if No. 22 Boise State beats Fresno State Saturday in the Mountain West Championship game, they’ll like either face Washington, Stanford or Utah from the Pac-12. Knowing that a bowl game is ahead has eased the minds of CSU players, helping to take their mind off of what has been a hectic last 72 hours.

“We’ve got something to play for and a lot to be happy for,” Carlson said. “We’re going in the right direction and we’re going to be okay.”

Collegian Sports Editor Keegan Pope can be reached at kpope@collegian,com and on Twitter @ByKeeganPope.