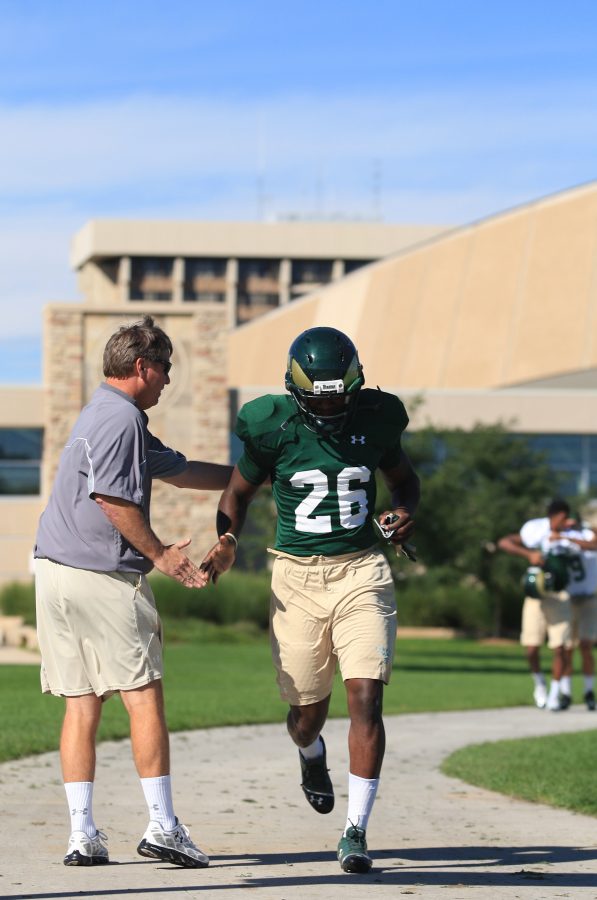 Colorado State safety Kevin Pierre-Louis (26) and his teammates hope to quiet their critics this season.

Three years ago, Colorado State fans were delighted when they heard that Alabama offensive coordinator Jim McElwain would be the Rams head coach. He had great experience at every level of the sport and seemed to be the perfect coach to bring the Rams back to the success they enjoyed with Sonny Lubick.

What fans in Fort Collins didn’t realize was that McElwain would do such a good job that his success here would be very short-lived. After going 22-16 in three seasons, including a 10-2 record this season, and taking CSU to two-consecutive bowl games, the Florida Gators came calling and gave coach McElwain an offer he couldn’t refuse.

McElwain accepted the job to be the head coach at Florida before finishing the 2014 season with the Rams, meaning that the CSU squad and their interim-coach Dave Baldwin will head to the Royal Purple Las Vegas bowl to play Utah without their award-winning head coach. But the Rams won’t be without their players.

Even without McElwain, CSU still boasts one of the nation’s best offenses behind the quarterback-receiver combination in Garrett Grayson and Rashard Higgins and the running of Dee Hart in the backfield.

Also, if history is on CSU’s side, then the loss of coach McElwain shouldn’t have any effect on the outcome of the game. In last year’s Gildan New Mexico Bowl, it wasn’t McElwain’s coaching that forced two late Washington State fumbles to steal the victory — it was the players.

But it’s not to say that the loss of McElwain will have no impact on the game. The former head coach had a knack for not only getting his team prepared for big games, but keeping their emotions in check.

McElwain wouldn’t let his team listen to the outside noise, and coach Baldwin is picking up right where Mac left off.

“I think the kids have been focused,” Baldwin said. “The outside perimeter stuff; I don’t think it’s affecting them at all.”

With McElwain gone, the Rams bowl game actually becomes more of an importance for the football program. A great performance against Utah could attract potential big-name coaches like Lane Kiffin or Bo Pelini to come to CSU, while a big loss against the Utes could do just the opposite. But surely Baldwin will want to win the game so that he has a substantial chance of becoming the next official head coach.

What will be interesting to see is how Baldwin game plans for the Utes now that McElwain is gone. Baldwin may take a more conservative approach and try to stymie the Utah pass-rush with Dee Hart and the running game, but he may take a more risky approach and utilize the Grayson-Higgins connection. Either way, Baldwin has the respect and trust of his players to go lead them to a victory.

“(Baldwin’s) been here through ‘the grind’ as we always talk about,” senior linebacker Aaron Davis said. “We trust him to the fullest and we trust all of our position coaches. I think we’ll be alright for the game.”