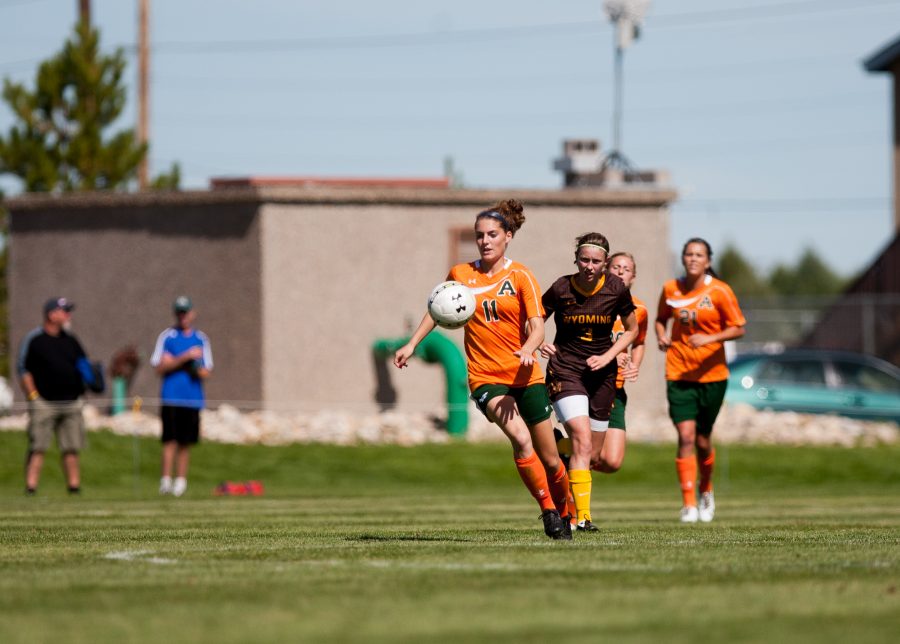 The Rams lose to Wyoming 3-0 on Sunday afternoon. Sunday's game was an orange out event and many fans showed their support for the Rams.

Wyoming freshman forward Kaitlyn Lomsnes provided the Cowgirls with an early 1-0 lead in the eighth minute when she shot a quick one off a rebound past CSU goalkeeper Jesse McGinley. McGinley got a hand on it, but was unable to stop it from reaching the back of the net.
The Rams nearly evened the score in the 11th minute with a Catherine Ruder strike from 30 yards out that was only saved by diving Wyoming goalkeeper Alex Boehm.
Later in the first half, though, the Cowgirls took advantage of CSU’s missed opportunity and pushed the score to 3-0 with two more goals. The first came from Alisha Bass on another rebounded shot she quickly put back into the net. The Cowgirls’ third goal came courtesy of Mandy Meyer just before the first half ended in the 41st minute.
Wyoming kept its foot on the gas pedal to open the second half as Candace Sciberras scored a fourth Cowgirls goal in the 48th minute, pushing the score to 4-0.
Colorado State sophomore Kasey Dietrich finally put the Rams on the board in the 78th minute. A Catherine Ruder free kick bounced in the box to Megan Speed, who then assisted on Dietrich’s first goal of the season.
The Rams finished their second season as a program with a record of 4-15-0, going 2-9-0 in the Mountain West. CSU doubled its wins from last year’s inaugural campaign.
With the win, Wyoming captured second place in the Mountain West with a mark of 8-3-0 in the conference and 10-8-1 overall.
Collegian Sports Reporter Sam Lounsberry can be reached at sports@collegian.com and on Twitter @samlounz.
Delete Image
Align Left
Align Center
Align Right
Align Left
Align Center
Delete Heading