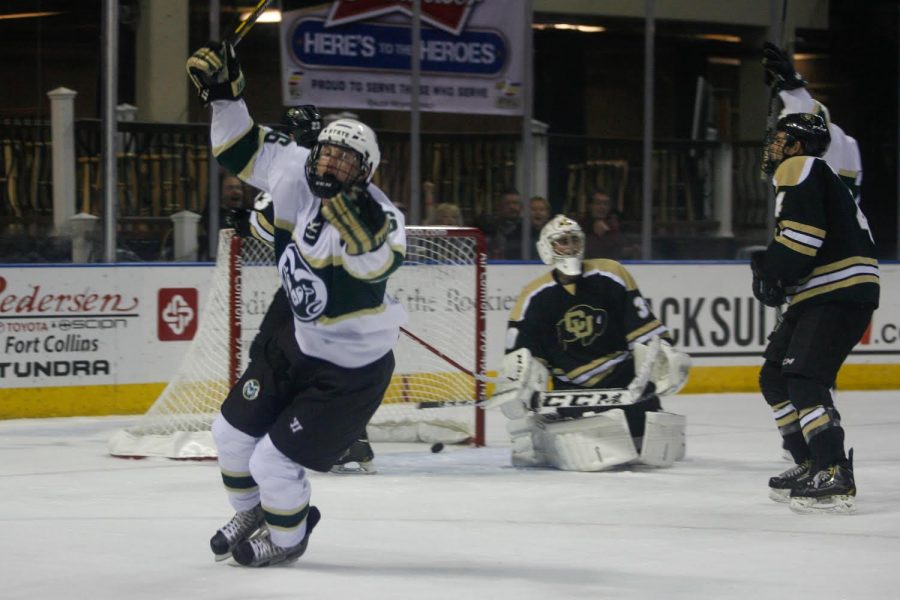 Austin Ansay put the Rams up early with a goal just a few minutes into the game, and that goal wouldn’t be answered until late in the second period. CSU put a lot of pressure on the net in the first period, and led in shots 13-8.

In the second, it was another story.

The Buffs were attacking the net avidly, and goalie Alex Steidler was under fire consistently. Pierce Maty of CU finally answered on a power play, but immediately after, Eric Waring put it top shelf to take back the lead for the Rams. In what seemed like a barrage of goals, CU tied it up yet again, scoring the third goal in merely two-and-a-half minutes.

In the third, Chris Guidotti scored two goals, including the game winner. He was named the “Star of the Night” but gave due credit to his teammates.

“We all just bought into our system and we played for each other,” Guidotti said, “We all wanted to win that game as a family and we definitely came out there with that mentality.”

The game came down to the wire, as it was 4-3 going into the final minute, but Justin Schneeberger scored on an empty net in the final seconds to seal the deal.

At 1-3 in the WCHL, the Rams are currently sitting at last in the conference. However, this conference win was a big one, and the team is hoping to carry their momentum further into conference play.

“We’re getting better with each week, and this is the type of game (against CU) that can take an entire season in one direction or the other,” head coach Eric Sunness said, “So it’s a great win for the Rams leading into the next couple of weeks.”

After falling to CU 3-1 a couple of weeks ago, the rivals are now split in their matchups. They will play again in January at the Pepsi Center.

“It was huge, we’re looking at this game as a turning point in the season,” Guidotti said, “They’re definitely a good team and we pulled together as a family, and it felt good to get the job done tonight.”

The Rams will square off against another conference team, Oklahoma, next Thursday November 13, at 8 p.m.