No. 9 CSU volleyball has opportunity to clinch a share of MW title 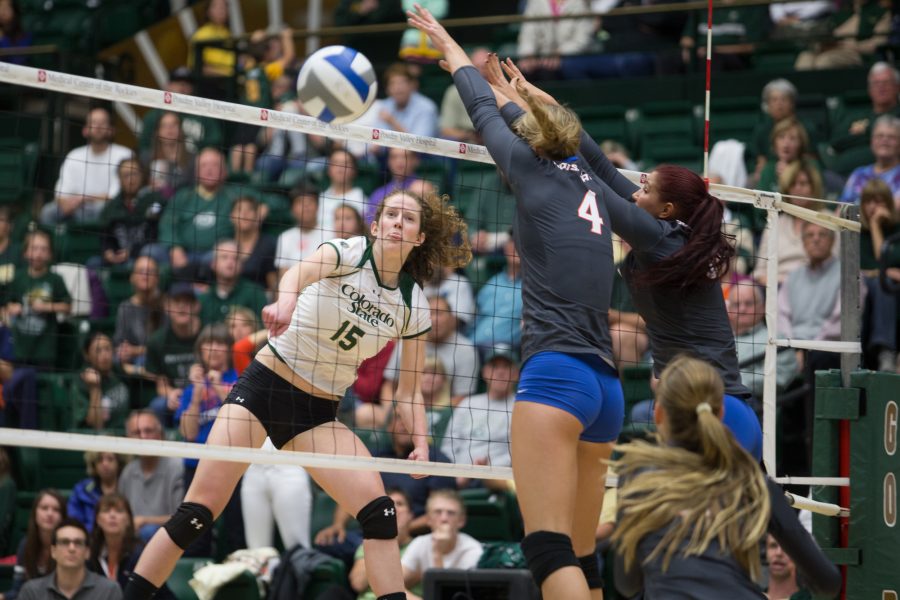 The climb to the Mountain West title is upon us, with five games left on the 2014-15 schedule and No.9 Colorado State awaits the magic number of three.

Heading into the second to last week of play, CSU holds a two-match lead over second place UNLV. The Rams need a combination of their wins this weekend against Air Force and New Mexico along with UNLV’s losses to reach three, giving CSU a share of the Mountain West title as early as Saturday.

“Our one goal right now is to win the Mountain West,” head coach Tom Hilbert said. “That is what we’ll continue to focus on.”

This weekend is one of the most important stretches thus far for CSU. The Rams return with 15 of their first 26 matches played away from Moby Arena. CSU who is 10-1 on its home court will take on the Falcons Thursday at 7p.m. and New Mexico Saturday at 1 p.m.

The Falcons have overcome their previous high for MW victories at five with a 6-8 record, still with several matches remaining on the season. Air Force is 12-16 overall with consistent performances all around the court, ranking in the top half of the MW for all categories except opponent hitting and service aces.

In the last appearance against New Mexico, CSU was able to shut down Lobos star Chantale Riddle. With Riddle limited in hitting, the Rams will need to contain her Saturday along with countering on the attack against one of the top defensive teams in the country. New Mexico ranks fifth in the NCAA for blocks (3.06 per set) and 10th for opponent hitting (.146).

Thursday’s match will be one for the record books, junior Jaime Colaizzi is three digs shy of 1,000. The Windsor, Colorado native would be the 11th CSU player to reach 1,000 digs in history.

The final stretch is crucial for the Rams in its ability to win its sixth-consecutive MW title as well as improving its chances of hosting the first round of the NCAA, last done in 2009.

CSU went up one spot in the Rating Percentage Index Monday to No.12, the Rams began the season at No.14 and have jumped around between 13 and 16 all season.