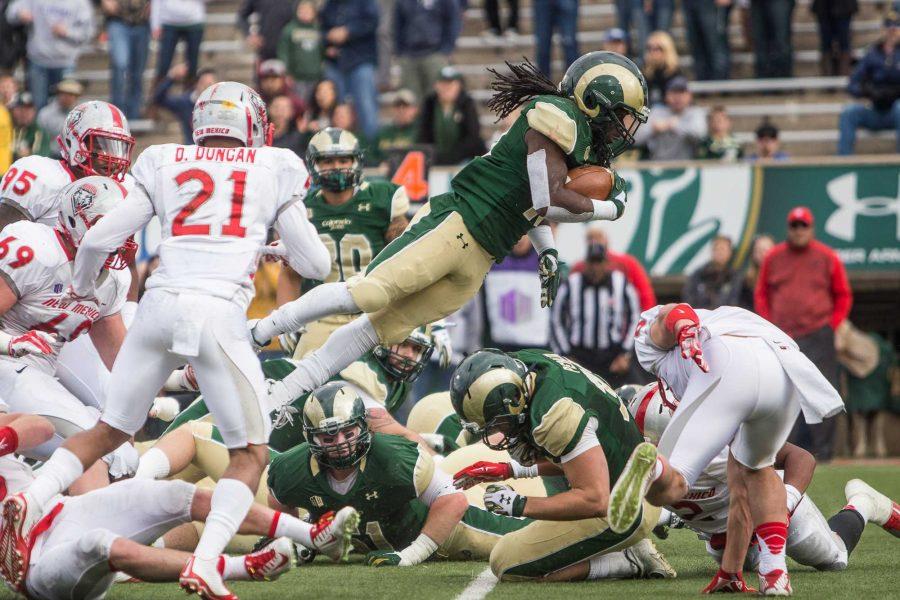 The potent Lobos rushing offense, which ranked No. 5 in the nation with over 381 yards per game entering Saturday, was shut down by sophomore cornerback Preston Hodges and the improving Rams defense. The Lobos mustered 301 yards on the ground, but only 356 total yards of offense in the contest, with most of those yards coming after the game was well out of reach.

The Rams now have a 3,000-yard passer (Grayson), 1,000-yard receiver (Higgins) and 1,000-yard rusher (Hart) for only the second time in school history, and their nine-game winning streak is a school-best since 1997. CSU also set a new school record for most total offensive yards in a single game (698).

Things started to go the Rams way on the opening kickoff when Hodges recovered a Lobos’ fumble. The fumble would prove to be the first of two New Mexico fumbles on special teams.

Grayson and the Rams took over at the Lobos’ 24-yard line and quickly capitalized on the turnover with a 7-yard touchdown pass to Higgins.

“We worked hard in practice all week,” Hodges said. “On special teams, coach always said we need to work on getting takeaways, and that’s what we did this week.”

Higgins was absent in CSU’s Nov. 8 matchup against Hawaii with a shoulder injury, but returned against New Mexico to continue breaking school records. At the end of the first quarter, Higgins caught an 11-yard pass to give him 1,298 receiving yards on the season, breaking David Anderson’s school record of 1,293 yards in a season which stood since 2003.

Although Higgins added yet another impressive performance to his Biletnikoff resume, it was Dee Hart who the Rams’ offense rode against the porous Lobos defense.

CSU led by just seven points after one quarter, but Hart and the Rams offense opened things up after a pair of New Mexico turnovers in the second quarter. Hart first scored on a 2-yard scamper when head coach Jim McElwain chose to go for it on fourth down with 11:45 left before halftime. His second score, a 6-yard touchdown run, followed a New Mexico fumble that happened just over a minute after the previous Hart score.

“I was just trying to lay it down for our seniors out there,” Hart said. “These seniors, they welcome you with open arms. That kind of touches your heart and make you want to go out on the field and end things on the right note.”

The Rams did allow New Mexico quarterback Lamar Jordan to run for a 10-yard touchdown with 6:49 left in the second quarter, but Hart made sure that the Lobos would not come back in the game.

After a Deionte Gaines kickoff return for a touchdown was called back due to a holding penalty, Hart quickly remedied the situation with a 76-yard touchdown run just two plays later. Hart’s fourth score of the second quarter came on a 20-yard pass from Grayson, which was set up by a 42-yard catch from Higgins.

The Rams entered halftime up 37-7 and never turned back. After receiving the ball to open up the second half, the Rams quickly drove down the field and scored on a Hart four-yard rush, his fifth touchdown of the game. With 5:57 left in the third quarter, Higgins caught a 28-yard pass from Grayson to cap a nine-play, 97-yard drive, CSU’s longest drive of the season.

CSU’s defense allowed Jordan to get another touchdown, an 11-yard rush, with 3:55 left in the third quarter, but Hart and the Rams offense continued to pile up points. Leading 51-13, Hart found another gaping hole in the Lobos defense and busted through it for a 55-yard rushing touchdown, his sixth and final touchdown of the game.

“(Hart) did his job. He came to play,” McElwain said. “I thought he did a much better job of one-cut runs, he’s a talented guy; a guy that’s become a true Ram.”

A Lobos touchdown from running back Teriyon Gipson with 11:11 left in the game capped the scoring and solidifed the 58-20 final score.

In the postgame press conference, Grayson reflected on his last game being one of his best in four years at CSU.

“It was a special moment,” Grayson said. “To go out the way we did today, it was something. I’m sure I’ll look back on it 10 years from now and really look at what we did today and be really happy with it.”