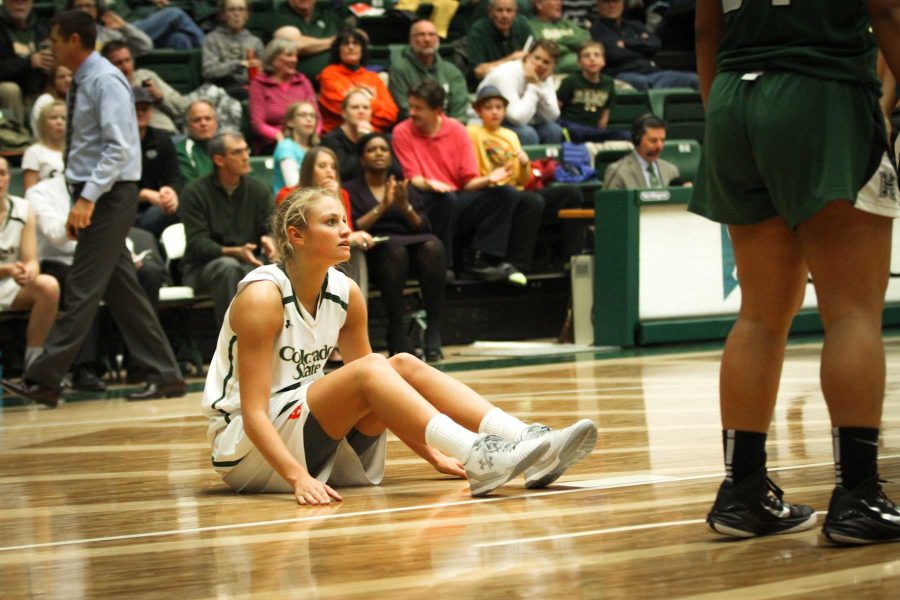 The back and forth battle couldn’t be decided in regulation, similar to their matchup last year ending with an overtime victory for CSU.

First-game-nerves of CSU produced several turnovers in the opening minutes, allowing Hawaii to control from the start.

The ‘Bows’ lead grew as large as ten in the first half before the Rams outscored Hawaii 22-12 in the final ten minutes of the first to go into the break down only one with a score of 29-28.

The second half started out well for the Rams as senior guard AJ Newton drilled a three pointer tying the game at 32 three minutes in.

The Rams captured their first lead of the night the following possession. A right handed flip in the lane by Newton moved the score to 34-32 Colorado State.

CSU’s Keyora Wharry found the net  for the Rams on a pull up jumper, and Victoria Wells followed with a put back bucket created by one of her game high 16 rebounds to cap off CSU’s 12-5 run beginning the second half.

Hawaii fought back, tying the game at 44 with a Shawlina Sagovia jump shot with five minutes left of regulation. The Wahine pulled ahead 46-44 with a fast break lay-up.

CSU stayed within reach as Ellen Nystrom rebounded a missed Newton runner, drawing a foul for two free throws that pulled the score within two, 46-48. CSU produced a quick turnover and Wells ended up finding Nystrom for a baseline jumper, tying the game at 48 with under two minutes to play.

A CSU stop was followed by a Nystrom miss, but Wells snagged another of her eight offensive rebounds and kicked it to Ryder, who drew two free throws, moving the score to 50-48 CSU with a minute left.

Hawaii’s Destiny King drew a foul on Wells with 52 seconds remaining, sinking both freebies and tying the score at 50, forcing overtime as neither team scored in regulation’s final seconds.

Gritt Ryder tried answering with a quick three, but missed. Kuehu drilled another clutch pull up jumper to seal the deal 61-55 with 27 seconds remaining in overtime.

Newton drilled her second three pointer of overtime on an assist from Gritt Ryder, pulling the game back within reach for the Rams, 61-58, but it was too little, too late as Colorado State fouled Hawaii’s Destiny King with 12 seconds left. King finalized the score at the line 63-58 for a Hawaii victory.

“I don’t know how we were in that game to be honest,” CSU head coach Ryun Williams admitted in the post game press conference.

“We made some poor decisions. We didn’t shoot it well, but sometimes that’s a reflection of the shots you’re taking and who’s taking them,” Williams stated.

CSU took 22 three-pointers compared to just 12 from the Wahine, who were able to establish a presence inside, scoring off post ups over Ram defenders. CSU’s Newton led all scorers with 16 points, helped by 4-9 three point shooting, but shot just 5-16 from the field overall.

“They were just more the aggressor tonight. They out-muscled us,” Newton admitted.

Hawaii outrebounded CSU 54-48, adding to the Rams’ trouble down low.

“We didn’t double on the block early,” Williams said. “We started doubling, and forced some turnovers. But early, they owned us on the block.”

“We can surely run better,” Williams said. “We saw some poor decisions made in transition. They’re very quick. Our guards had a hard time getting by them.”

“This isn’t the end of the world,” Williams continued. “It’s our first game and we lost to a good team.”