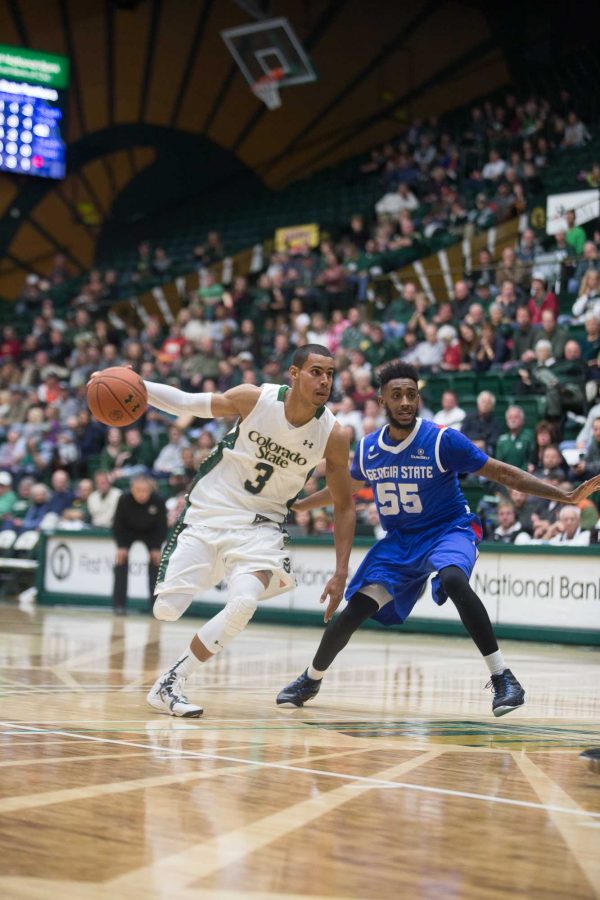 Georgia State had the two best players on the court Friday night at Moby Arena and it wasn’t even close. Guards Ryan Harrow, a Kentucky transfer, and R.J. Hunter, last year’s Sun Belt Conference player of the year are NBA-caliber prospects.

In the first 20 minutes against CSU, they showed exactly why. Between the two, they nearly combined (27 points) to outscore the Rams (29) in the first half. And like it did two seasons ago when the Rams faced Kendall Williams and New Mexico, it seemed CSU was headed for a long, long night.

But after playing all but one minute in the first half as well as every minute of the second half, Hunter hit a figurative brick wall midway through the second frame. His step-back three-pointers were still right on target, but just a bit short. The first step that he had used to blow by CSU defenders in the first half wasn’t quite as quick in the second half. While Harrow continued his hot shooting from the first frame, Hunter shot just 2 for 7 in the second, finishing the game with 19 points on 7 of 17 shooting.

“That’s who they are,” CSU head coach Larry Eustachy said of the Panthers. “(Ryan) Harrow is going to take the most shots and Hunter’s going to be right behind him. That’s what you will see in every one of their box scores and I’ve had teams like that but they drop off pretty quick after their (starting) five and we don’t.”

On the other side of the coin were the Rams, who shot an abysmal 31 percent in the first half, struggling to find any sort of offensive rhythm against the Panthers’ two-three zone. A team still trying to remember everyone’s name because of the amount of roster turnover kept turning the ball over themselves, giving the rock away nine times in the first half, which led 11 points off of those turnovers for Georgia State.

Though the Rams didn’t have the best players on the court, they did however have the best team. After senior guard Daniel Bejarano picked up his fourth personal foul just 1:53 into the second half, CSU inserted transfer guards Gian Clavell and John Gillon.

And what a difference they made.

While their offensive statistics don’t jump off the page (eight points, five rebounds, one assist), their fresh legs were key to CSU’s comeback. The duo, along with Joe De Ciman and Carlton Hurst, picked up the slack for Bejarano, combining to play 46 minutes in the second half, with Clavell playing 17 and Hurst playing 14, respectively.

“That’s the making of a good team,” forward J.J. Avila said of the Rams’ balance and depth. “Last year we basically had to rely on me and DB (Bejarano), but this year we have guys all around us that if Stanton (Kidd) isn’t having a good game, or me and DB aren’t having good games, those are kind the kind of games you need. We’re only getting better, we haven’t even scratched the surface yet.”

Unlike last season, when a poor-shooting first half would put the Rams in a hole they couldn’t dig out of, the ability to bring players off the bench who can immediately contribute has already paid huge dividends for CSU.

Georgia State may have had the two most talented players on the court Friday night, but CSU had the better team, and it wasn’t even close.