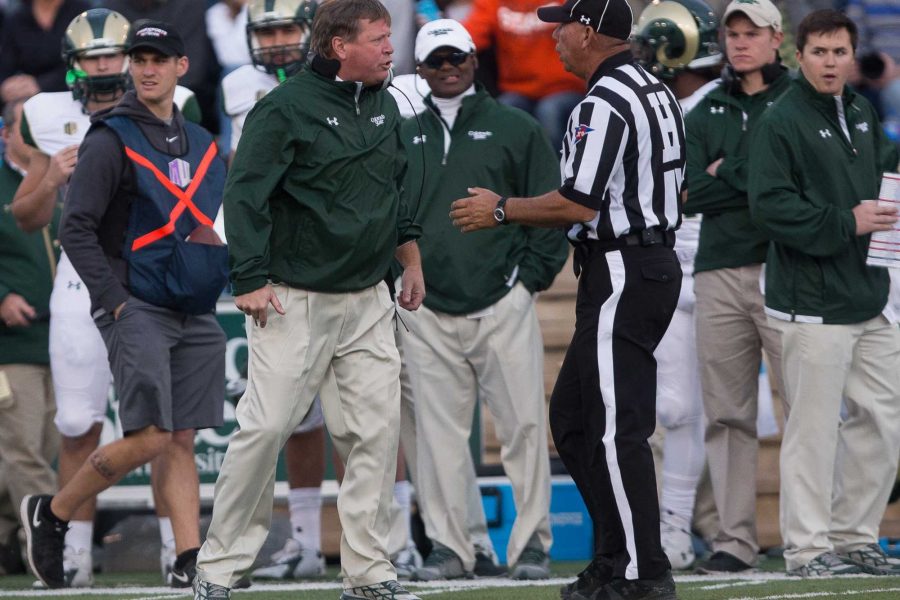 No. 21 Colorado State had crossed over into Air Force territory with 44 ticks left on the game clock as the head coach stared down a 4th down and 2 situation from the Falcons’ 42-yard line on Friday.

The distance was a tough spot to be in for both a punt and a field goal.

After all, CSU kicker Jared Roberts had missed a 43-yard attempt in the first half and would be looking at a redemption shot from more than 55 yards away for the game-winner. And, at that point, the Rams’ defense had surrendered 345 yards to an Air Force offense that was moving the ball well.

So McElwain decided to roll the dice and trust running back Dee Hart to move the chains.

His gamble backfired, and CSU (10-2, 6-2 MW) was eventually dealt a 27-24 loss at Falcon Stadium, where Air Force (9-3, 5-3 MW) finished its regular season with an undefeated record, snapping the nine-game winning streak the Rams were riding entering the game.

“There was no question. We were going to go for it and that’s kind of the way we do things around here,” McElwain said about his decision. “If you can’t get a yard, you probably don’t deserve to win anyway.”

The 32,650 people in attendance stood on their feet to watch Air Force defensive back Weston Steelhammer stuff Hart, who received the handoff to right, in his tracks which resulted in a turnover on downs.

That was the story of Air Force’s run defense on Friday. Last week against New Mexico, Hart racked up 230 yards and five touchdowns on the ground, averaging 11.5 yards per carry. But against Air Force, Hart was held to 115 yards on 23 attempts and never reached the end zone.

“Tough call. If coach Mac win it, then everybody ‘ooh-rah!’ But then (when) he lose, everybody want to criticize it,” Hart said. “We had an outside zone called and they just blitzed right into it. They had one more guy than we could block and they stopped it.”

The Falcons then went to work with 38 seconds remaining in regulation, which proved to be enough time to move the ball into Air Force kicker Will Conant’s field-goal range. In fact, two plays was all it took the Falcons to travel 32 yards to set up the game-winning kick.

Air Force quarterback Nate Romine, who was filling in for an injured Kale Pearson, connected with Garrett Brown across the middle for a 26-yard pass on the final play before the field goal unit took the field.

“They did a good job at hitting us down the seam (on the final drive),” linebacker Max Morgan said. “We like our field goal block team. And even down to three seconds left on the clock, we liked our chances to get after their field goal team.”

But the Rams didn’t.

Despite recording four blocked kicks entering the regular season finale, CSU was unable to get to Conant with the game on the line. He sent the ball through the uprights from 39 yards for his second field goal of the game to lift Air Force to its sixth straight home win against CSU.

“They reversed the field on us and their guy drilled it,” McElwain said of Conant. “Good thing is that guy is defending our country, man. He doesn’t choke under pressure.”

Collegian Sports Reporter Quentin Sickafoose can be reached at qsickafoose@collegian.com and on Twitter @QSickafoose.