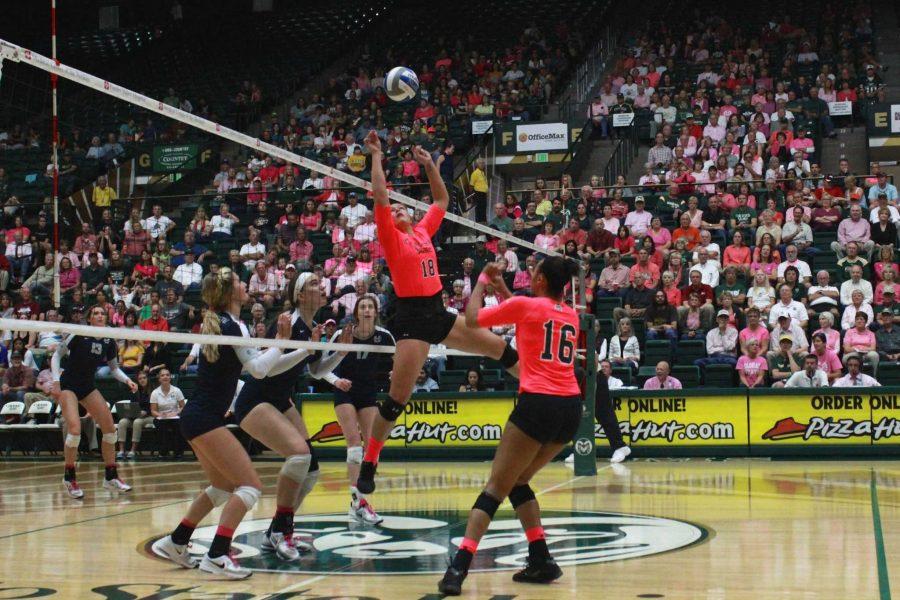 Setter Deedra Foss (18) jumps to set the ball for middle blocker Jaliyah Bolden (16) during the first set of Saturday's Pink Out game against Utah State at Moby Arena.

The No. 6 Colorado State volleyball swept Utah State Saturday afternoon to improve to 22-1 overall and 10-0 in the Mountain West Conference.

Saturday’s match looked a lot closer on the court than it did on paper. CSU out hit Utah State .216 to .009 with 44 kills, four service aces and 11 blocks. Like many of the Rams games this season, their defense was the real story

“You know 15 unforced errors in 111 swings is not acceptable,” Hilbert said. “That can lose sets for you in certain situations so we have not been doing that. It is uncharacteristic of us, I am going to write it off as just not a great match for us. I am not sure it was anything Utah State was creating.”

Utah State had several impressive plays diving across the court to dig the ball but many of those jaw dropping digs still ended with a point for the Rams.

“We did our job in terms of neutralizing what they wanted to do offensively and I don’t want to sound like I am disappointed in my team because I am not,” Hilbert said. “We executed that point of it very well. Offensively, we did not have a great match.”

“What’s beautiful about this team is that all the other phases they stay with it,” Hilbert said. “It doesn’t impact them. So from the stand point of score we were hanging in there with Utah State, staying close enough and winning these matches and then the game. That’s really good stuff.”

“Its just awesome knowing all the stories, listening to them reminisce about the time that they were here and just how special they found Moby and CSU to be. And just to know you are going through it right now and that you are apart of something so special,” Culbert said.

Up next, the Rams will travel west for a tough road series at UNLV and San Diego State. The Aztecs were the only team last season to defeat the CSU while the Rebels are one of two teams this season to win a set against the Rams.