Kevin Davis trades in skates for cleats in journey to Ramhood 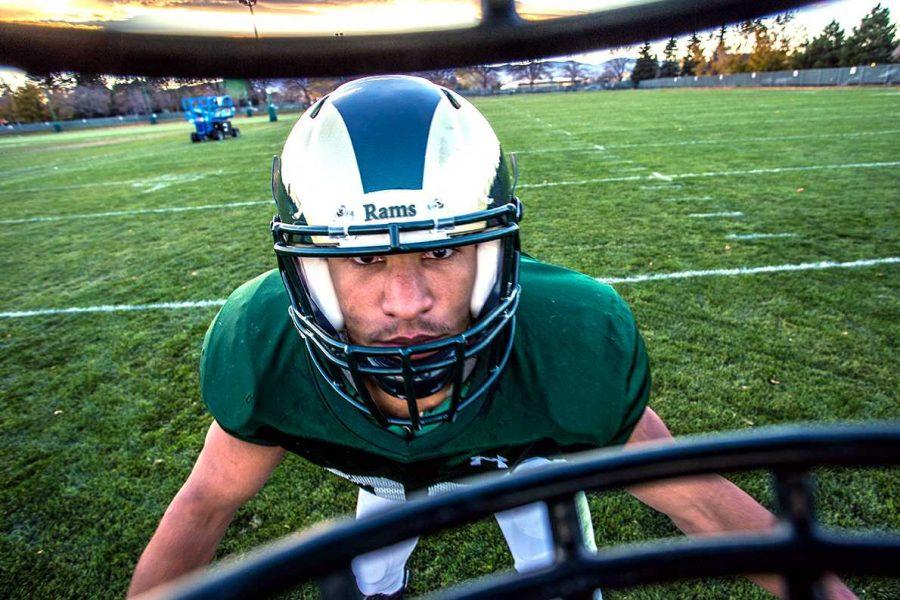 Colorado State linebacker Kevin Davis has overcome knee and shoulder injuries to be a key contributor for the Rams this season. (Photo credit: Eliott Foust)

“I sent him to American preschool so he would have to speak more English,” said his German-born mother, Marion Davis. “He only wanted to speak German.”

Talking to him now, not a whisper of German can be heard in his deep baritone, but Davis carries his German heritage with him in other ways. For one thing, he grew up dreaming of professional ice hockey — not football.

At the tender age of five, having a year of soccer already under his belt, Davis’ mother took him and his little sister to the local ice rink to teach them how to skate. A natural athlete, Davis impressed a coach, who was starting a little league hockey team, and was asked to play.

An avid fan of the hugely popular 90s movie, “The Mighty Ducks,” Davis was more than thrilled to play hockey. Davis played in Germany for three years before his father Keith Davis, an Army soldier, was stationed in Washington.

There, he continued to develop his natural talent on the ice before ever setting foot on a football field.

That would come later.

“Kevin was a hell of a hockey player — it was very big over there (in Germany),” his father Keith Davis said. “He was the team MVP for three years and led his team in scoring.”

Davis played hockey until his senior year of high school, finally hanging up the skates in favor of a pair of cleats. In seventh grade, when Davis was living in  Texas, he decided to give football a try.

Once again, Davis had a natural talent for the game. The Davis family moved one final time, to Colorado Springs, where Davis would leave his mark as a football player at Fountain-Fort Carson high school.

“You know, he never really came off the field. He led his team with (a school-record) 165 tackles, he played tight end, middle linebacker, he was the kicker, the punter — I was glad he went the football route,” Keith Davis said. “He loves the game.”

Davis managed all of that while playing hockey for a different school and maintaining a 3.86 GPA. He graduated on the honor roll.

And now, as a sophomore linebacker at Colorado State, Davis has overcome a series of injuries and come back stronger. After suffering a knee injury his true freshman season that sidelined him nearly two seasons, he had to sit out two games this year due to a shoulder injury.

“A lot of people invested in me, my parents, my family, coaches, my hometown, and I knew it wouldn’t last forever,” Davis said of overcoming injuries. “Being a part of the change here — that’s the most exciting part.”

His hit on Colorado quarterback Sefo Liufau was instrumental to the Rams’ Rocky Mountain Showdown victory, and his knock on Utah State quarterback Darrell Garrettson forced Garrettson out of the game, which the Rams went on to win.

Davis has become a regular contributor on defense, recording 10 tackles in five games this season.

However, when asked about a personal achievement, Davis will find a way to shift the praise on someone or something else.

“The biggest thing I taught my kids is to always be humble and never forget where you came from,” he said. “Now, they motivate me. I’m so proud of them. It feels real good.”

From German-speaking hockey player to humble quarterback-slayer, Davis hopes this is just the beginning to memorable career as a Ram.

Collegian Sports Reporter Micky Rastrelli can be reached @sports@collegian.com or on Twitter @c_rasta5.