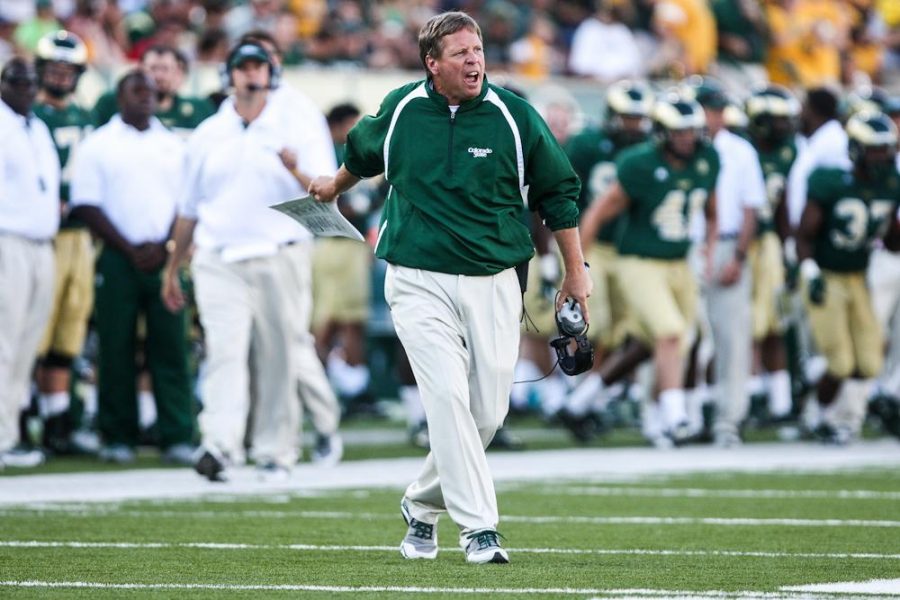 Colorado State Coach Jim McElwain reacts to a call made in the second quarter of Saturdays home loss versus North Dakota State Unveristy. CSU was defeated 22-7 in front of a sold out crowd at Hughes Stadium.

Colorado State was not among the 25 teams listed in Tuesday night’s inaugural College Football Playoff Top 25. The Rams, despite receiving votes in both the USA Today and Associated Press coaches’ polls, were on the outside looking in.

However, that will likely change should the Rams win this weekend at San Jose State in a game they are favored in by a touchdown. CSU (7-1, 3-1 Mountain West) holds a favorable schedule the rest of the way, playing just one team with a record above .500 (Air Force) in their final four games.

But to reach the Mountain West championship game and a possible berth in a coveted New Year’s Day bowl, the Rams will need some help. After an early-season loss to Boise State, CSU sits in a tie atop the Mountain Division with the Broncos. But due to their head-to-head win over the Rams, Boise State holds the tiebreaker should both teams run the table until the end of the regular season.

To leapfrog the Broncos, CSU will need them to lose one of their final four games while remaining undefeated in its final four contests against San Jose State, Hawaii, Air Force and New Mexico.

For head coach Jim McElwain though, there is more at stake than just winning the rest of their games and finishing 11-1 for the first time since 1997-98.

In McElwain’s contract extension, signed earlier this year, the third-year coach’s base salary will jump from $1.5 million to $2 million if the Rams are in the CFP Top-25 when the final rankings come out on Dec. 7. That means, for the rest of the time he is the head coach at Colorado State, McElwain will earn at least $2 million.

And should the Rams play in a New Year’s Day bowl as CBS Sports’ Dennis Dodd predicted? McElwain’s salary jumps to $2.5 million.

And should the Rams happen to win that game? McElwain’s base salary jumps to $2.75 million, almost double what his base salary this season is. That would make him among the top-30 paid coaches nationally according to USA Today.

While it is still wishful thinking to assume Colorado State will play in a New Year’s Bowl Game, let alone win the Mountain West this season, if the Rams can pull it off, you might see several hundred thousand dollars added to McElwain’s million-dollar grin.