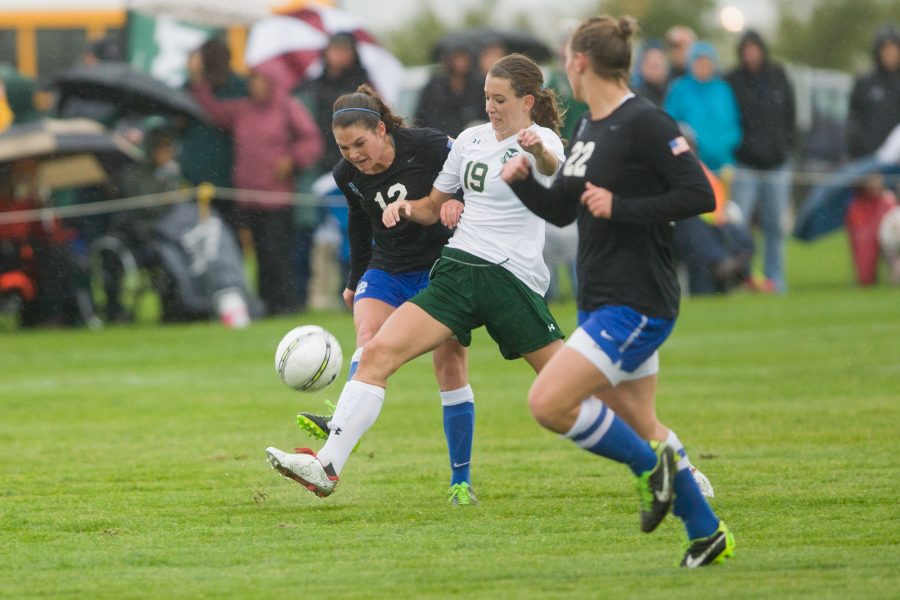 The Colorado State women’s soccer team lost 1-0 on the road to the Utah State Aggies Sunday, the Rams’ second conference loss of the weekend after falling to Boise State on Friday.

Colorado State kept the match scoreless until the 84th minute when Utah State’s Ambryn McCallson punched in the game-winner on an assist from Wesley Hamblin.

The Rams were strong in the defensive third throughout the game, keeping the ball in the midfield and out of the control of Aggies forwards for the majority of the match, but were unable to muster up an effective enough attack to light up the scoreboard. Colorado State’s first shot on goal didn’t come until the second half in the 56th minute from Catherine Ruder.

Though it was another scoreless outing for the Rams, their eighth of the season, CSU head coach Bill Hempen was impressed with his team’s performance against a Utah State team that tied perennial national power Colorado College last weekend in its Mountain West conference opener.

“We played one of our best games tactically of the year,” Hempen said. “I really believe we got better today because there were moments we had not seen from this group that would make the founders of the game proud. That as a coach is great to see.”

Goalkeeper Jesse McGinley was on point for a career-high eight saves to anchor the Rams’ solid defensive game.

Dangerous opportunities were generated by the Rams in the second half by forcing corner kicks as well as two free kicks that set up shots, but none found the goal.

While the fundamentals came together for the Rams, they were unable to overcome the fatigue of the first conference road trip of the season to keep the Aggies off the scoreboard toward the end of the match.

“(Our) second game in 36 hours did us in at the end,” Hempen said. “We have a lot of players playing a lot of minutes. It was a hot day and we ran out of gas.”

“We’re ready to come home for two next week,” Hempen said of the Rams’ return to Fort Collins for two Colorado Cup conference matches against Air Force and Colorado College on Friday and Sunday, respectively.

Air Force appears to be much improved from last year’s 3-13-2 record with five wins on the year already, two coming over Utah State and Boise State, which Hempen described as a “much better team” than the Rams after their loss Friday.

Colorado College is off to a 6-3-3 start on the season, with wins over Boise State and New Mexico in the conference.

The Rams will kick off with Air Force Friday at 4 p.m. on the Lagoon Field, and 1 p.m. Sunday with Colorado College.