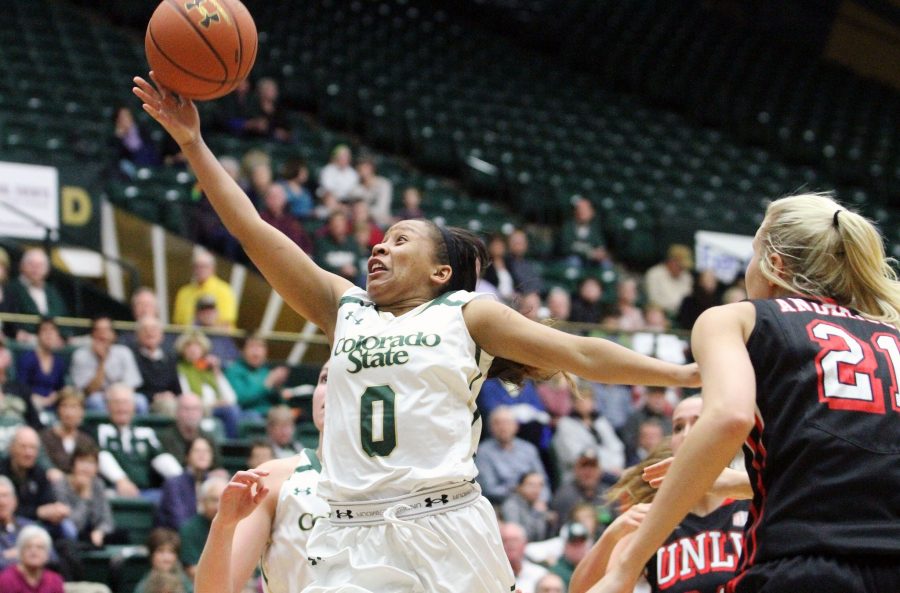 Junior Guard AJ Newton (00) goes for two during the Lady Ram victory over the UNLV Rebels Wednesday night at Moby. The Rams came from behind the half to win 84-64.

The CSU women’s basketball head coach and his team had torn through their 2013-14 campaign, racking up 23 wins and dominating the Mountain West to claim their first conference crown in 12 years before the regular season slate had even concluded.

But a 9-point defeat to the Bulldogs in the MW tournament title game in Las Vegas was the only mishap that kept CSU from reaching its first NCAA Tournament since 2002.

“We experienced a lot of good fortune last year. We won a lot of games and we got hot,” Williams said. “But last year’s stuff is last year. I’m excited about this group we’ve got now.”

He didn’t want to talk about the past; Williams was more electrified about the future.

Earlier this month, CSU was projected to repeat its first-place finish in the MW preseason poll, receiving 21 of 28 first-place votes. That vote was likely based on the amount of last year’s production that will be returning for 2014-15.

The Rams are bringing back four starters from last year in senior guards A.J. Newton and Gritt Ryder, sophomore forward Elin Gustavsson and sophomore guard Ellen Nystrom, who was named to one of the five spots on the preseason all-Mountain West team.

CSU is also expected to look to junior forward Emilie Hesseldal, who was important to the Rams’ success coming down the stretch of last season, according to Williams.

“I think that helps, but you’ve got to win with more than four kids,” Williams said. “We have five kids who played quite a few minutes last year. And (on) our bench, we’ve got some kids that have played a lot of college basketball.”

In addition to the returners, seven names are new to this year’s roster, four of which belong to transfers.

Keyora Wharry will be coming in as a junior forward from Fresno City. Williams says she has a scoring mentality, is extremely athletic and is good with the ball and driving to the basket. Jamie Patrick, a junior guard, brings a shooting element from a winning program in Hutchinson, Kansas.

Listed at 6-foot-4, junior forward Alana Arias is a native of Brazil and a transfer from Palm Beach State who is skilled on the block.

They each present a different strength that Williams is excited about.

Myanne Hamm is the only in-state product of the three players entering from high school. She led last year’s Poudre High School team in scoring and helped the Impalas reach the Final Four in the Class 5A state tournament.

“It’s exciting because we were them last year,” Newton said. “They’ll build off the energy we have, and I think they’re reading us and looking to us returners to know what’s going on out there.”

The 2014-15 CSU squad will get its first chance to play together Thursday night in an exhibition with Metro State at Moby Arena at 7 p.m. The Rams will host their first three regular season games Nov. 14-23 against Hawaii, Colorado School of Mines and Illinois State.

Boise State will be CSU’s first Mountain West opponent Dec. 31 on the road.

“This group has potential to be a darn good team,” Williams said. “The thing I like is they know nothing from last year will be given to them; they’ll have to go out and get it.”

Collegian Sports Reporter Quentin Sickafoose can be reached at qsickafoose@collegian.com and on Twitter @QSickafoose.