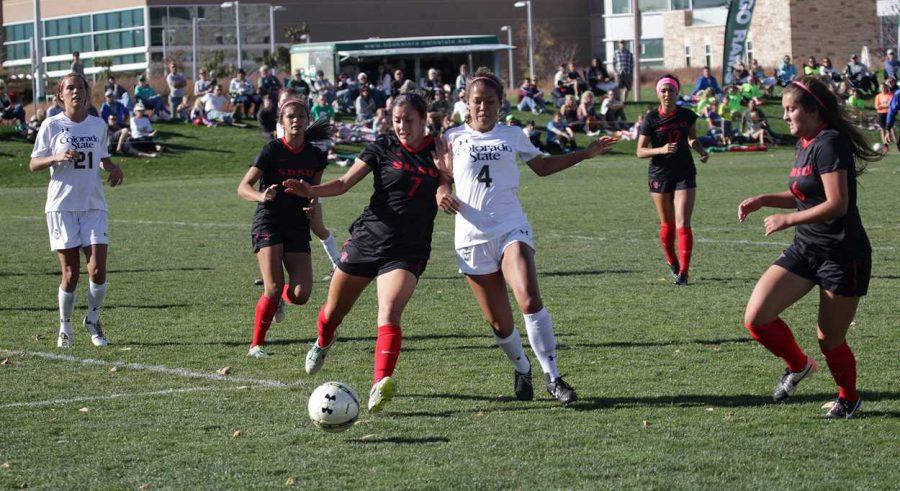 The last home match of the season for the Colorado State women’s soccer team ended in a heart-wrenching double overtime loss for the Rams to San Diego State Sunday afternoon.

The Aztecs came into Fort Collins with an 8-1-0 record in the Mountain West, standing in first place. The 11th-place Rams gave the conference power a true run for their money, though, playing a totally even match for 90 minutes of regulation. Neither team could light the scoreboard in a physical defensive battle.
Things looked good for the Rams at the end of regulation when San Diego State freshman forward Angela Mitchell picked up her second yellow card, warranting a red card ejection, for pulling on the jersey of CSU’s Gianna Bertana in the 85th minute. The ejection forced the Aztecs to play a man down the remainder of the match.
But the conference leader appeared poised against Colorado State’s one player advantage, holding the Rams from scoring through the first overtime.
CSU midfielder Jessica Jochheim went down with an injury in the first overtime and had to be carted off the field and replaced by freshman Maddi Rodriguez.
The second overtime began with the Rams controlling the ball to produce several shots against SDSU’s disadvantaged defense, but none found the back of the net.
The Aztecs finally put the first score on the board in the 105th minute while down a player when freshman forward Aliyah Utush rolled one past Colorado State goalkeeper Jesse McGinley in a scramble at the top of the box.
“This game was a total heartbreaker,” CSU junior defender Megan Speed said. “But everyone is so proud of each other for how we played.”
San Diego State secured the regular season Mountain West championship for the third straight season with the 1-0 double overtime win Sunday. With only one more conference match remaining on the schedule, the Aztecs’ current 9-1-0 record is impossible to match for second place 8-2-0 Wyoming.
With the loss, Colorado State slides to 4-14-0 on the year and 2-8-0 in Mountain West play, keeping the Rams in second-to-last 11th place.
The Rams’ provision of true competition for the conference champions in only their second season as a program was a positive sign to CSU head coach Bill Hempen, though.
“Sports have to be witnessed to be appreciated,” Hempen said. “For the rest of the world, we’re 4-14, but I think we’re better than that. Toe to toe, at times, I thought we were the better team (today), but because they’re champions, they find ways to win. That’s what makes champions.”
The double overtime thriller with the Aztecs was the Rams’ last home match of the season. Each of the Rams’ four wins have come at home, where they nearly finished .500, posting a 4-6-0 record on the Lagoon Field.
Colorado State’s three seniors Jami Vaughn, Catherine Ruder and Maggie Sherman received an honoring ceremony after the match in which Hempen thanked the trio for their hard work and dedication to helping start CSU’s program.
“(Next year) I’m going to be lost without Jami and Catherine back there,” junior defender Megan Speed said.
Following the nail-biter with the conference champs, though, Vaughn expressed extreme optimism for the future of CSU soccer, despite their departure from the program after this season.
“(The way we played today), it honestly means we could easily win the conference next year,” Vaughn predicted. “The fact that they didn’t have many counters on us and we controlled most of the game is a huge positive.”
The Rams travel to Wyoming Friday to seek their first win on the road in the conclusion of their second season.
That game kicks off in Laramie at 3 p.m. Friday. The match will be streamed for free online on the Mountain West Network.
Collegian Sports Reporter Sam Lounsberry can be reached at sports@collegian.com and on Twitter @samlounz.
Delete Image
Align Left
Align Center
Align Right
Align Left
Align Center
Delete Heading