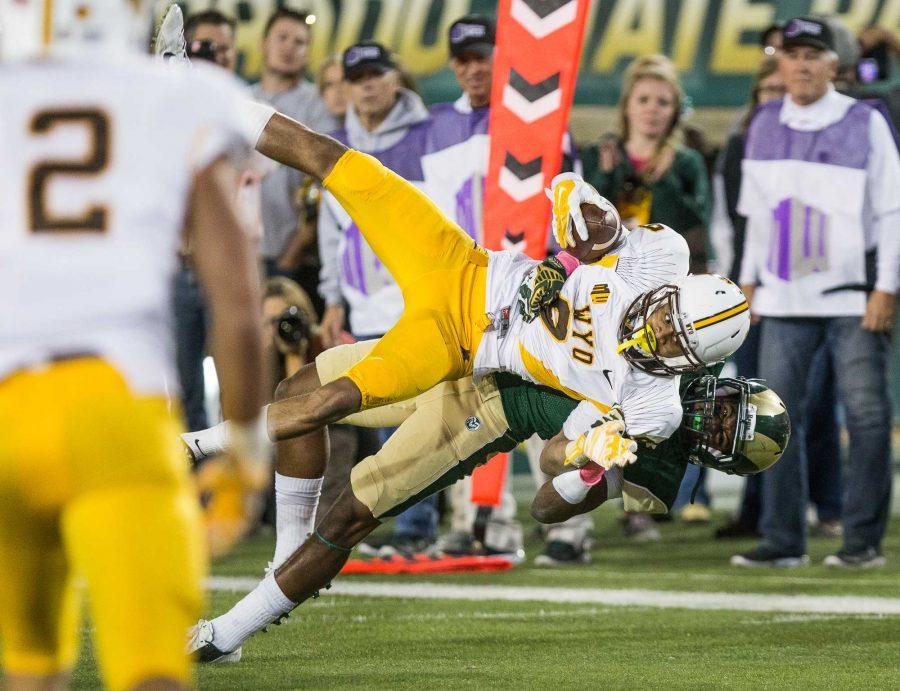 In front of 32,529 fans at sold-out Hughes Stadium, Colorado State quarterback Garrett Grayson went 18 of 21 for 390 yards and five touchdowns, and wide receiver Rashard “Hollywood” Higgins caught five passes for 174 yards and two touchdowns as the Rams trounced the Wyoming Cowboys 45-31 in the 106th edition of the Border War.

On a day when the Rams offense had their way with the Cowboys defense, Grayson broke Moses Moreno’s school record of 51 career touchdown passes and Higgins became the first CSU receiver in school history to catch more than 10 touchdowns in a season.

“I’m just doing my job,” Higgins said. “That’s the way they game-planned me, but at the end of the day, I’m just catching the ball, getting up field and doing what I’m supposed to do.”

Wyoming quarterback Colby Kirkegaard finished the game 24 of 38 for 335 yards and running back Brian Hill finished with 28 rushes for 121 yards.

CSU scored on an early 20-yard field goal from Jared Roberts to take a 3-0 lead, and following a Wyoming three-and-out, Grayson and the Rams put together another scoring drive capped by a 21-yard pass to running back Dee Hart for a touchdown to give the Rams a 10-0 lead with 6:42 left in the first quarter.

The Rams’ defense allowed only one big Cowboys play in the first quarter, a 46-yard pass from Kirkegaard to wide receiver Jake Maulhardt over the head of cornerback DeAndre Elliot. The pass set up Cowboys kicker Stuart Williams for a 31-yard field goal to cut the lead to 10-3 with 0:51 left in the first.

Grayson and Co. opened the second quarter with a 65-yard touchdown to wide receiver Joe Hansley that gave Grayson the record for most career completions in CSU history (558). On the next drive, the Cowboys were forced to settle for a 47-yard field goal attempt, but it was blocked by strong safety Trent Matthews, his second field goal block this season.

The blocked field goal with 11:37 left in the second quarter led to a 43-yard touchdown pass to Higgins, who became the first receiver in the Mountain West to reach 1,000 yards in 2014 despite being man-covered by Wyoming all game. Grayson finished the first half of play with just a single incompletion, going 15 for 16 for 270 yards and three touchdowns, and the Rams offense outgained the Cowboys offense 328-179.

Entering the second half up 24-3, the Rams offense never took their foot off the pedal. Following a failed Wyoming drive, Grayson quickly got the Rams down the field and threw his fourth touchdown of the day, a 26-yard catch-and-run to wide receiver Xavier Williams to give the Rams a 31-3 lead with 10:44 left in the third quarter.

Wyoming was finally able to gain some momentum on a 13-play, 75-yard drive that ended in a Brian Hill one-yard rushing touchdown to close the gap to 31-10 with 4:24 left in the third. However, 19 seconds later, Grayson and the offense would strike again.

On the first play of the ensuing drive, Grayson hit Higgins for a 73-yard touchdown to give CSU a 38-10 lead and take the momentum back from Wyoming. Grayson’s fifth touchdown of the day extended his CSU record to 53 career touchdowns, but he wasn’t concerned with any passing records.

“Any time you start thinking about records it takes you out of your game,” Grayson said. “You try to force things instead of just letting things happen and just come to you.”

Early in the fourth quarter, the Cowboys put together a solid drive and scored on a 1-yard run by Brian Hill to make the score 38-17, but the Rams answered with a six-yard rushing touchdown from running back Treyous Jerrells to make the score 45-17 with 11:49 left in the game.

The Cowboys scored two fourth quarter touchdowns, one on a 32-yard pass to Jalen Claiborne and the other on a 38-yard pass to Tanner Gentry, to bring the score to 45-31.

“I’ll take the rivalry win anytime,” CSU head coach Jim McElwain said. “At I told (my team), I think we’re something like ‘something-and-one’ now with more wins than we have losses and you know what, we should feel good about that.”