Can CSU volleyball solve the Riddle? 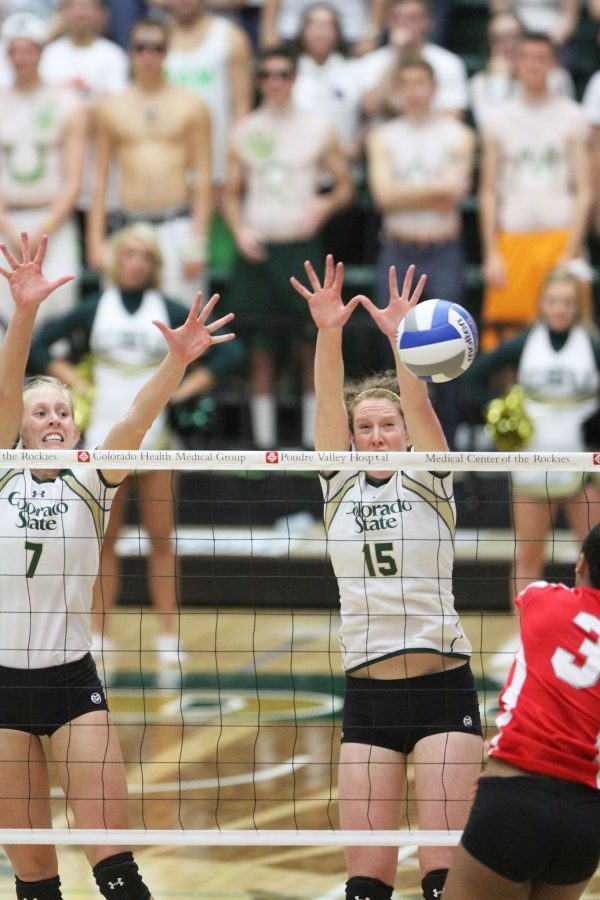 Kelsey Schnider (7) and Marnie Renyolds (15) go for a block in the last set against the New Mexico Lobos in Moby Thursday. The Rams beat the Lobos 3-1 sets, remaining undefeated.

Riddle was the Lobos go-to player in 2013 as she led the team and the conference with 468 kills and 4.17 kills per set. From the start of the 2014 season, she has picked up right where she left off, as she continues to hold the top spot in the conference for kills with 231 and 3.73 per set.

If Riddle continues at this pace, she will not only break last seasons records, but also be a bigger threat to the Rams than ever.

“She  is very pivotal, she is someone that you are constantly aware of leaning towards and it opens it up for other people,” CSU head coach Tom Hilbert said. “She is the most dynamic player in the league without a doubt.”

To prepare for Riddle on the right side, CSU has a male left handed practice player who is meant to simulate a similar attack to what the Rams can expect Riddle to be. While UNM will depend on Riddle for the majority of its offensive attack, its eggs are not all in one basket. If CSU contains Riddle, the Lobos can rely on its middle blockers and outside hitter Cassie House.

CSU will be successful Thursday if they contain Riddle, slow down both players in the middle and continue to play strong on defense as they have consistently from the start of the season. The Rams proved no deficit is too much to overcome and can never be counted out of a comeback.

With a late rebound to sweep Wyoming on the road followed by a dominating performance against Fresno State last week, CSU remained the only undefeated team in conference play after three weeks. The Rams have a 13-game winning streak heading into what many would say is the one of the hardest places to play in the nation, and CSU’s perfect 7-0 record on the road will be on the line when the teams face off in Albuquerque.

“It is probably my least favorite place to play,” junior opposite hitter Adrianna Culbert said. “It is just a really competitive atmosphere and New Mexico is just one of those games you have to go in prepared, knowing that it is going to be a hostile environment.”

Despite CSU’s resilience on the road, playing at the Johnson Center can fluster any team. The Lobos are gunning for the Rams especially after UNM battled back in set three and four to force a fifth set in their last meeting. New Mexico took a three-point lead before the Rams comeback won the match.

“I know it is going to be a battle again, I know quite a few players on their team and just speaking to them I know that they are not going to let it be easy,” middle blocker Kelsey Snider said. “We are very competitive so its is just going to be a good hard fought head-to-head battle.”