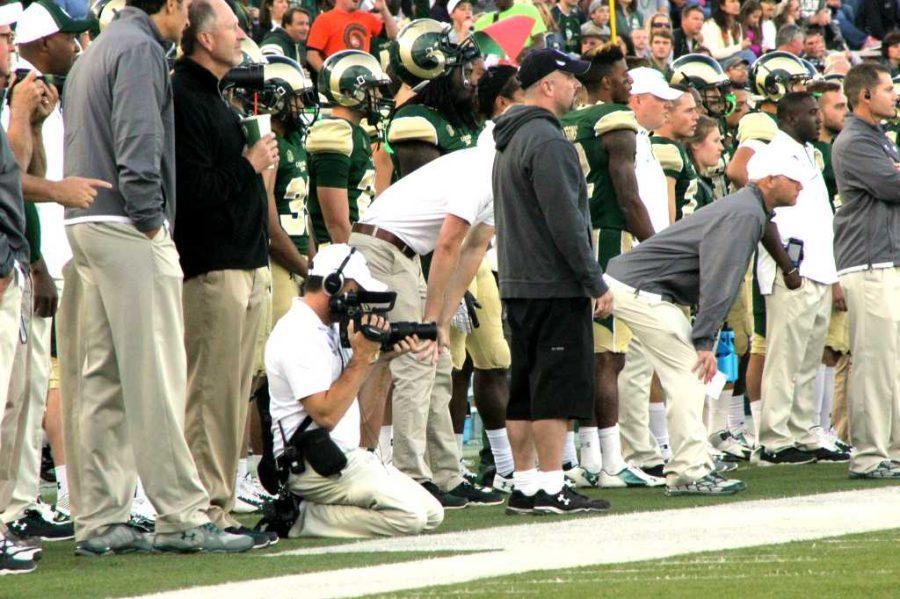 It’s practice five days a week, every tackle, rush and pass. It’s your attitude on and off the field during the off season and the season. It’s juggling school with your passion. It’s early mornings and late nights. It’s standing next to family on the field.

At the beginning of the offseason, Colorado State head coach Jim McElwain introduced the theme of “The Climb” to his team. It’s concept is simple: improve one step at a time. At the same time, the video series “The Grind” began filming, which takes an inside look at CSU football and chronicles McElwain’s concept of “The Climb” through the stories of the players.

The man behind the camera and the idea is Stan Gilliland, the assistant video coordinator for the team. Even though the project began in the offseason, the idea came to Gilliland years before.

He graduated from CSU in 2009 with a degree in journalism. After graduation he worked for the Cincinnati Bengals where he edited clips into highlight material.

He went to the Broncos after the Bengals and then left the NFL all together to work for the University of Wisconsin. With the Badgers he worked on their video series called “The Camp.” But, he saw a flaw in that series.

“They did the camp, but it would end at camp, just like Hard Knocks on HBO,” Gilliland said. “It ends at camp, because realistically coaches don’t like that to go into the regular season (with) cameras in the locker room, all that might change the mindset of a guy that would do something that he otherwise wouldn’t do if a camera wasn’t around.”

After two years at Wisconsin, he heard about an opening at CSU and immediately jumped at the opportunity. Soon after arriving back in Colorado he met with McElwain to discuss the possibility of “The Grind.”

“And, he completely embraced it. He thought the kids deserved it, he thought the people on the outside deserved a look in,” Gilliland said.

Gilliland combines game footage with interviews he sets up early each week to construct each episode. He spends most of his days organizing footage, which he says is the key to the project. Then his grind begins. It’s a rush for him to find a story within the footage and to edit it. He says there have been many late nights, sometimes he sleeps on the floor in his office and sometimes he won’t leave his seat for hours, even days, just to edit.

But, this isn’t unusual in the staff of the team. Without his boss, Brett Tews, he wouldn’t be able to make “The Grind.” Tews has taken the responsibility of capturing film for the team, which is a responsibility the both share. He went on to say the entire office is extremely dedicated, each putting as much as 80 hours a week for the team.

And, the hours reflect the product.

“It illustrates what we do, day in and day out, and I think that’s really important to have the fans see what we do and it helps us remember what we did in the past and what we did to win those games and how we move forward in the future,” said junior starting center Kevin O’Brien.

“The Grind” can be found on Youtube, with new episodes coming out weekly.

Collegian Reporter Lawrence Lam can be reached at sports@collegian.com or on Twitter @LawrenceKLam.