No. 6 CSU rolls over New Mexico on the road 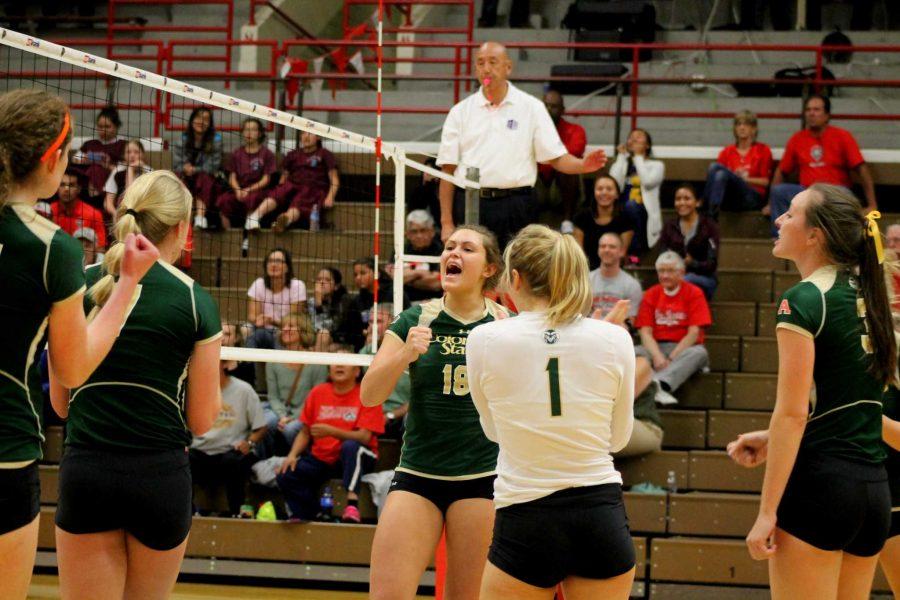 New Mexico had its hands full.

With its ability to shut down Chantale Riddle and Cassie House, digs balls and win points at pivotal points in the match No. 6 Colorado State continued to prove why it is the team to beat in the Mountain West. The Rams (19-1,7-0MW) swept the Lobos (11-8,4-3MW) at Jefferson Center 25-17, 25-23, 25-22,  making tonight’s victory their 14th-straight win and 25th-consecutive road win.

“I just think our team has incredible composure,” head coach Tom Hilbert said. “I think overall Dri (Adrianna) Culbert played really really well today, she never got shaken, did a fantastic job hitting the ball, passing the ball, serving, playing defense and we really out defended New Mexico and played the game better than they did and that is what made us win.”

Culbert was all over the court. With 12 kills on 22 attempts, nine digs and one block, New Mexico never knew what her next move was going to be and could not counter her attack because she was there to defend it.

“I think it was a great competitive match by our team to win tight sets in the end and you saw a lot of people making big plays,” head coach Tom Hilbert said.

There were very few balls libero Jaime Colaizzi did not get a hand on with 15 digs on the night, setter Deedra Foss racked up 38 assists and  Kaitlind Bestgen cut down the only lead the Lobos had all match.

Riddle was expected to be a force to be reckoned with heading into Thursdays match but turned out to be a player CSU could contain and manage. Riddle had nine kills on 25 attempts, finishing the night hitting .080. Devanne Sours also had nine kills followed by House with eight.

The Lobos had 24 attack errors, four service errors and one blocking error. Those points New Mexico gave away were a big factor why it was not able to chip away at the Rams.

“I’m proud, I am just very proud,” Hilbert said. “They are a great competitive bunch and they compete and play volleyball as well as any team we have had.”

Thursday’s win not only boosts the Rams momentum heading into a match with Air Force Friday but it continues to show every aspect this team has. With a well-rounded offense continuing to improve across the court and a solid defensive performance in every match, CSU has only one place to go from here. And that is up.

hes at home, you get a road game here in this conference and it really sets you apart from some people. We are staying consistent and I am super happy about it,” Hilbert said.