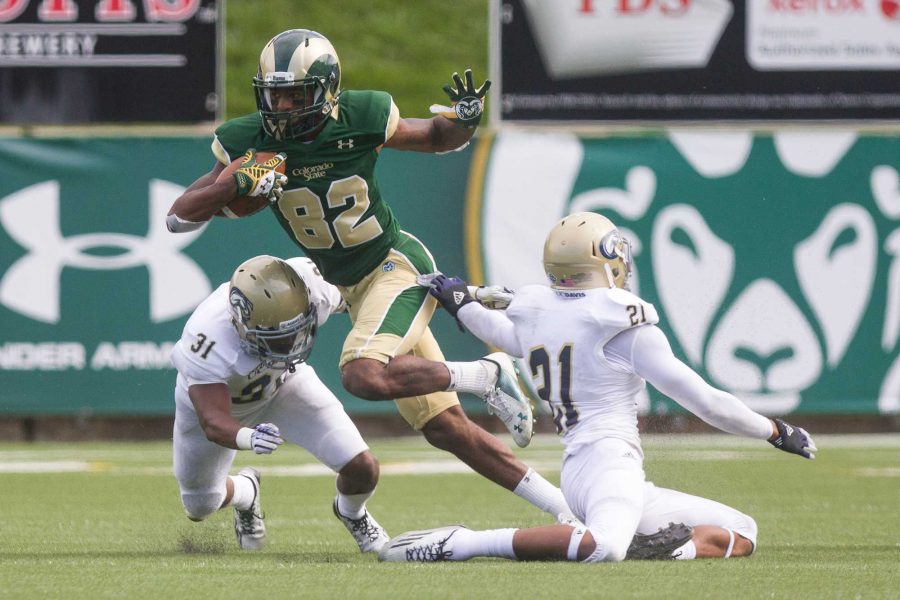 Colorado State quarterback Garrett Grayson had a career day while leading the Rams to a 49-21 win over the UC Davis Aggies in front of the 21,202 fans in attendance at Hughes Stadium Saturday afternoon in the team’s home opener.

“Like I’ve said many times, at the end of the day all that I care about is winning,” said Grayson. “I’m very happy with the way we came out and executed today. The receivers and me, I felt like we were pretty much on point with everything we were doing.”

One of those was sophomore receiver Rashard “Hollywood” Higgins, who lived up to his nickname as he broke tackles and sprinted past defenders to the tune of seven receptions for 147 yards and two touchdowns. In a game when several Rams receivers found success against the Aggies defense, Higgins fell just 10 yards short of beating his career single-game high of 156 set last year against Texas-El Paso.

“I was really excited about that performance,” CSU head coach Jim McElwain said. “We’re starting to get the ball in the hands of some explosive playmakers, and the offensive line had another great learning experience as we’re moving forward.”

The Rams defense that struggled against Boise State a week ago showed up to play against UC Davis, limiting them to 379 total yards of offense which mostly came in junk-time late in the game. The Aggies’ best receiver, Corey Galindo, finished with one reception for 13 yards, while their leading rusher, Colton Silveria, was held to under 100 yards. Aggies quarterback London Lacy was hurried and pressured all game, and the CSU defense held him to 200 yards on 21 of 34 attempts.

“Colorado State is a really good team,” said Lacy. “The level of intensity is really high when you play big teams like this. We just have to match the intensity.”

The Rams’ intensity was apparent early in the game. Just over four minutes into the first quarter, the Rams scored the first points of the game on a 45-yard pass from Grayson to receiver Charles Lovett.

The next two first-quarter Rams’ possessions both ended in touchdowns, with a 15-yard pass to Rashard Higgins with 7:47 left, and a 20-yard pass to Steven Walker with 3:57 left. Colorado State’s 21 first-quarter points were the most scored in an opening quarter since 2010, when the Rams put up 21 against New Mexico.

Up 21-7, the Rams opened the second quarter with a rare 33-yard field goal miss by Jared Roberts, but the Aggies wouldn’t be able to capitalize on the error. The UC Davis offense produced no points and only 63 yards of total offense in the second quarter.

With 4:16 left until halftime, Rams’ Rashard Higgins blew by his defender and caught a 52-yard pass from Garrett Grayson for a touchdown to give CSU a 28-7 lead going into halftime.

The third quarter was more of the same for the Aggies, who only managed to pick up 31 yards on 8 plays. The Rams defense continued to dominate the line of scrimmage, stuffing the UC Davis run game and slowing down their passing game, only allowing Aggies quarterback London Lacy to total 16 passing yards in the entire quarter

From there, Colorado State added two fourth-quarter touchdowns from junior running back Jasen Oden sandwiched between two UC-Davis touchdowns against CSU’s second-stringers to account for the final tally