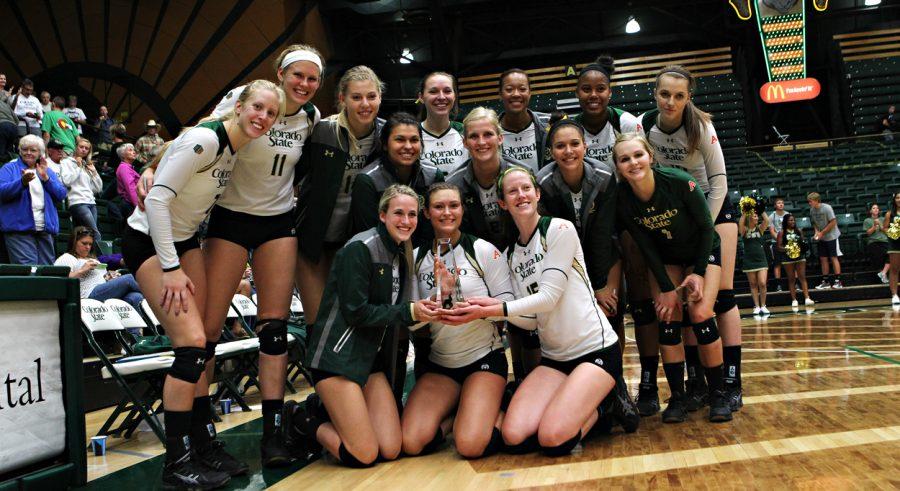 The Colorado State volleyball team celebrates its victory over Marquette in the championship match of the Rams Classic. Photo by: Dan Byers/CSU Athletics

With three consecutive sweeps in the first week of the 2014 season for the Colorado State volleyball team, the Rams wasted no time on regaining their momentum from last season. CSU defeated VCU and UC Santa Barbara Saturday and Marquette on Sunday afternoon to win the first-ever Rams Volleyball Classic title.

“This weekend showed that we can play with maturity against another team that plays with maturity and that we have the ability to disrupt teams with our defense, our serving and today (Sunday) with our blocking,” head coach Tom Hilbert said. “I am the glass half-empty guy so I see things that we will work on because I would like to have consistency in our outside hitting position…but we as a team are doing all the little things well.”

The Rams, who jumped to No. 13 in Monday’s AVCA Coaches’ Poll, came out of this weekend with a versatile offense as well as a strong defense that was able to make easy passes as well as digging hits from someone of the better offensive teams in the country.

With Jamie Colaizzi and Cassidy Denny in the back row for CSU it is going to be hard for opponents to get the kill especially if the Rams continue to block as well as they did this weekend.

“Playing defense with her (Colaizzi) you never had a doubt that she is going to make a play and she is just someone you have so much comfort with and she sees so much,” junior Adrianna Culbert said.

“Obviously more digs means more opportunities to kill the ball and point score so I think it is going to help our transition game,” senior middle blocker Kelsey Snider added.

With their toughest competition (Marquette) of the weekend coming in Sunday’s championship match, the Rams were able to scout the Golden Eagles as well as make adjustments to stop their best player, Big East Preseason Player of the Year Bailey Autumn. Along with their dominant defensive performance, the Rams spread the wealth offensively, hitting .310 for the weekend with six players totaling at least 12 kills.

“One of our keys was to be evenly distributed and it was very evenly distributed if you look at total attempts,” Hilbert said after Sunday’s match.” “The person with the most attempts was 20 and the least was 17 with the exception that Sanja (Cizmic) didn’t get in all that much.”

In its second appearance against Virginia Commonwealth in program history, CSU gained an early lead in each of the sets to push the Rams to a 25-18, 25-16, 25-12 sweep, notching its first victory of the year. Marlee Reynolds, one of three All-Mountain West preseason picks for the Rams had 13 kills on 27 attempts hitting .407. Reynolds lead the offense against VCU, though the true freshman Jasmine Hanna showed that she”ll be a force to be reckoned with by recording five kills in her first college match.

“She (Hanna) has been really impressing us in practice as of late and she did some nice things today,” Hilbert said. “We got to get a couple other people in there and we didn’t get enough balls to those guys but we are slowly figuring out who is going to play where and I thought it was a good way to start.”

Perennial Big West power UC Santa Barbara came into the second match of the night looking for revenge after the Rams defeated them in four sets last season in California. With 12 ties and five lead changes in the first set alone, CSU took control to sweep the Gauchos 25-23,25-18,25-16, earning its second win of the season in less than six hours.

Colorado State now looks toward this weekend where they will face Florida A&M on Friday before taking on fourth-ranked Wisconsin Saturday night in one of the most anticpated matchups in Colorado State volleyball history.