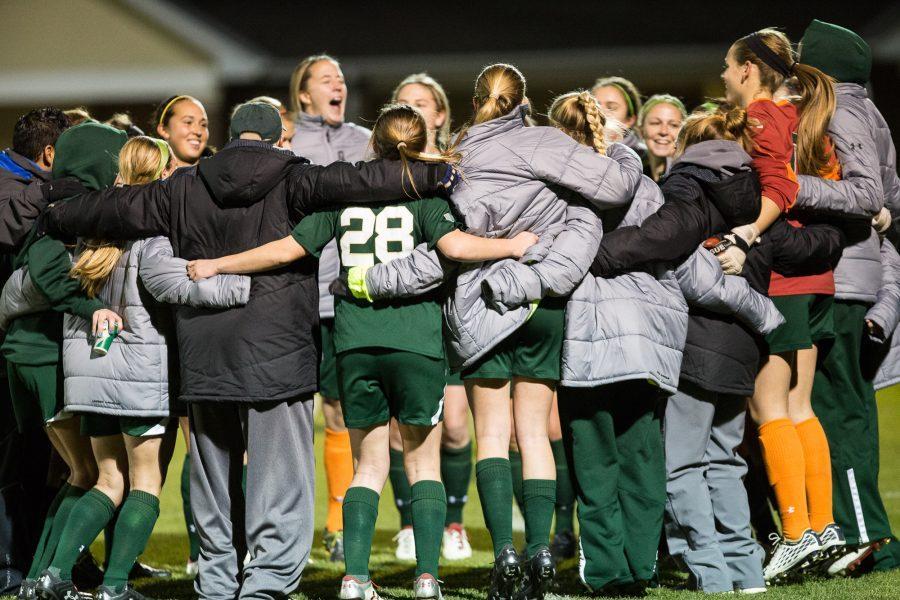 The sun shined not only gold, but black and gold over the Lagoon Field Sunday afternoon as the Iowa Hawkeyes’ women’s soccer team stormed over Colorado State for a 4-0 win, handing the Rams their third loss of the season.

The Rams early season struggles against top-flight soccer programs continued in the Iowa match despite veteran defender Megan Speed returning to start Sunday for the Rams after leaving Friday’s game against Portland State with an ankle injury. But after another strong start, the Rams’ defense couldn’t hold off Iowa’s talent for very long.

Standout forward Cloe Lacasse led the Hawkeyes over the Rams with two goals and one assist in Sunday’s match. Lacasse already had five goals through five games coming into Sunday’s match, and continued her early season tear against the Rams, bringing her season point total up to an incredible mark of 17. Lacasse has led Iowa in points every year since she entered the program as a freshman.

Junior defender Catherine Ruder saved a goal early in the first half with a perfect rotation to cover CSU goalkeeper Jesse McGinley, but just minutes later Lacasse dribbled past Speed for a one-on-one shot against McGinley from the right side and put the ball past her for an early 1-0 Hawkeye lead.

Just two minutes later, Lacasse notched her assist with a pass up from midfield to Madeline Crowdy, who gave Iowa a 2-0 lead in the 27th minute.

CSU head coach Bill Hempen took some of the blame on allowing Lacasse those opportunities.

“We didn’t coach them well enough to know how to defend that kind of player,” Hempen said. “When she was isolated with one of our players, we weren’t quick enough to support the pressure defender, which allowed a one-on-one followed by another one-on-one instead of a one-on-two.”

“It’s hard to replicate that in practice, so the only thing we can take from this is realize what’s out there for the next step,” Hemped said of the Hawkeyes level of skill.

The first half closed with the Rams defense finally finding its footing but Speed did have to come out to rest. She did not start the second half either, asHempen substituted freshman Taylor Hodgson. Senior goalkeeper Maggie Sherman also started the second half, replacing McGinley for the remainder of the game.

“It’s always good when you can get players into a situation like this. You want them to certainly get the experience against a top team like Iowa,” Hempen said as a positive note for the Rams.

However, the Hawkeyes did not take long to put the game out of reach in the second half, as Crowdy returned the favor with an assist to Lacasse who converted another one-on-one opportunity in the half’s opening minutes to put the Hawkeyes up 3-0.

Speed returned to play minutes in the middle of the second half, but to no avail as the Rams couldn’t stop Hawkeye senior Melanie Pickert from sealing the deal with a fourth Iowa goal off of a corner kick from Corey Burns.

The Hawkeyes’ 23 shots is the second-most by a CSU opponent in Rams soccer history, with their 14 shots on goal being the most ever by a Rams opponent.

“For most of the game, we are organized (in the back), but as it goes on we make little mental mistakes as we get tired. We just need to fix those in practice,” Hodgson said. “We’re gonna go in and watch film and see where we’re breaking down in the final third and what our mistakes are and when we’re stepping wrong. Obviously, we can learn from it and just get better for next game.”

“We were taken to school today by the Big 10,” admitted Hempen. “I’m just hoping we can come back and compete next weekend.”

Colorado State’s next match will be against the Southern Methodist University Mustangs Friday at 4 p.m. at home on the Lagoon.