No. 7 CSU volleyball team opens conference play with big target on its back 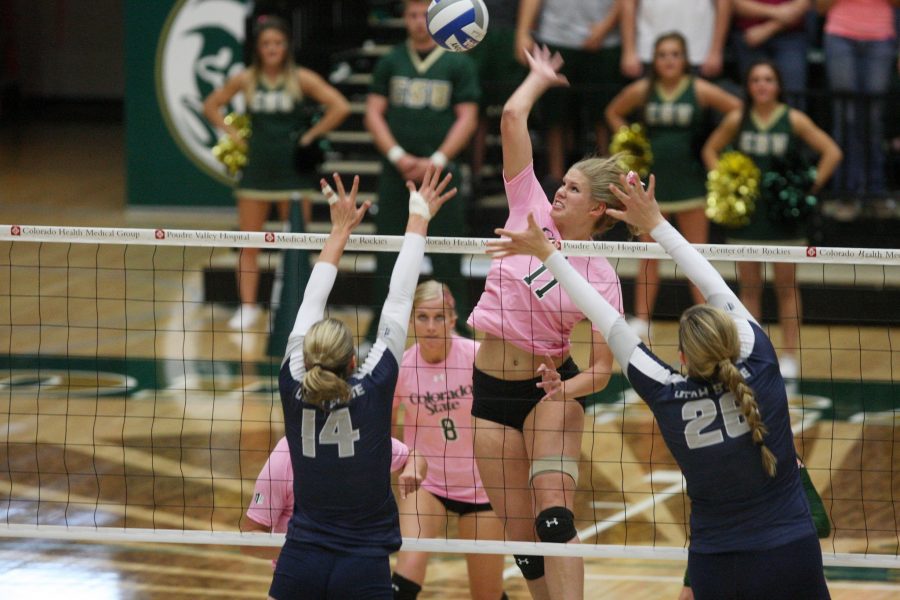 Middle blocker Acacia Andrews (11) winds up for a kill during the Rams win over Utah State last season at Moby. CSU opens conference play against the Aggies on Thursday.

With a sixth-consecutive Mountain West tile at stake for the No.7 Colorado State volleyball team, the target on its backs could not be bigger.

“Everyone is going to come out and play their best every time that we step on the court and so we just have to be prepared for that and know that going in,” junior outside hitter Adrianna Culbert said. “Even if a team isn’t necessarily as good as us they can still beat us if we don’t come out and perform.”

The Rams kick off conference play Thursday against a seasoned Utah State team and Boise State on Saturday. Last season CSU overcame a 0-2 deficit against Utah State on the road, though this season head coach Tom Hilbert believes the Aggies have the whole package.

“I think Utah State is a very good blocking team and Boise State is fast offensively, they are really good as an offensive team,” Hilbert said. “Utah State is the whole package in my opinion and I really like the way they block, they are very thorough about it and it is very difficult to find a weakness in what they do.”

With two games against conference foes each season, teams will likely know all of the Rams’ tricks before the first set even happens. Luckily for CSU, Hilbert hopes to have a couple tricks up his sleeve heading into this weekend.

“I would like to keep teams guessing, that to me is the biggest thing,” Hilbert said. “Just being able to do a lot of different things and have (setter) Deedra (Foss) be kind of unpredictable in which choices that she makes.”

Even with several surprises expected from this weekend’s opponents, the Rams continue to look for improvement. Hilbert mentioned after Tuesday’s practice that he was disappointed in the way his team served and passed during the Residence Inn Invitational in Tempe, Ariz. and that they would like to have more of an offensive balance.

“I think we have a lot of areas where we can improve on,” Culbert added. “We are definitely working on blocking and trying to improve that and just making sure our serve receive and defense continues to improve. Just because we have really good stats doesn’t mean we cant make it better.”

So far this season CSU has continued to be a comeback team, especially with multiple point runs late into the set. The Rams depth off the bench will help keep its opponents on their toes as CSU looks continue to be a team everyone in the conference wants to upset.