No. 4 Wisconsin sweeps No. 13 CSU in front of record-breaking crowd 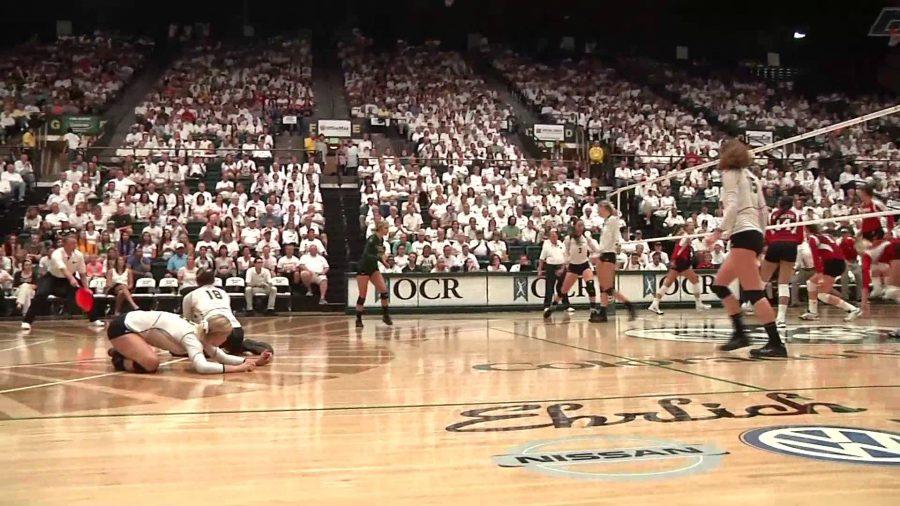 The No. 13 Colorado State volleyball team found out what big-time college volleyball is like Saturday night at Moby Arena. Despite having a school-record 7,018 fans behind them, the Rams fell to No. 4 Wisconsin 25-21, 25-23, 25-20. Colorado State drops to 5-1 on the year while the Badgers, last year’s NCAA national runner-up, improve to 6-0.

“We took some risks blocking and I thought we took good risks blocking,” Hilbert said. “I thought that we left their outside hitters alone a couple of times and we are able to dig them one on one.. But as the match wore on we weren’t able to get any more blocks. Three blocks and one service ace, we needed a lot more than that to beat this team. And I credit them (Wisconsin), they are very good.

Colorado State started off slowly in the first set, allowing the Badgers offense to have easy looks early on. But with a couple of pivotal kills from outside hitters Marlee Reynolds and Jasmine Hanna as well as middle blocker Kelsey Snider, the Rams held their own until the Badgers pulled away late in the set.

“What I said to my team at the end of the match was that these are sets we could have won,” Hilbert said during the postgame press conference. “And certainly one or two point swings somewhere could have done it. Certainly in set two, but it didn’t. They were too good and we need to learn from it and we have got to get better.”

Saturdays loss for CSU does not decide the potential of the 2014 season rather than prepare it for what it could be. Last season the Rams went into the NCAA Tournament without playing top caliber teams, that changes this year.

“Now what do we have to do, we have got to block some balls, we have to serve some aces and we needed to disrupt them a little bit more than we did,” Hilbert said. “So I am walking away from this going I think we played okay, we are just simply not as good as Wisconsin.”

Despite the disappointing result, Hilbert was excited about the turnout of the more than 7,000 fans decked out in white for the Rams “White Out” promotional night.

“It makes me extremely proud to be a coach at this place and when we have that kind of a turn out, it helps us,” Hilbert said. “I think both teams walk away from this with some positives.”