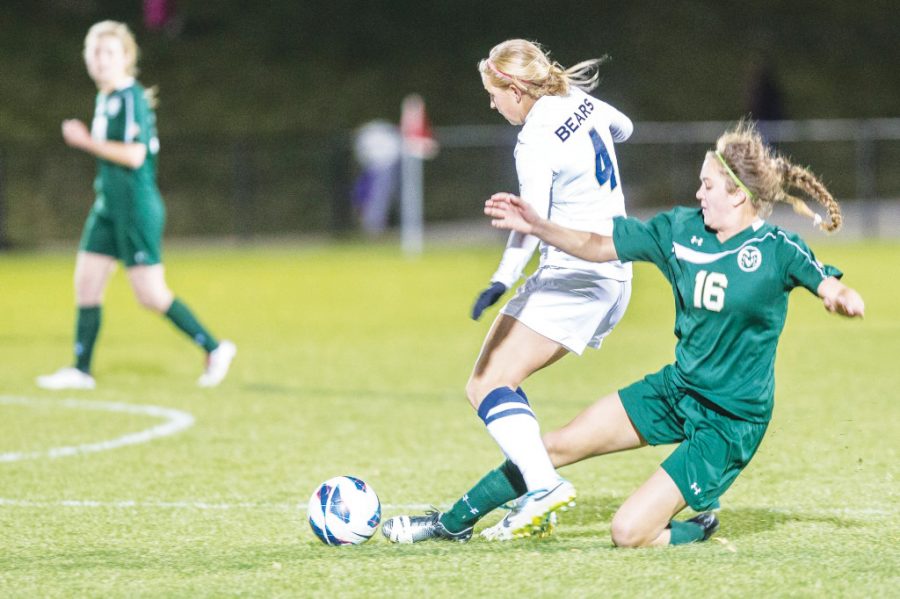 Colorado State midfielder Jessica Jochheim slides in for a tackle during last season's game against rival Northern Colorado. The Rams will host the bears for a rematch on Thursday. (Photo credit: Eliot Foust)

Colorado State women’s soccer kicked off its second-ever season last weekend with a loss to CU-Boulder in a Colorado Cup match, but the team is looking forward to initiating a winning tradition for Rams soccer.

The Rams struggled in 2013 as a first-year program with an inexperienced team made up of mostly non-scholarship athletes. The team posted a 2-13-3 record, going 1-9 in the Mountain West.

Players and coaches are focused on climbing from that mark this year. Head Coach Bill Hempen is no stranger to quickly turning programs around. In 2001, he was hired as CU’s head coach, where he posted a 3-11-1 record in his first year, only to come back in 2002 with a much improved 10-8-2 record before winning the Big 12 in the regular season in 2003.

Coach Hempen is hoping for a similar bounce back this season. “The level of players we have is much higher than we had a year ago,” Hempen said. “But, it’s still hard to say if we’re ready for a turnaround like that.”

Before coaching at CU and CSU, Coach Hempen held the head coaching job at Duke for 13 years, where he coached seven All-Americans and led teams to eight NCAA tournament berths in his last nine seasons.

CSU goalkeeper Jesse McGinley, a transfer from UNC-Greensboro, is confident about the Rams’ talent this year.

“A lot of us have transferred from schools that have had established programs and know what it takes to win, so we’re bringing that to the table this year,” said McGinley, a redshirt sophomore who will be eligible this year after sitting out the 2013 season due to NCAA transfer rules.

Fort Collins native Megan Speed will be helping McGinley protect the net on defense, as she is returning for her junior campaign following a solid sophomore season in which she started all 18 games and was one of just two players to play every minute. Joining them on defense is senior Catherine Ruder, who started 17 games last year after transferring from San Jose State in 2012.

With that experience in the back, Coach Hempen emphasized the main focus of improvement will be on the attacking end of the field.

“We have to be a bit more dangerous,” Hempen said. “If we’re not dangerous, we lose respect of the other team, and they’ll keep defending higher and higher up.”

Offense was hard to come by for the Rams last year, as CSU scored just two goals on 40 shots, 22 of which were on goal, compared to opponents’ 22 goals on 141 attempts with 69 being on goal.

Hempen would like to see his attack control the ball longer, to gain more scoring opportunities and to limit those of the opponent.

“The objective of our front runners is to at least hold the ball long enough to give our defenders a rest, as well as attacking,” Hempen said. “We’re trying to give the offense new ideas everyday and expand their thought process when it comes to attacking.”

Last weekend, CSU put up a solid effort defensively in the season opener against a more aggressive CU team, holding the Buffs scoreless until the 75th minute.

“We had the ball long enough to take shots, we just have to take them,” said Hempen of his team’s offensive effort.

According to Ruder, stops on defense will start to translate to goals on offense.

“We need to start building from the back more, and as the forwards start to figure it out, they’ll be going down field more and more,” Ruder said.

“Even defenders can be more aggressive,” Ruder added.

Last year, she was third on the team in shots and shots on goal, despite playing the defensive end.

“I’m hoping I keep getting forward,” Ruder said. “That’s my favorite part of the game.”

The Rams’ next opportunity to start their turnaround season is 4 p.m. Thursday at home in a match against Northern Colorado, which will count towards the Colorado Cup competition.

“(Colorado Cup) means a lot because we get to play against girls we grew up playing against,” said Megan Speed, who transferred back to her hometown of Fort Collins almost immediately upon the formation of CSU’s soccer program. “Growing up (in Fort Collins), you always want to be a Ram,” she added.

The match with the Bears will provide CSU with a chance to capture the first win of the season as well as the program’s first-ever home victory. After Thursday, Portland State comes to Fort Collins Sept. 5 followed by Iowa Sept. 7. The Rams will be playing their home matches on campus at The Lagoon east of the Rec Center.