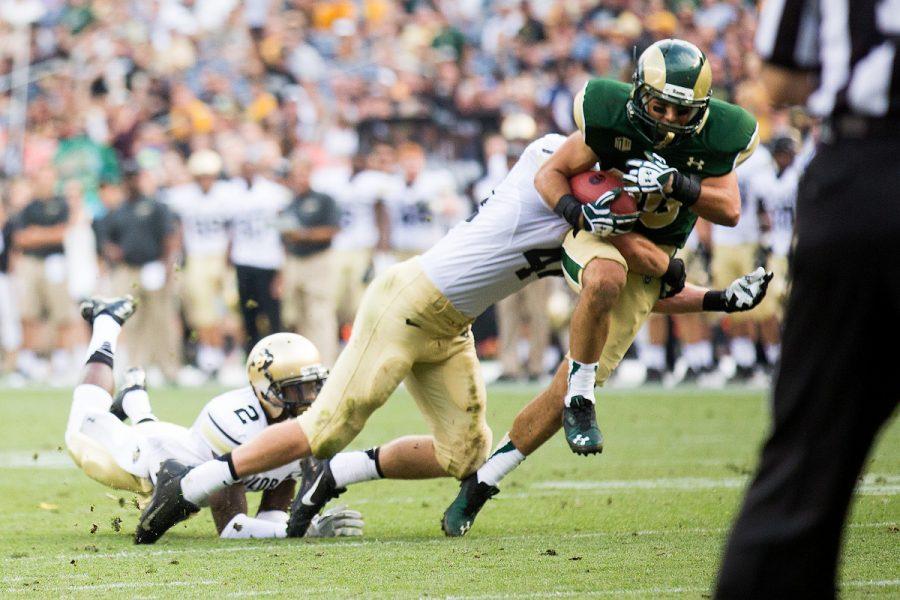 Friday at 7 p.m, Colorado State takes on the University of Colorado at Sports Authority Field at Mile High for the Rocky Mountain Showdown. Here are a few key matchups to keep tabs on during the game:

They say that games are won and lost in the trenches, where the offensive and defensive lines collide, so this matchup could easily decide whether or not the Rams offense will have any success moving the ball against Colorado. It will be important for both units to get a good start to the season, but it will certainly be interesting to see how well both of these young groups respond to what will be, for many of them, their very first game day start in college.

The stout offensive line a year ago that aided running back Kapri Bibbs to 31 rushing touchdowns and quarterback Garrett Grayson to throw for nearly 3,700 yards has gone through a complete transformation. After losing center Weston Richburg to the NFL, as well as four other decorated offensive linemen in the offseason, many of the second-team players have had to step up.

Redshirt freshman Jake Bennett has stepped into the center position left empty by Richburg and redshirt sophomore Fred Zerblis has been commanding the right guard position. With senior right tackle Mason Hathaway out with an injury, left tackle Ty Sambrailo and left guard Mason Myers are the only seniors left on the starting offensive line.

In last year’s Rocky Mountain Showdown, CU receivers caught 33 passes for 400 yards and three touchdowns against the Rams, but CSU can expect a less potent air attack from the Buffaloes this time around.  Despite looking great against the Rams, the CU passing game finished a lowly eighth in the Pac-12 in total yards last year, and most of that was due to veteran wide receiver Paul Richardson who the Buffaloes lost in the offseason.

Richardson scored two deep touchdowns against the Rams in the showdown last season and was voted the Buffaloes team MVP as well as earning first team All-Pac 12 honors. His 83 receptions and 1,343 yards led all Buffalo receivers, and he left Colorado as one of the best receivers in school history. Richardson was drafted 45th overall in the 2014 NFL draft by the Seattle Seahawks.

To replace Richardson’s play-making ability, CU plans to spread the ball out to more receivers and utilize more depth at the position, which is good and bad for the Rams defensive backs. It’s good because there is a lack of experience on the Colorado roster that’s made up of six freshmen, a sophomore, and three upper-classmen, but dangerous because the younger Buffs receivers’ speed cannot be underestimated.

The CSU defensive backs are relatively experienced when compared to Colorado receivers, and their height and length match up favorably. Both starting cornerbacks, senior Bernard Blake and junior DeAndre Elliot, are 6 feet and 6 feet 1 inch respectively, strong safety junior Kevin Pierre-Louis is also 6 feet 1 inch, and free safety Trent Matthews stands at an impressive 6 feet 3 inches. CU freshmen Shay Fields and Lee Walker have impressed coaches with their speed, as well as sophomore letterman Devin Ross and the reliable Nelson Spruce. If the Rams want to avoid giving Colorado a slew of passing yards, then it is critical that the defensive secondary shows up ready to contend with speedy and explosive Colorado receivers.

Rams QB Garrett Grayson will be entering his third Rocky Mountain Showdown coming off of a record-setting high from last season. His 3,696 passing yards last season was a school record, and his 297 completions ranked him 14th in the NCAA FBS and second-most in school history. While Grayson had a mediocre performance in his last Rocky Mountain Showdown (22-39, 201 yards), we can expect that the 13 additional games he played last season provided him with bountiful experience he’ll be able to call upon this time around.

Also, it surely helps that this season there is absolutely no question or doubt about whom the team’s leader is. Last season, CSU head coach Jim McElwain waited until game time to announce Grayson would be starting in the Showdown. This year, Grayson is already tabbed to be the starting quarterback and a leader of the Rams football team, so there’s not going to be any last-minute decisions or any gray-area about who’s playing under center.

Where Grayson can be considered the more experienced quarterback of the two, Colorado sophomore Sefo Liafau is surely the wild card. Liafau played in eight games last year and only won two of them, but his upside and potential are continuing to impress CU coaches. Standing at 6 feet 4 inches, 230 pounds, Liafau has the size that the Buffaloes are looking for, and all accounts point to Liafau being a much smarter quarterback than he was a year ago. The game is starting to slow down for him, meaning he’s seeing defensive schemes more clearly and is able to make more adjustments. But the major difference between the inexperienced Liafau and the more composed Liafau this year is not simply being more acquainted with the playbook, coaches have had him adjust his “platform.”

Buffs coaches chose not to harp on Liafau last season for his odd mechanical issues, like his stance and his release point, but now that the young quarterback has gotten some first-season jitters out of the way, his coaches feel more comfortable altering a few things about his throwing style like his stance and weight distribution.  This all culminates into a quarterback that can make up for his lack of experience with his physical play-making ability, paired with his growing knowledge and familiarity with the CU offense.