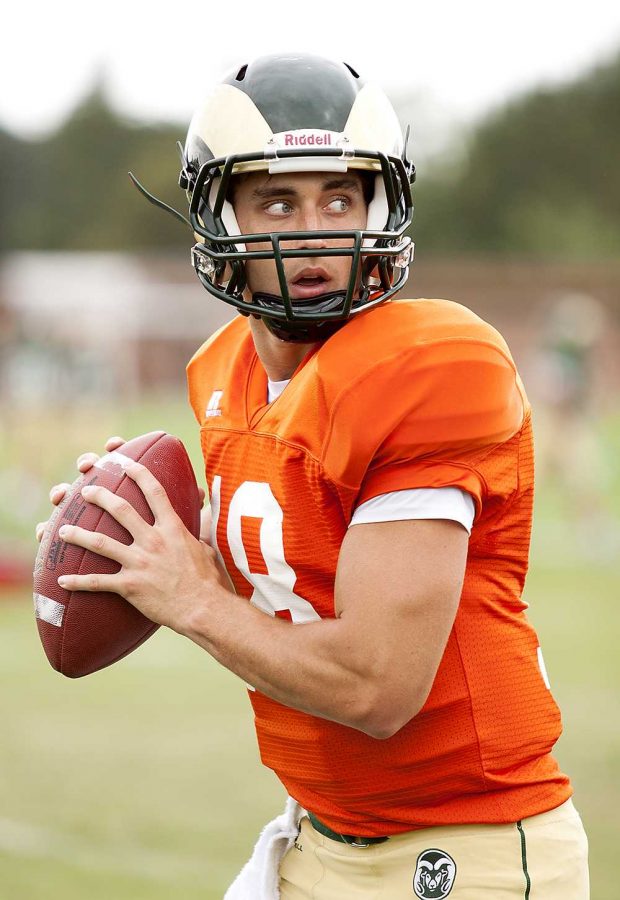 Starting quarterback Garrett Grayson gets loose during warmups on Tuesday Aug. 14. Grayson and the Rams have focused on fixing the little mistakes over the course of fall camp.

Peyton Manning does not invite comparisons. The guaranteed first-ballot Hall-of-Famer is in a league of his own. None perhaps, are more aware of that fact than Colorado State quarterback Garrett Grayson.

When Grayson takes the field for Friday night’s season debut against rival Colorado, his number 18 jersey will gleam under the lights of Sports Authority Field at Mile High one final time.  Many don’t know that Grayson’s choice in jersey number was deliberate and has been since high school, before Manning exchanged the powder-blue Colts horseshoe for Broncos orange.

When Grayson first mentioned that he wore his jersey in honor of his favorite quarterback, it was exactly a year ago. The Rocky Mountain Showdown loomed, but Grayson still jockeyed for the starting position with Connor Smith and freshman Nick Stevens.

Now, just a year later, the senior from Vancouver, Washington doesn’t recognize the wide-eyed version of his former self running around for his life during last year’s 41-27 loss to rival Colorado. Still a humble hard-worker, Grayson’s green eyes now glow with a new confidence as he stands a bit taller. While his performance during the 2013 season would be enough to make anybody proud, he says Manning is responsible for the extra boost.

“That’s something Peyton taught me,” Grayson said of his time at the Manning Passing Academy this summer. “Be the most confident man in the room. Don’t be cocky, but (your teammates) should look at you and know that 100 percent of the time, you know exactly what you are doing.”

Manning and Grayson have more in common than the weekend shared together in Louisiana or the number on their jersey.

Manning defied all critics last season, breaking nearly every offensive record in the book after a serious neck surgery – at the age of 37, no less. This year, he carries the weight of that achievement and a fresh season of expectations.

Grayson broke records of his own in 2013 and is on-pace to be one of the best passers in Colorado State football lore. While no one is trying to compare Grayson to the likes of Manning in terms of talent – their situations are similar: regular guys with their own big shoes to fill.

But Grayson isn’t looking at it that way.

“I think, and I’m sure he’d tell you the same thing, if we just win football games, we’ll both be happy – that’s what it comes down to,” Grayson said. “I don’t care if I throw for a hundred yards a game and we go 12-0, that’ll be fine with me. As long as we are winning, I’ll be happy. “

Head coach Jim McElwain has the same viewpoint. As a former college quarterback and Alabama offensive coordinator and quarterbacks coach, the third-year coach has a special connection with the man under center. He understands the glory and the blame that come with the job.

“Look, this game is not going to be won or lost by Garrett Grayson,” McElwain said. “This offseason, he has been able to perfect his craft and if he goes out and does his job, we have a chance. But by no means is everything resting on this guy’s shoulders.”

For Grayson, Friday is about redemption and proving himself, but it’s more about being what his team needs him to be: a leader. Over the past year Grayson has grown into the dependable backbone every team wants to rally behind.

“Him being a guy who has played a lot of games and has seen live fire has helped me out a lot – he knows the situations,” redshirt freshman center Jake Bennett said of Grayson’s leadership. “It just takes on more meaning now.”

If that sounds like another Colorado quarterback who wears number 18, Grayson isn’t concerning himself with it, or with outside expectations.

“The first two games, we lost to both of them last year, and it’s something we all have in the back of our minds – we want to beat those guys,” Grayson said. “We don’t want to let what happened last year happen again.”

With a bevy of offensive weapons Grayson has a chance to carve up opposing defenses, and he’s got the Buffs at the top of his list.

Collegian Sports Reporter Micky Rastrelli can be reached at sports@collegian.com and on Twitter @c_rasta5.