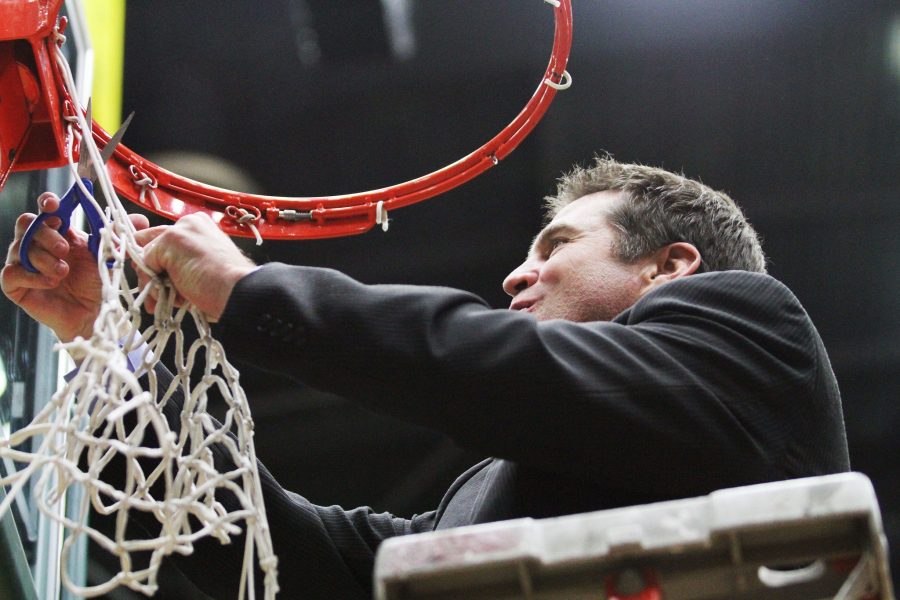 CSU Women's Basketball Head Coach Ryun Williams cuts down the rest of the net at Moby after the Ram win against UNLV Wednesday night. The CSU win and Boise State loss clinches the regular season Mountain West conference title for the Rams.

The Colorado State women’s basketball roster is now complete for the 2014-2015 season.

Head coach Ryun Williams announced the addition of Veronika Mirkovic on Wednesday. The 6’1″ forward joins the Rams from Sweden where she played for the U-20 and U016 Swedish national teams. She has the ability to provide a presence in the paint for the already high-powered CSU offense.

“Veronika will help improve our depth at the post and forward positions,” Willams said. “Her overall skill and intelligence will fit nicely with our group.”

Mirkovic spent the last two seasons playing for the Sanda Wildcats Huskvarna team in Sweden. She led the team in points and rebounds both seasons. In 2013-2014 she averaged 15.7 points, 8.8 rebounds and 2.9 assists per game. She recorded 15 double-doubles and scored in double figures on 33 occasions in her time with the Wildcats.

Mirkovic is one of the many new faces on the Rams’ roster going into the season. She joins fellow signees Keyora Wharry, Hannah Tvrdy, Jamie Patrick, Mayanne Hamm, Taylor Ely and Alana Arias as new additions to the team.

The Rams are coming off of a 25 wins season, which is tied for third best in school history. CSU women’s basketball begins their season on November 14 in Fort Collins when they take on Hawai’i.

Collegian Sports Reporter Emmett McCarthy can be reached at sports@collegian.com and on Twitter @EmmettCollegian.