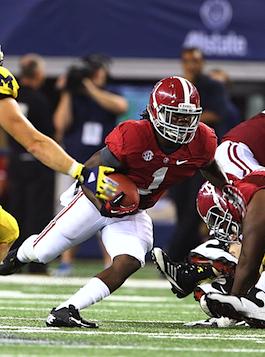 Former Alabama running back Dee Hart (1) has confirmed to the Orlando Sentinel that he will be transferring to Colorado State next season. After graduating in May, Hart will be immediately eligible for the 2014-15 campaign. (Courtesy: CBS Sports)

No Kapri Bibbs? No Donnell Alexander? It might be no problem.

Despite losing the star sophomore to the NFL this past spring and his senior counterpart to a transfer, the Colorado State football team may have found the answer to its backfield issues Wednesday afternoon. According to the Orlando Sentinel, former Alabama running back Dee Hart has landed with the Rams after graduating from Alabama this spring. In a text to the Sentinel, Hart confirmed that he was heading to CSU and was “about to leave Orlando.”

In three seasons with the Crimson Tide, Hart carried the ball 43 times for 166 yards and one touchdown. Hart’s promising career was marred by injuries and a logjam in the Alabama backfield. The former Parade High School All-American, listed as the nation’s top all-purpose back in 2011, tore his ACL the summer before his freshman year in Tuscaloosa and was forced to redshirt during the Crimson Tide’s first of two consecutive national championships. Then after a promising start to his redshirt freshman season that included rushing for 88 yards in five games, Hart again injured his knee, bringing his season to an end once again.

Along with two devastating knee injuries, Hart’s promising start was also derailed by the depth in the Alabama backfield. In his three seasons with the Tide, Hart was joined in the backfield by the likes of current Green Bay Packers running back Eddie Lacy, current starter TJ Yeldon, and a host of other prep stars with similar pedigrees.

However, Hart’s tale took a darker twist this past February when he was arrested for marijuana possession and allegedly tried to dump the bag into the arresting officer’s car while giving the officer a false name. Hart was released on $1,300 bond and in a statement by the University it was announced that he hadn’t been with the program since Alabama’s Sugar Bowl loss to Oklahoma in early January.

Now enter Colorado State. While it is not known how strong the connection between the two is, current Ram head coach Jim McElwain was the offensive coordinator for the Tide in 2011 while they were recruiting Hart. Freshman slot receiver Deionte Gaines is also a former teammate of Hart’s at Dr. Phillips High School in Orlando.

According to a source close to the situation, Hart will be eligible to play immediately due to the NCAA’s graduate transfer rule and will provide depth along with converted safety Jasen Oden, redshirt freshman Bryce Peters and newcomers Deron Thompson and Jonathon Lewis.

Colorado State officials were unavailable for comment at this time.