The Rocky Mountain Collegian • May 5, 2014 • https://collegian.com/articles/sports/2014/05/riley-hughes-pitches-csu-baseball-to-border-war-domination/ 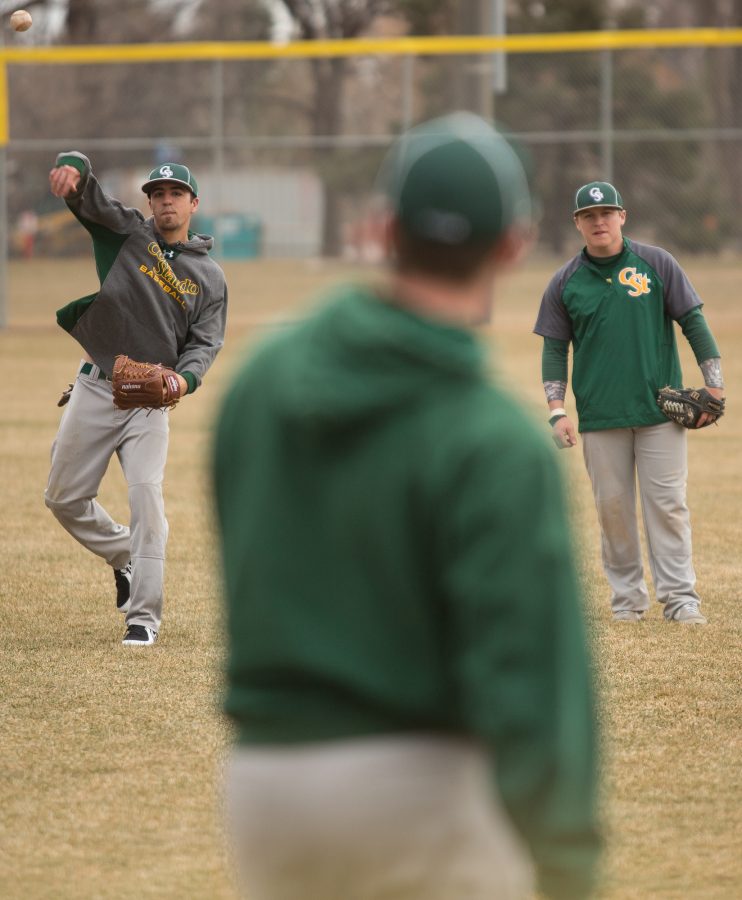 Right fielder Jake Hoffman, left, and third baseman Mike Medina warm up at practice yesterday afternoon. The Rams have 5 games over the next 3 days against the University of Nebraska and Adams State University.

Riley Hughes has a lot to be smiling to do this weekend. He pitched a full seven innings Friday night and allowed just a single hit, leading the Rams to a 11-1 victory over the University of Wyoming.

A win in their final regular season game puts them in very good position to receive an at-large bid to the Mid-America Regional Tournament, the first step in the Rams’ journey to nationals.

“It being the last game I will ever play at City Park, and being able to go in and allow just one hit — I’ll remember that for the rest of my life,” Hughes said. “My hitters showed up, they hit five runs in the first inning, so from a pitching standpoint, it takes a lot of the stress off. You can throw more freely because you have a lot of support.”

The Rams posted 12 hits from eight different batters — 10 brought runners home — and Brett Bogner hit a solo bomb to give CSU their 11 total runs. Greg Hart, Matt Smith and Zach Gehler all had two or more hits and at least one run.

On the other side, Wyoming remained frustrated at bat, succumbing to Hughes’ pitching finesse. He struck-out six and walked two, impressing former CSU pitcher and current head coach Nick Childs.

“He’s had some great games in his career. But with being injured at the beginning of the season, he is just now getting back to his full-strength. That was the awesome part, for him as a senior to come out on senior night and pitch like that,” Childs said. “It was seven innings of dominance.”

Still, the team has been waiting with bated breath to find out if they received the regional bid. Childs says the should get the news Sunday night or Monday morning, and he is confident it will be positive.

Despite the rough weekend against UNC, the Rams have looked strong all season, and closing out the year with a route of the Border War rivals should give them an added boost.

Smith, the freshman who went 3-4 with 3 runs and an RBI is hoping for an extended season with the current seniors.

“It was definitely emotional, and I’m really glad we got the big win for them in their last game,” Smith said. “That would be great in my first year if we go to regionals, we have all been looking forward to it all season. And hopefully from there the World Series — that’s our goal.”