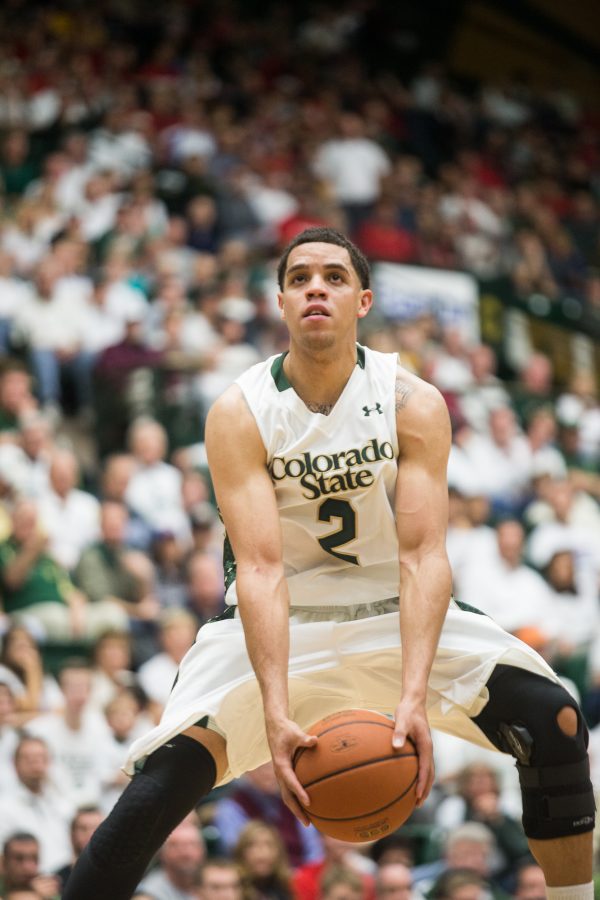 Despite the fact that the 2013-14 college basketball season ended  just over a week and the 2014-15 regular season won’t begin for almost seven months, there’s never a bad time to look ahead to next year. With that being said, Collegian basketball reporter Keegan Pope gives his Way Too Early Predictions for the 2014-15 Mountain West conference season.

Note: Predictions are subject to change due to new commitments and/or transfers to and from schools.

Besides New Mexico and probably Nevada, no other team faces as big of a loss as the Aztecs do due to the graduation of conference Player of the Year Xavier Thames and Newcomer of the Year Josh Davis. But don’t expect to see a huge drop-off from this team with starters Dwayne Polee II, Skylar Spencer, and Winston Shepard returning. Look for key reserve Aqeel Quinn to compete with freshman Kevin Zabo for Thames’ point guard spot and blue-chip recruit Angelo Choi to provide a big presence in the middle alongside Spencer.

Along with Choi, the Azetcs brought in a top-flight recruiting class headlined by ESPN100 recruits Malik Pope, Trey Kell, and Zylan Cheatem. Both Pope and Cheatem fit into similar stretch “3” mold of Polee and Shepard and will likely provide solid depth behind SDSU’s two leading scorers returning from a season ago. That coupled with the coaching of legendary coach Steve Fisher puts the Aztecs in the driver seat for a second-consecutive Mountain West regular-season title.

Very rarely do you see a team who finished in the bottom third of a conference contend for the regular season championship the next year. But it is just as rare to see a collection of incoming talent like the Rams have. Despite losing starting center Gerson Santo to graduation and reserves David Cohn and Marcus Holt to transfers, the Rams are loaded at almost every position. Colorado State has three legitimate conference player of the year candidates in forwards JJ Avila and Stanton Kidd as well as guard/forward Daniel Bejarano.

After having almost no depth off the bench last season, head coach Larry Eustachy will have a bevy of capable players at the 1-4 spots. Expect Avila and Kidd, as well as Louisville transfer Chane Behanan and Southern Illinois transfer Dantiel Daniels to fill the forward spots with JuCo transfer Daniel Mulamba providing a strong presence on the glass.

With the transfer of guard Dwight Smith, CSU is reportedly looking to add a graduate transfer at the guard position to compete with incumbents Jon Octeus, Daniel Bejarano, Joe De Ciman, and Carlton Hurst along with incoming scorers John Gillon (Arkansas-Little Rock), Gian Luis Clavell (Northwest (KS) Tech) and Jeremiah Paige (Rangeview HS). The Rams’ only real hole is at the “5” position, but with the way Eustachy’s teams rebound from all over the court, a true center becomes expendable.

Likely the most talented, and most perplexing program over the past five seasons has been UNLV. Despite fantastic recruiting classes brought in each year by head coach Dave Rice, the Rebels can go from incredibly entertaining to utterly heart-breaking and back in the span of a few minutes. Rice has more than likely compiled his best class yet, but will have to overcome the transfer of guard Bryce Dejean-Jones, and the departure (and possible departure) of forwards Roscoe Smith and Khem Birch to the NBA Draft.

The loss of Smith along with Birch’s possible departure leaves a Vegas hotel-sized hole in the interior for the Rebels. However, Rice will be able to fill that void with two elite prep prospects in Goodluck Okonoboh (yes, Goodluck is his first name), and Dwayne Morgan, who are both ranked in the top-10 nationally at their positions. But the truly impressive part of this class is at the guard spots where San Francisco transfer Cody Doolin and McDonald’s All-American Rashad Vaughn will provide scoring ability that UNLV lacked mightily last season. If, and it is a big if, Rice can convince Birch to stay and get this team to co-exist on the court, the Rebels have a legitimate shot to dethrone San Diego State.

Sure, the Bulldogs lose do-everything guard Tyler Johnson (15.9 ppg, 7.3 rpg), but they also return one of the better backcourts in the conference with junior Cezar Guerrero, sophomore Marvelle Harris, and freshman Paul Watson. Their biggest downfall will be the lack of a dominant low-post presence but returners Alex Davis and Tanner Giddings are serviceable big men who provide a nice shot-blocking duo down low.

Along with the trio of Guerrero, Harris, and Watson, the Bulldogs added University of Texas transfer Julien Lewis and swingman Isaiah Bailey, providing immediate depth for a team without much last year. If Davis and Giddings, along with Karachi Edo, develop on the offensive end this could be a very scary team come league play.

It’s likely that the Sporting News won’t pick the Broncos as their preseason favorite this year, but this team is really one player away from contending in the top third of the conference. Both Anthony Drmic and Derrick Marks return along with key reserves Igor Hadziomerovic and Nick Duncan. But the loss of double-double machine Ryan Watkins and sharpshooters Jeff Elorriaga and Thomas Bropleh will put a huge part of the Broncos’ offense on Drmic and Marks.

The addition of forward David Wacker provides some depth in the frontcourt, but beyond that there isn’t much inside for the Broncos. Marks and Drmic will keep Boise close in a lot of games with their scoring ability, but that can only go so far if they can’t compete on the offensive and defensive glass.

Remember the big loss I mentioned earlier? Well that is exactly what the Lobos are facing with the graduation of 2013 MW Player of the Year Kendall Williams, 2014 MW Tournament MVP Cameron Bairstow, and standout forward Alex Kirk. That blow will be softened a bit by the return of veteran point guard Hugh Greenwood and slashing guard/forward Deshawn Delaney. However, the Lobos didn’t bring in an elite recruiting class and don’t return much in the way of players with significant minutes under their belts.

The loss of Bairstow and Williams was obviously expected, but the departure of Kirk dropped the Lobos from a top-4 team in the MW to the middle of the pack. The Lobos lose more than 60 percent of their offensive production and will have to rely on Greenwood, Delaney, Cullen Neal, and Merv Lindsay to pick up that slack. Because of their home atmosphere, UNM will likely compete with anyone down in Albuquerque but will struggle mightily on the road.

Assuming that standout forward Larry Nance Jr. recovers fully from the torn anterior cruciate ligament he suffered late this past season, the Cowboys are a possible sleeper team when conference play begins. The loss of seniors Nathan Sobey and Jerron Granberry will hurt, but the sudden rise of junior guard Josh Adams and poised play of senior Riley Grabau, along with Player of the Year candidate Nance makes Wyoming a very dangerous team.

Along with Grabau, Adams, and Nance, the Cowboys return some solid contributors with defensive standout Derek Cooke Jr., and guards Charles Hankerson and Trey Washington III. If Wyoming can get quality minutes from redshirt Jason McManamen and/or prep recruits Diontae Jones and Jeremy Leiberman, the Cowboys should give teams like New Mexico, Boise State, and Fresno State a run for their money.

There have been rumors of the possible departure of lightning-quick guard Tre Coggins for a while now. After being suspended for three games last season for a lack of commitment to the team and his military duties, Coggins went on to score 20 or more points in eight games. His decision to stay or go is the breaking point for the Falcons. The Academy returns all five starters and nine players who logged significant minutes off a team that went 6-12 in the MW a year ago. Should Coggins return, the Falcons could realistically end up as high as fifth on this list. If not, they’re liking looking at a No.7 or No.8 seed in next year’s conference tournament.

This is where things really drop off. After surprising everyone by finishing third in the MW last season, it is highly unlikely the Wolfpack will repeat the same feat. All-everything guard Deonte Burton is gone, likely off to the NBA. Senior Jerry Evans Jr. is also gone to graduation. Sophomore Cole Huff won’t be around, choosing to transfer for a shot to play his natural position of small forward elsewhere. That leaves guard Michael Perez and forward AJ West, who despite being good players in their own right, will more than likely not lead this team out of the conference cellar.

If there’s any team in the region hit harder by graduation, please stand up. The Aggies lose five seniors, four of whom were starters. Then, two weeks ago it was announced that starter Kyle Davis and key reserve Jordan Stone were leaving the program. Just like that the Aggies lost 78 percent of their scoring from this past season and return just two players who played more than ten minutes per game.

Despite everything said in the above paragraph, there is likely no one worse off than San Jose State. While the Spartans return almost everyone from last year’s team, the only real bright spot is sophomore-to-be Rashad Muhammad, the younger brother of former UCLA star Shabazz Muhammad. As one of only two players to average double-figure points, Muhammad led the Spartans with with just over 13 points per game. But as their best player, Muhammad led the team in minutes but started just three games. And with another recruiting class that ranks toward the bottom of the league, it looks as though the Spartans will spend another year as the league’s punching bag.