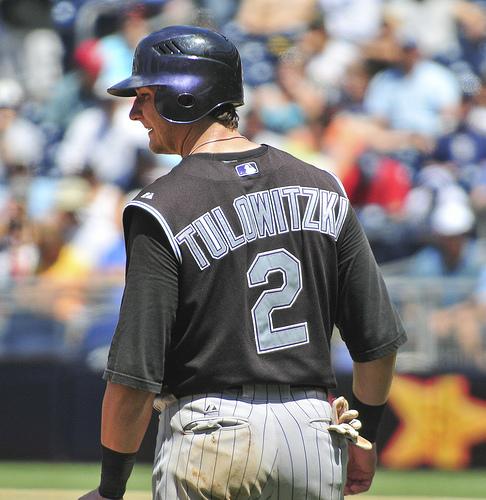 Troy Tulowitzki has spent more than seven years wearing a Rockies uniform. He’s been named an All Star three times and has won two Gold Gloves.

With Todd Helton now spending his summers hunting, Tulo is the face of the franchise.

But his time may be running out.

This time last year, I said that the Rox shouldn’t even pick up the phone when other teams called about the shortstop. I thought that Tulo would be an integral part of any playoff run over the next seven years.

However, that ‘when healthy’ qualifier continues to knock Tulo. From groin pulls to fractured ribs, the Rockies shortstop rarely seems to play close to a full season.

Tulowitzki looks to be in tremendous shape this year. He hasn’t lost a step going left or right. And that rocket of an arm hasn’t gotten away either.

Few middle infielders have even a fraction of the offensive capability as Tulo. The cleanup hitter for Walt Weiss once again in 2014, he’ll probably hit close to .300 with 30 home runs and 100 or more runs batted in.

But those stats are deceiving. Tulowitzki often plays out of his mind for two-week stretches before going into hibernation for the next month. Plus, he continues to make a habit of leaving runners in scoring position in big time situations.

Take a look at the starting pitching from last week and you’ll understand why Tulo could be dealt.

Sure, the front office made a nice offseason acquisition in Brett Anderson. But that’s all they did to improve the rotation.

And when Weiss had to replace ace Jhoulys Chacin with reliever Franklin Morales and number three starter Tyler Chatwood with Triple-A’s Jordan Lyles, it quickly became apparent that the Rockies had no depth for the rotation.

Trading Tulowitzki immediately brings the return of a middle-of-the-rotation starter, in addition to a potential prospect and cash considerations.

The team the Rox could partner with for this blockbuster deal?

Yes, Derek Jeter is healthy to start 2014. But Tulo could easily shift to third base or even become the designated hitter for the Yanks.

Tulo would then take over for the captain beginning next season.

Ivan Nova slots as the number three starter for Joe Girardi. The 27-year-old had 38 career wins and an earned run average around 4.00 as of last week. He’s always amongst the league leaders in strikeouts and has several complete games under his belt.

Consider this rotation with Nova, as well as Rockies prospects Jon Gray and Eddie Butler. Even next year, all these guys will be 28 years old or younger.

That may not be close to the rotations of the Dodgers or Giants, but it sure is more attractive than what the Rox have now on a daily basis.

Along with Nova, the Rox could probably land first baseman Greg Bird. That name should sound familiar to Colorado natives. Bird starred at Grandview High School in Aurora (he hit a home run at my high school that has yet to land).

He may still be about three years away from the majors, but Bird could be the Rockies’ first baseman of the future if Kyle Parker never pans out. He’s got great patience at the plate and can hit for both average and power.

A proven starting pitcher and potential long-term corner infielder definitely would be a nice return for Tulowitzki. The Rox could also get a role player and/or cash considerations.

The 29-year-old Tulowitzki is still in his prime, meaning he has the most trade value right now than he ever will.

If the Rox are serious about being playoff contenders, they have to get some quality starting pitching. Trading Tulo would be the most logical way to do that.