CSU rugby prepares for a much-needed win against CU 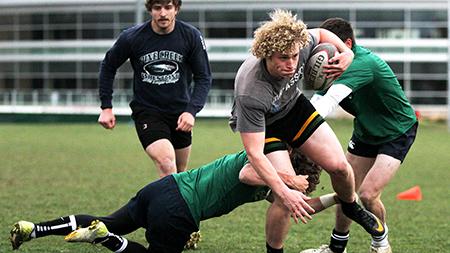 Kyle Eichelberger breaks a tackle for a try on Monday's practice. The Rams will be having their next home game on Wednesday April 10th at 7pm.

With three games left  before the start of spring playoffs, CSU rugby needs a win Wednesday against the University of Colorado to stay a contender in the Western Conference D1-A for college rugby. The Rams fell to Air Force 24-12 on Saturday, which dropped them from second in the conference to third.

“In warm-ups, we looked good,” co-captain Steve Karass said. “We were moving the ball well and it looked like we were going to take control of the game from the start. At the first kick off from Air Force, we missed the catch and played catch up from that point on.”

Saturday was the Rams’ second loss to the Falcons in the spring, which earned them a 2-3-1 record on the season.

“It was the beginning of the season and we have grown a lot since that game,” co-captain Carmine Hernandez said. “We were dominating from the start in my point, but the conditions threw up.”

With a mentality of what went wrong in the last game, Hernandez and the Rams set a goal heading into last weekend’s game of taking advantage of penalties, moving the ball fast and ultimately keeping the Falcons on their heels.

However, that goal was not accomplished. With the time clock continuing to tick in the second half, CSU could not break down the score gap.

“We were not able to get control,” Karass said. “Heading into (Wednesday), we need to win first and foremost, but we have to make some changes. We will need to come out strong from the beginning and take control. It is always a tough match against CU.”

With a continuous upward climb from the start of the season as the team transitioned players in new positions, the Rams have two games left on the spring schedule, which means there is not much time left to qualify for the playoffs. A loss for CSU means it could move to fourth in the conference and a two-game losing streaking heading into its match with Wyoming on Saturday. The Rams are one spot out of the playoffs at 13 in the D1-A, trailing San Diego State, Michigan and Wyoming.

The Rams have had three days to regroup and prepare for the University of Colorado, a rescheduled match from February. CSU will take on the Buffs on Wednesday at 4:30 p.m. on its home field, the IM fields south of Moby Arena.

“We are really hoping to get a big crowd of fans,” karras said. “Last year when we played CU, it was our last game of the season and it had the most fans at a game in my five-years here. I hope we can get that support tomorrow.”

Who: University of Colorado