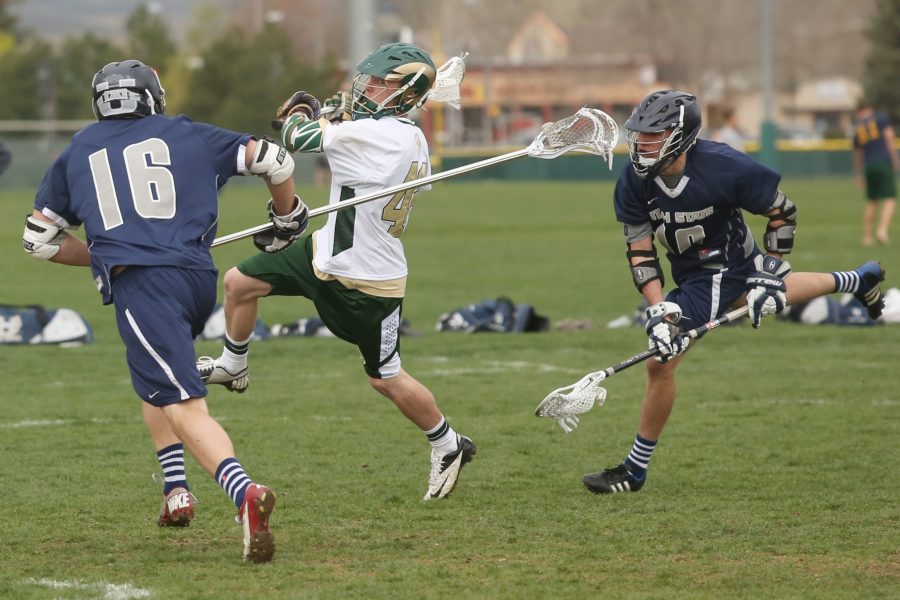 Sophmore attackman Jake Johnson (48) takes a shot after beating two defenders in Saturdays game against Utah State at the IM fields. Johnson led the Rams with four goals and one assist in the 20-9 win over the Aggies.

Jake Johnson simply wasn’t ready to be done. And neither were the rest of his teammates on the Colorado State men’s lacrosse team.

Behind a five-point game (four goals, one assists) from the sophomore, the fifth-ranked Rams dominated from start to finish in a 20-9 shellacking of Utah State in the RMLC quarterfinals Saturday afternoon on the CSU intramural fields.

Despite playing without their two best attackmen in captains Kacy Carter and Sean Smith, who have accounted for 58 goals between the two of them, the Rams didn’t miss a beat, getting two goals apiece from Sean Ross, Alex Wenzl, Chase Werner, Luke Ramsey and Matt King. In all, 12 different Rams recorded a point and every active player on the roster logged minutes for the first time all season.

Following their first loss to in-state rival Colorado since 2007 in last Saturday’s Rocky Mountain Showdown, the Rams scored early and often, taking out a bit of frustration while doing it.

“Honestly, I wish we’d have done it even more,” head coach Alex Smith said of his team taking out their anger on the Aggies. “My message all week was to be angry when we came to play today and I think we’re still just a young team that doesn’t quite have that killer edge yet.”

What looked like a mismatch from the beginning quickly turned into one as the Rams raced out to a 6-1 lead in the first nine minutes after Werner’s first of two goals. The Aggies brought it back within three on a pair of goals late in the first and early in the second quarter but any type of extended run was quickly ended after consecutive goals by attacker Sean Ross and another from Werner extended the lead to 9-3 with just under seven minutes to play in the half. The Aggies responded with a goal of their own with 5:28 to play to cut the deficit back to five, but that’s as close as they would get the rest of the way.

The Rams opened the second half in dominating fashion, scoring five unanswered goals in the first nine minutes, extending their lead to nine on back to back goals from Wenzl and Ramsey. The Aggies then responded with a quick 3-0 run but were unable to stop Johnson, who scored his third goal of the afternoon with 2:49 to play in the third quarter to extend the lead back to 15-7.

“You know, for us it was just about playing within the offense,” Johnson said. “We knew that we needed to pick up the slack with Kacy and Sean out and we just really worked this week on staying within the flow of the offense and playing our game.”

The Rams added five more in the final period, each coming from a different player, to extend their lead to 20-9 before coasting to their 11th win of the season.

Next up, the Rams will travel to Grand Junction to take on No. 3 BYU Friday at Walker Field in the RMLC semifinals with a trip to the conference championship game and a possible rematch with either Colorado or Westminister on the line.

After losing to the Cougars 10-7 less than two months ago, players and coaches alike admit they will have a bit of revenge in mind when they take the field Friday.

“The RMLC tournament is the best four-team conference tournament that there is right now with the second, third, and fourth ranked teams in there and BYU is obviously a huge rival for us,” Smith said. “Winning the tournament is motivation in and of itself but after losing to them earlier this year, I don’t think our coaches will have to tell them how big this game is.”