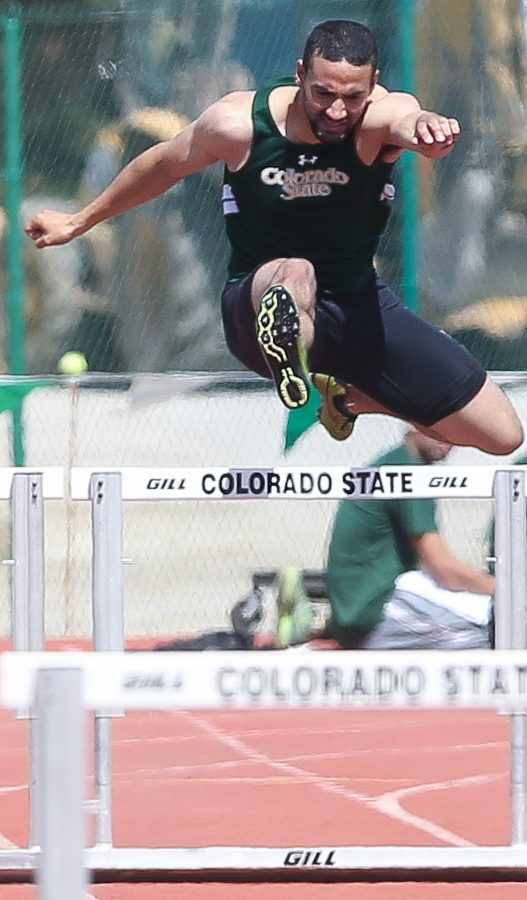 Colorado State runner Trevor Brown clears a hurdle next to on his way to a win in the 400m hurdles on at the Fum Mcgraw Quadrangluar on Saturday. Brown was named Mountain West player of the week after his performance at the meet.

The Mountain West announced Colorado State senior Trevor Brown as the men’s outdoor track and field athlete of the week Tuesday. This is Brown’s fourth career award, and first during the 2014 season.

Brown won both men’s hurdling events at the Fum McGraw Quadrangular Saturday, hosted by Colorado State. Converted for altitude, his times of 13.92 in the 110-meter hurdles and 51.91 in the 400 hurdles rank first in the conference and in the top 15 nationally.

Brown’s success on Saturday moved him up 10 spots in the national rankings this week. The Colorado Springs native is the only athlete in the Mountain West to run a sub-14 second time in the 110 hurdles and sub-52 second time in the 400 hurdles this season.

The Rams will split their squad up this weekend. Part of the team will travel to the Stanford Invitational in Palo Alto, Calif., while the remainder of the team will be at Northern Colorado for the rescheduled Tom Benich Invitational. CSU will host the hammer and discus throws portion of the meet Saturday at Jack Christiansen Track beginning at 10 a.m. MT.