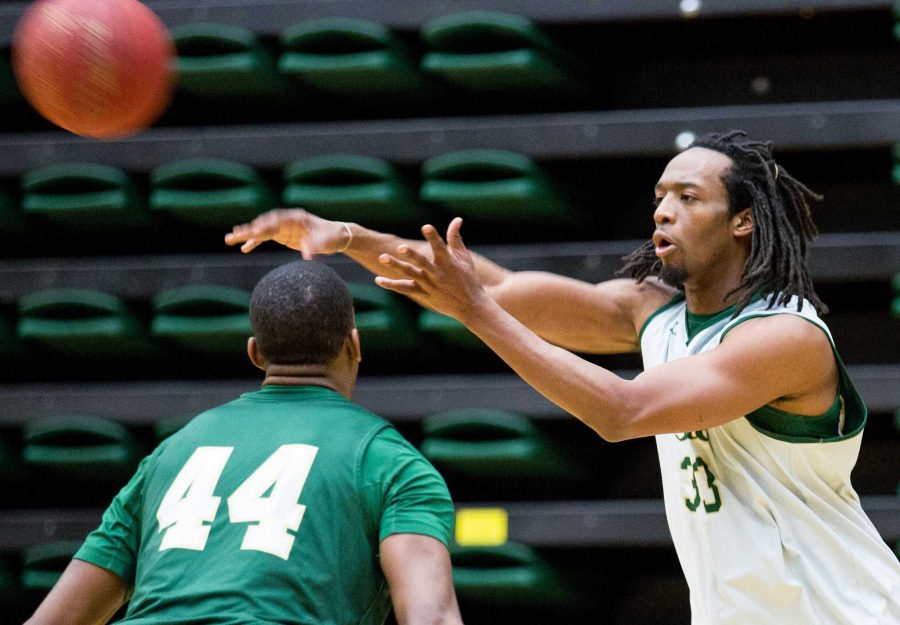 Dwight Smith, 33, passes the ball over his brother Greg Smith's shoulder in practice Monday morning in Moby Arena. After having a good season last year, Dwight chose to red shirt this season.

In what has been an off-season full of turnover for the Colorado State men’s basketball team, it was announced Tuesday afternoon that redshirt junior guard Dwight Smith has been granted his release from the program.

Smith will graduate from CSU with a Bachelor’s degree in May and will be eligible to play immediately at another program.

News of Smith’s departure comes less than two weeks after freshman guard David Cohn and junior forward Marcus Holt were released from their scholarships. Colorado State now has one open scholarship for the 2014-15 season.

“I just want to officially say that I’m thankful for every second I’ve had here at CSU, the school, the environment, and all the people that I have met throughout the course of these four years,” Smith said in a statement released by the athletic department. “I’m tearing up thinking about how much this school means to me and the people that have affected my life.”

For Smith, a fan favorite and the younger brother of former CSU standout Greg Smith, Tuesday’s news closes the book on what was a promising but tumultuous career at Colorado State. During his first two seasons with the Rams, Smith played in 50 games, starting eight, including his first career against Duke University at Cameron Indoor Stadium.

However, after former head coach Tim Miles left for the University of Nebraska, Smith sat out the 2012-13 season as a redshirt after reportedly being told by incoming head coach Larry Eustachy that he would struggle to find minutes on a team that included five senior starters and key reserves Daniel Bejarano, Jon Octeus, and Gerson Santo.

Coming into this past season, though, pastures looked green for Smith with the departures of those seniors and the chance at possibly sliding into the vacant shooting guard or small forward spots. However, an injury-plagued beginning to the season, which included a broken thumb and a sprained ankle, along with tension between he and Eustachy allowed him to play in just six of the Rams’ first 20 games.

Despite those issues, Smith began to find his way into the rotation late in the season, including a 21-point outburst against Utah State in the first round of the Mountain West Conference tournament. But even with the transfers of Cohn and Holt, Smith found himself on the outside looking in when it came to possible playing time next season.

And although their relationship was rocky at times, Eustachy had nothing but praise for Smith when commenting on his departure and believes somewhere down the road the two will reconnect, possibly with Smith becoming an assistant coach on Eustachy’s staff whenever his playing days are over. For now though, he simply hopes to help him make the best decision possible for his future.

“This is kind of a Catch-22,” Eustachy said. “He would impact winning for us next year, but it’s really what is best for him … I’m happy for Dwight. I’m going to work to find the best situation for him, we’re going to work together.”