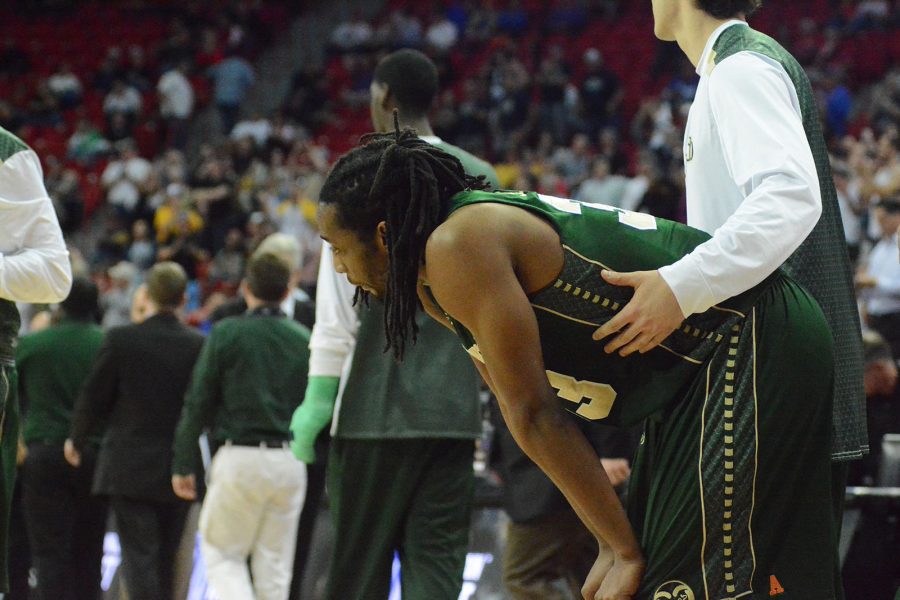 LAS VEGAS, Nev. – What looked like the beginnings of a Cinderella story for the Colorado State men’s basketball team quickly became a Sin City nightmare Wednesday afternoon at the Thomas and Mack Center.

With a 10-point lead and just over two minutes to play, it looked as though the Rams would steal an upset of eighth-seeded Utah State in the first round of the Mountain West Conference tournament.

What ensued was one of the most improbable and utterly heart-breaking collapses in Colorado State basketball history.

Leading 64-54 with 2:19 to play, what looked like done deal was anything but as the Aggies used a furious 19-5 rally to stun the Rams 73-69 and move on to a quarterfinal matchup with No. 7 San Diego State on Thursday.

“I’m not even sure (what happened down the stretch),” junior guard Jon Octeus said. “They capitalized on a lot of our mistakes. (They) knocked down free throws, we didn’t. (They) took care of the ball, we didn’t. The last two minutes of the game we just forgot to show up.”

Despite a combined 6-28 shooting effort from All-Mountain West players Daniel Bejarano and JJ Avila, CSU had multiple chances to put away the Aggies. What started with a 3-pointer by USU guard TeNale Roland with 2:12 to play quickly escalated after consecutive 3-pointers by Jalen Moore and Spencer Butterfield and a technical foul Bejarano. After leading for the previous 18 minutes, the Rams (16-16) found themselves in an all-too-familiar situation on the wrong end of the scoreboard against the Aggies.

Still, the Rams trailed by just one with 19 seconds to play before Utah State closed out the game at the free throw line, hitting all six of their attempts.

Following the game Utah State head coach Stew Morrill was in absolute disbelief of what had just happened.

“I’ve been coaching a long time and I’ve never been a part of something like that,” Morrill said. “That was wild.”

Early on, it looked as though CSU would be run out of the Thomas and Mack Center, trailing 14-5 less than five minutes into the game. But behind 13 of Dwight Smith’s game-high 21 points, the Rams battled back to tie it at 31 heading into halftime.

From there, CSU controlled the second half, leading from the 19:17 mark until Butterfield’s free throws following Bejarano’s technical with 40 seconds to go gave the Aggies a one-point lead. After jawing with Aggie center Jarred Shaw, Bejarano began taunting Roland and was called for an unsportsmanlike technical by head official Randy McCall.

“Following a made basket by Utah State, player number 2 (Bejarano) from Colorado State began taunting Aggie players #5 (Shaw),” McCall said in a statement following the game. “When number 5 turned around to walk away, number 2 from CSU began taunting another Utah State athlete. CSU player number 2 was assessed a Class A unsporting technical foul based on Rule 10, Section 3, Article 1B.”

After the game, Dwight Smith couldn’t hide his disappointment despite his career performance.

“I just wanted to win this game, (my stats) don’t even matter at this point,” Smith said before laying his head onto his arms in disbelief.

For a team decimated by injuries and a lack of scholarships due to NCAA transfer rules, a win Wednesday afternoon would’ve been sweet revenge after losing twice to the Aggies earlier this year. What started as a story of possible redemption quickly devolved into a thriller worthy of a Hollywood script.

Unfortunately, there was no happy ending for the Rams in this one.

Still, CSU head coach Larry Eustachy praised the effort of his team after one of the more heart-breaking losses in his more than 20 years of coaching.

Next Up: The Rams will await a possible bid to either the College Basketball Insider (CBI) or CollegeInsiders.com postseason tournaments. Stay tuned to the Collegian for news regarding a possible fourth-consecutive postseason appearance for the CSU men’s basketball team.