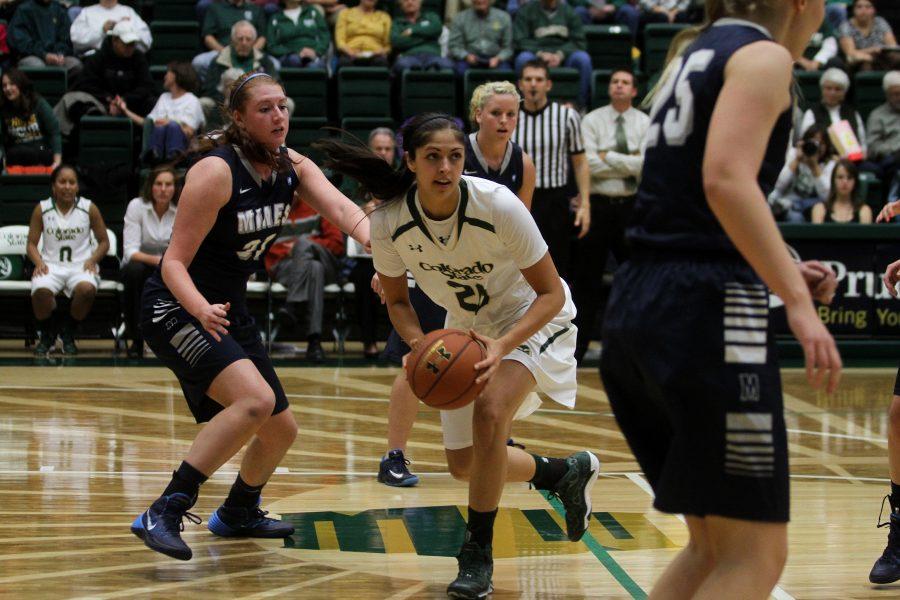 Junior Forward Kara Spotton (20) moves to make a play against Mines. The Rams win over Mines 95-47 during a Women's Basketball exhibition held at Moby Monday night.

After a season that started out with eight new faces and many questions of compatibility, this team can hang up their uniforms with their heads held high and a few new records penciled into the CSU record book.

When this team began their season, they did so with one goal in mind: bringing home the conference title. Even though they fell one win short of that goal, the Rams consider their season nothing less than successful.

“It was a very successful season, even though it’s kind of hard looking back at it now having lost to Fresno in the conference tournament and again to Southern Utah in the WNIT,” guard Gritt Ryder said.

“But we had a lot of strengths as a team this season. Our biggest strength was definitely our team work and how we cared for each other and played for each other. We had different people that would step up whenever we needed someone to and we didn’t rely on one single player to get things done. It was always a team effort and I think that’s why we were such a tough team to guard.”

The Rams have had some time to reflect on both the strengths and weaknesses of this season’s efforts, while also looking to fill the gap that will be left by three departing seniors.

“Even though teamwork was one of our biggest strengths, I also think that we can continue to improve upon that,” Ryder said. “ We can get after each other a little bit more in practice and be even more competitive with each other. Just always demanding more from one another.”

Even though there are finite skills this team looks to improve upon for next year, some challenges will not be so easily overcome.

Seniors Sam Martin, Hayley Thompson and Alicia Nichols will be leaving holes that will be difficult to fill. Each of them brought their own set of strengths to the table for this team and filling those voids is a task this team isn’t necessarily looking forward to.

“Those girls will definitely be missed both on the court and off the court,” Ryder said. “But, every year you lose some and you gain some, so I’m sure that we will have some great new players coming in that will be ready to fill those spots. I know that we have a team that will be able to step up with what we’re missing on the court. We’ll develop a new system where you won’t see that we are missing those players.”

When it comes to looking ahead to next season, many players haven’t even had the chance to look that far into the future. They know that they are more than capable of adapting to new incoming players as well as new styles of playing and that they are a resilient team that is able to recognize their flaws while constantly thirsting for more and more wins.

This team has battled tough competition, tough losses, the incorporation of eight brand new teammates and the stigma that comes with having an 11-19 record the previous season. But despite all of those pressures, they still made it to the conference championship game.

Although not many of the players know what to expect for next year, they will continue to have the same goals in mind and continue to work hard to get there.

“We haven’t even really talked about next season as a team but for me personally, I want to do everything that we did this year, and then even more,” Ryder said. “I want us to win the conference tournament and then go to the NCAA tournament. That’s a goal for me as well as for a lot of the girls on this team. We’re excited to see the new players coming in and then we’ll see how we will all work together.”

Collegian Reporter Hannah Cornish can be reached at sports@collegian.com and on Twitter @HMCornish.