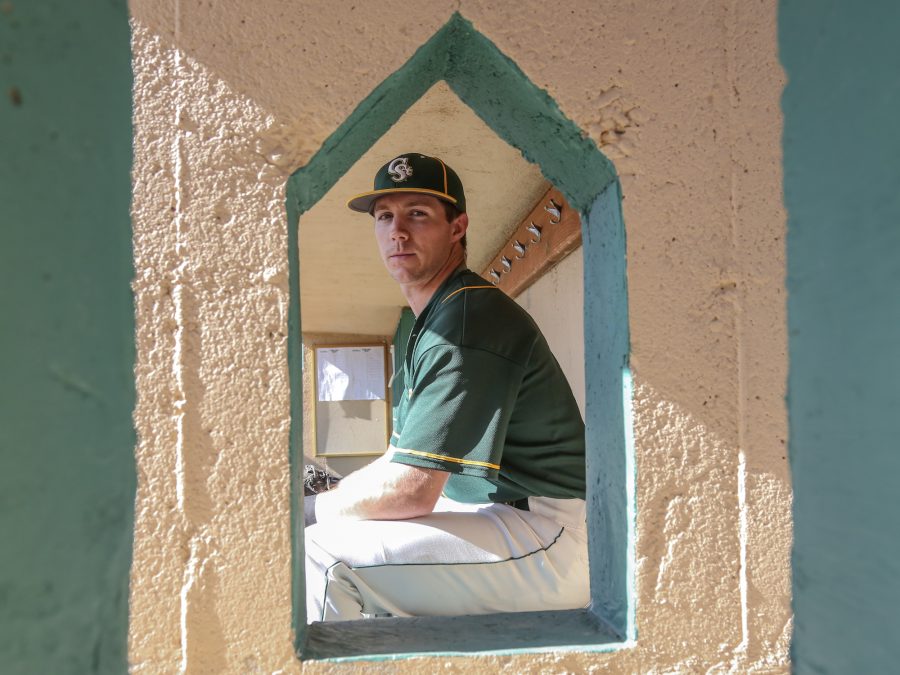 Colorado State center fielder Greg Hart in the dugout at City Park Fields, Hart is leading the team in runs with 16 in 17 games.

For many sports teams, their senior players are the ones who best encapsulate the fundamental values of the team. They’ve seen the highs and the lows, the good and the bad and have shaped the younger players into the athletes they will become.

For CSU’s baseball team, center fielder Greg Hart is that player. As a fifth-year senior, Hart has been apart of winning a national title, as well as seeing this team transform through talented new players along with coaching changes.

“Throughout my career, there’s been some ups and downs, some coaching changes and things of that nature,” Hart said. “But I think those changes were good for the team but its definitely been a building process. Overall, my time here has been a great experience and the guys are like my family.”

Of the 21 players that are on the roster, there are two who know Hart particularly well and have seen through virtually everything. Head coach Nick Childs has known him for half of a decade, on multiple levels.

“I’ve known Greg both as a teammate and a coach. I played along side him for two years and have coached him for three,” Childs said. “He’s incredibly talented. He’s played a lot of different positions on the lineup and its mostly a testament to how athletic he is, so thats the best part about him. He’s willing to do whatever will help them team out the most.”

Childs has been able to see Hart grow throughout his career and watch his talents transform and propel him into the position of a leader.

“He does everything really well and he’s developed into a good leader,” Childs said. “He’s very competitive which is awesome and he’s learned how to control that along with leading instead of just having raw competitiveness. Greg has developed more of that leadership role the past two years so thats what we will miss next year; not just him being one of the better players, but his leadership has been very important.”

In addition to Childs’ relationship with Hart, Greg’s younger brother Matt is apart of the team and has seen aspects of Greg’s professional and personal life that other teammates have not.

“He was really small back in high school, but he had a good arm and was all conference for hitting,” Matt said. “It’s good getting to play with my brother though, he gets on me a little more than anybody else. It’s been good and its a lot of fun. We will definitely miss his leadership role next year though. He does a lot for the team and cares a lot about the program and we’re going to miss that, and personally I’ll just miss playing with my brother.”

As all senior athletes experience when their career is nearing it’s end, Greg knows that he will miss many aspects of his baseball career.

Even though he plans to continue to pursue a career in baseball, either as a player or as a trainer, when he graduates, he knows nothing will ever be the same as playing on the field with his brother and friends wearing that green and gold uniform.

“I’ll miss just playing the most, but I’ll also miss the guys,” Greg said. “The relationships I’ve built are greater than anything that baseball itself can give you, the relationships are huge.  But it’ll definitely be different not playing with my brother. It’s cool to share the field with him since I’m center field and hes right field. The hardest part will be watching the others play when I’m not out there.”

Collegian Reporter Hannah Cornish can be reached at sports@collegian.com and on Twitter at @HMCornish.

Plays alongside his younger brother, Matt, on the field.