Grayson at the helm as CSU football begins spring practice 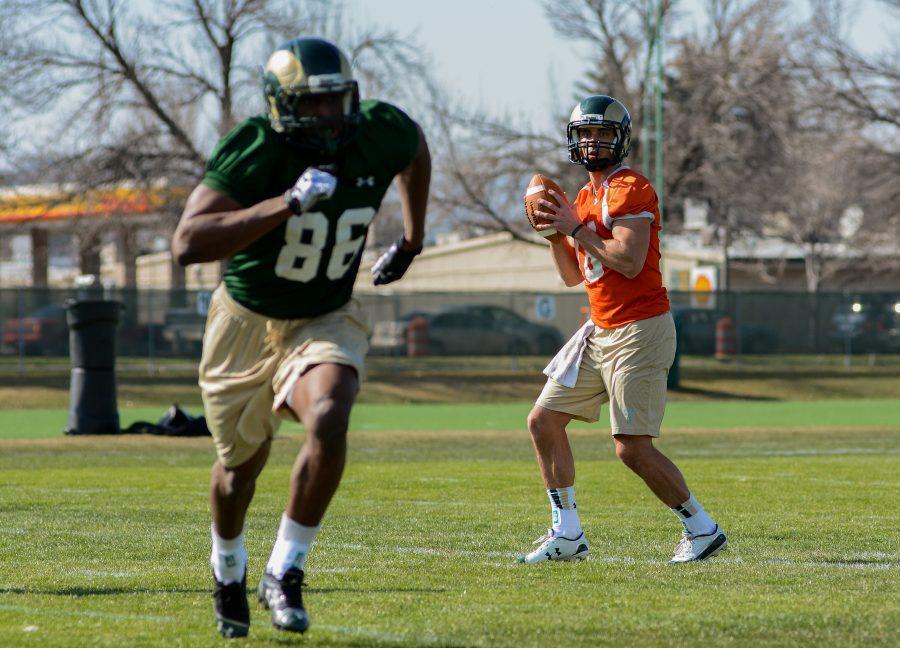 Quarterback Garrett Grayson (18) throws to tight end Brett Jordan (88) at practice this Tuesday. The Rams are getting back to practice to prepare for another season this fall.

At first glance, you likely wouldn’t peg Garrett Grayson as the starting quarterback for the Colorado State football team.

At about 6′ 1″ and 220 pounds, Grayson probably won’t remind you of guys like Peyton Manning, Tom Brady, or even Florida State quarterback Jameis Winston.

But, luckily for Grayson and the rest of the CSU program, football isn’t a game played on paper. Because, despite not looking like the prototypical quarterback,  Grayson can play.

But, it wasn’t always this way for the senior-to-be from Vancouver, Wash.

Rewind just 18 months to the fall of 2012. After battling freshman Conner Smith and walk-on MJ McPeek, Grayson earned the starting job in head coach Jim McElwain’s first season with the Rams. And after beating rival Colorado 22-17 in their season opener, it seemed as though Colorado State had their guy. But, then the wheels began to fall off, first by losing to FCS member North Dakota State. Then came a 40-20 blowout loss on the road at the hands of San Jose State. By the time CSU rolled into Colorado Springs to face rival Air Force, the Rams were 1-3 and reeling.

Then, on a routine three-yard run, Grayson was hit by an Air Force defender. Unlike he had in the previous four games, Grayson didn’t get up. It would be found out later that his sophomore season was over after breaking his collarbone on that play. For the second consecutive year, Colorado State finished 4-8.

Fast forward to last spring. After fully recovering from his injury, Grayson, then a junior-to-be, was in a heated battle again with Smith for the starting spot. And, again, he got the job.

Now, move ahead to last year’s season opener against Colorado. Following a 41-27 loss to the Buffs, media members and fans alike questioned whether McElwain had made the right decision, choosing more of a game manager in Grayson versus a strong-armed gunslinger in Smith. And as the Rams struggled to a 1-3 start, questions arose about when Grayson would be replaced.

After a year and a half marred by injuries and a lack of confidence, Grayson finally found his groove. Behind the first three-touchdown performance of his career, Grayson led the Rams to a 59-42 over the UTEP in the fifth week of the season.  Following that win, Colorado State reeled off six more in their final nine games; including a come-from-behind thriller against Washington State in the 2013 Gildan New Mexico Bowl.

But despite a bowl win and record-setting 3,969 passing yards and 23 touchdowns, that team didn’t belong to Grayson.

“I knew this was kind of Weston’s team,” Grayson said in reference to former standout center Weston Richburg. “I didn’t want to step on anyone’s toes, I just wanted to lead by example and do everything right.”

However, with the loss of Richburg, as well as senior standouts Shaquil Barrett and Crockett Gilmore to graduation, Colorado State needed a leader. And that’s exactly what Grayson wanted to be when the Rams took the practice field for offseason conditioning this winter.

After completing his first spring practice as the bona-fide starter on Tuesday, Grayson hung around the practice field for more than 15 minutes seeming to take the moment in.

But, ask anyone around the Colorado State football program and they’ll tell you he’s right where he belongs.

Smith looking to transfer: With the beginning of spring practice came the news that backup quarterback Conner Smith has left the team and will look to transfer to another program this spring. Smith, a 6′ 5″, 220 pound sophomore from Richmond, Texas, completed 80 of 126 passes for six touchdowns in six games during the 2012 season. After battling with Grayson last spring, Smith bounced around between the No. 2 and No. 3 spots on the depth chart last season. Smith will have two years of eligibility remaining per NCAA rules. Should he choose to transfer to another Division I program, he will likely sit out next year as a redshirt. However, if Smith choose to play at the FCS level, he will be able to play immediately.