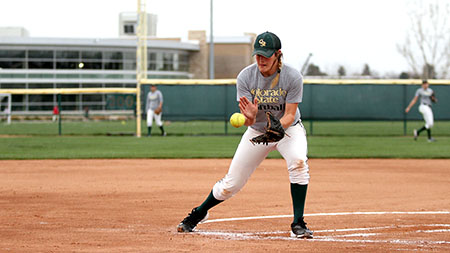 Freshman pitcher Holly Reinke catches the ball and makes a play to first base at practice last week. .

There is no easy way to pick up the pieces after a sweep against conference opponent Utah State and a one-run loss to in-state neighbor University of North Colorado. But for the CSU softball team, it must be done.

“It has been a hard work for these ladies,” head coach Jen Fisher said. “They want it so bad.”

The Rams have added one week of practice since the beginning of their slump and are looking to bounce back Friday at 4 p.m. when they take on Boise State.

“We just have to play our game and that is really what we have been working on this week,” senior infielder Chelsea Biglow said. “I hope we can take that into Boise State and be successful. It is going to be vital for us to get as many wins as possible this season and in conference and we just need to take it one day at a time.”

To have a successful weekend at home, CSU will need to shut down steals  and rely on its defense to make plays to keep opposing runners off of the bases.

“I have always felt that they are a lot like us, they just wont give up,” Fisher said. “They do a lot of things really well, but they might not do any one thing particularly amazing. They just do everything well which makes them a really solid team.”

What keeps the Rams neck and neck into the late innings of their games this year is their ability to hit the long ball, keep runners on bases as well as having what coach Fisher would say as three key starting pitchers. The Rams lost senior Kacie McCarthy last season, but it has not proven to be an issue this season. Holly Reinke and Molly Randle have been the leaders on the mound in 2014.

“Our pitching staff is extremely versatile,” Biglow said. “They all have such different technique and different styles, so I think they will do great and keep Boise State on their toes.”

Reinke has recorded season highs in strikeouts (8), putouts (25) and doubles (4) despite falling 0-3 over the past three games, in which she recorded a 0.98 ERA.

“We are really trying hard not to panic,” Fisher said. “We truly believe that the team that wins the conference will have three or more losses. What is going to be extremely difficult in this conference? I think to go 21-3 is going to be difficult for anybody.”

The Broncos stand strong in the conference with a 2-1 record and 17-13 overall on the season. Four players have recorded 10-plus RBA, and three have at least 30 hits.

Leading the offense is Ashley Palmer with a .380 batting average, six doubles, five home runs, 26 RBI and 18 walks. Boise was picked ahead of CSU in the Mountain West preseason poll, but the Rams lead the season series 4-2.

“The thing about them is that you can not be back on your heels because they (Boise) will attack,” Fisher said.

CSU will take the field Friday at 4p.m. in the first of three games against Boise State. Play will continue Saturday and Sunday at 1p.m, games are available for a free live stream on the Mountain West Network.

Collegian Assistant Sports Editor Haleigh Hamblin can be reached at sports@collegian.com and on twitter @haleighhamblin.