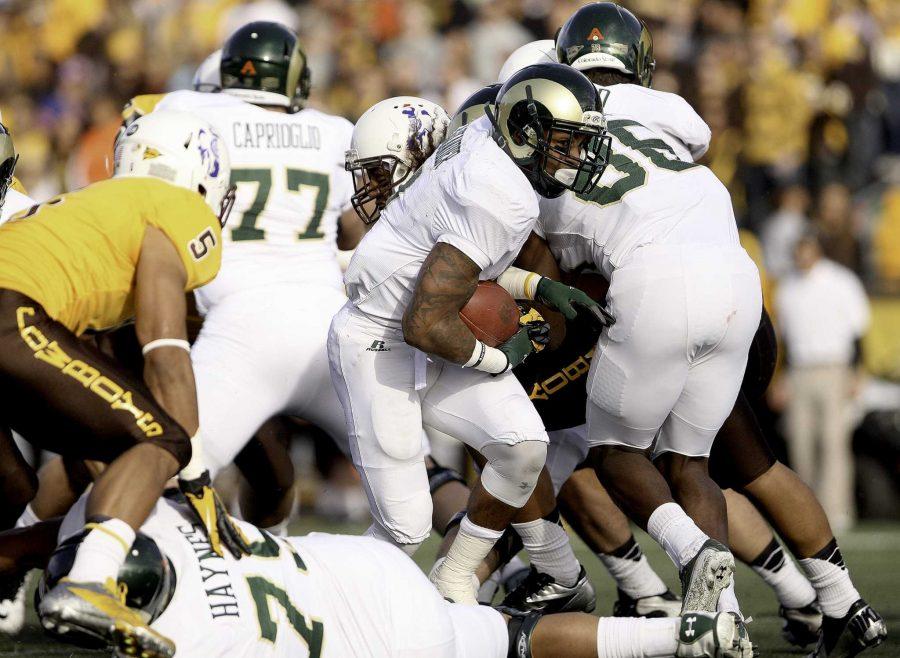 Freshman Donnell Alexander (7) runs during the third quarter of Saturday loss to Wyoming at War Memorial Stadium. The Rams were defeated 45-31 and now have a record of 2-6.

Alexander, who was projected as the starter after star sophomore Kapri Bibbs announced that he would declare for the NFL Draft back in late December 2013, was present at the beginning of CSU’s 15 official spring practices allotted by the NCAA.

According to McElwain, Alexander’s departure was a decision based on personal matters that he wished to have remain undisclosed. According to the Arapahoe County public records, Alexander’s mother is facing felony charges with an arraignment scheduled for next week.

McElwain noted that Alexander is still on scholarship with CSU through the end of May. The door would remain open for him to return if or when, he decided to come back to play for the university. But on Saturday, McElwain was informed that Alexander had officially been granted his release and was already drawing interest from at least one other school.

“He’s taking care of some things right now. It’s tough what these guys go through, we’re here to support him in every way we can. He’s got to find where he wants to be and we support him with any decision he’ll make,” McElwain said. “In the talk we had, he’s unhappy,sometimes in life when you’re unhappy, maybe a change of scenery. I’m totally there to support him. The guys talked about it in the team meeting, they’ll do everything they can to help him as well.”

Alexander ran for 428 yards on 71 touches in the 2013 season, reaching the end zone twice. He played a key role in CSU’s 2013 Gildan New Mexico Bowl appearance, in which he put the finishing touches on the Rams’ two-point conversion attempt late in the game. In his two seasons at CSU, Alexander posted a total of 1,015 yards and six touchdowns.

The Rams are now tasked with filling the void at the running back position after both Bibbs and Alexander have exited the program, and upcoming junior Davon Riddick made the switch over to defense to help the secondary at the cornerback position.

“We’re going to adjust to the personnel that we have,” offensive coordinator Dave Baldwin said. “We’ll just have to find what we’ve got when we go into fall camp and it’s not right now. There will be no conclusion of what we have until we get into fall camp and really figure it out, that’s the way it always will be.”