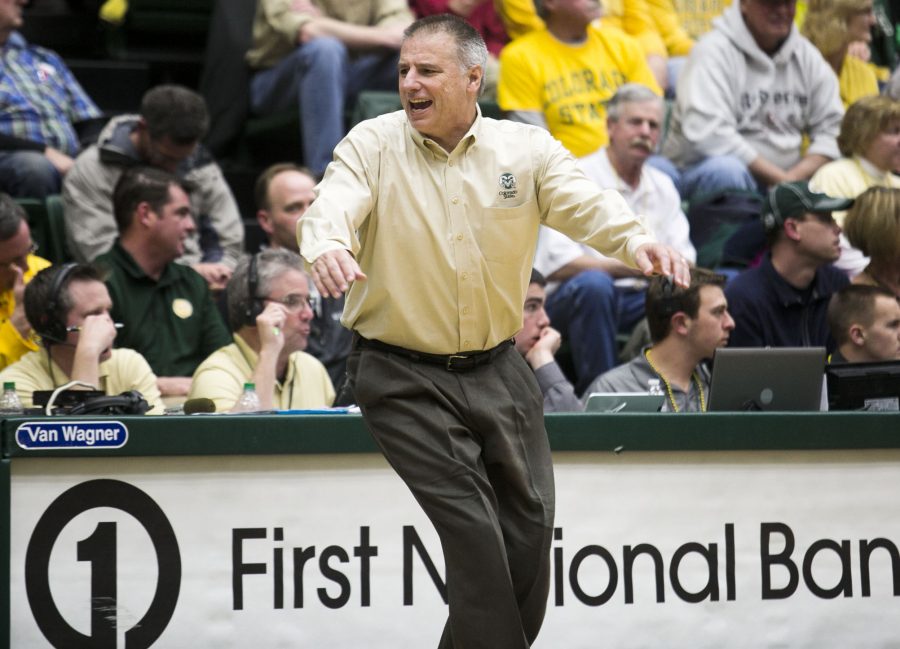 CSU head coach Larry Eustachy, shown last season in a game against Utah State, could see a nice financial windfall should his team make the NCAA Tournament this year.

LAS VEGAS, Nev. — There’s a sentiment shared in the sports world that it is nearly impossible to beat the same team three different times.

Whether that’s because of familiarity, revenge, or a combination of the two, more often than not, that sentiment holds true. And while they hope that trend continues, the CSU men’s basketball team isn’t betting on trends when they face Utah State for the third time this season on Wednesday afternoon at the Thomas and Mack Center in Las Vegas.

After losing to the Aggies both at home and on the road earlier this year, the Rams will be looking for revenge with a chance to play top-seeded San Diego State Thursday in the quarterfinals of the Mountain West Conference tournament.

“Yeah, I’d say it’s hard to beat the same team three times because each team knows what the other is going to do, and knows what they run,” junior guard Daniel Bejarano said. “For them (Utah State), they run about a million plays and we know that, but we are trying to just look at this as a new start to the season and we want to just go out and get this win.”

Getting that win will be more challenging than the Rams expected with the loss of starting center Gerson Santo to a fractured left hand that will sideline him for the rest of this season. Monday, head coach Larry Eustachy announced that junior guard/forward Dwight Smith would start in Santo’s place.

That means an already undersized Rams squad will get even smaller, starting just one player taller than 6-foot-4. Despite that, guard Jon Octeus is excited at the opportunity to surprise a team he thinks may be overlooking the Rams after Santo’s injury.

“I hope they do (think they can beat us up down low),” Octeus said. “We’ve been preparing to play without Gerson, it’s obviously not what we planned but I know we’ll be ready. From the time we met this morning for film until now everyone has been ready to go.”

While the Rams will have a different look than they have all year without Santo, don’t expect to see anything different from a team who’s played with a bit of a chip on its shoulder all year after losing five senior starters. And although they have given up a considerable size advantage in both the previous matchups, CSU did win the rebounding battle in the first meeting, something that they expect to happen again.

“When it comes to the opportunities where we have to bang with them down low, as a leader on this team I’m going to make sure I’m down there with Marcus (Holt) and J.J. (Avila) and just know that we’re going to need our guards to rebound and that starts with me and Daniel (Bejarano),” Octeus said.

For Eustachy, Tuesday’s game comes down to focusing on the details, such as hedging ball screens and fighting through back screens, something his team struggled with in both losses earlier this season.

“We have defensive principles that we need to follow such as staying with your man when they back screen or stepping out and showing when they set one on the ball,” Eustachy said. “When we follow our principles and play our game we win, and when we don’t, we lose.”

Tale of the Tape: