Breaking Down the Nuggets’ roster: Does Kenneth Faried fit in Denver’s future? 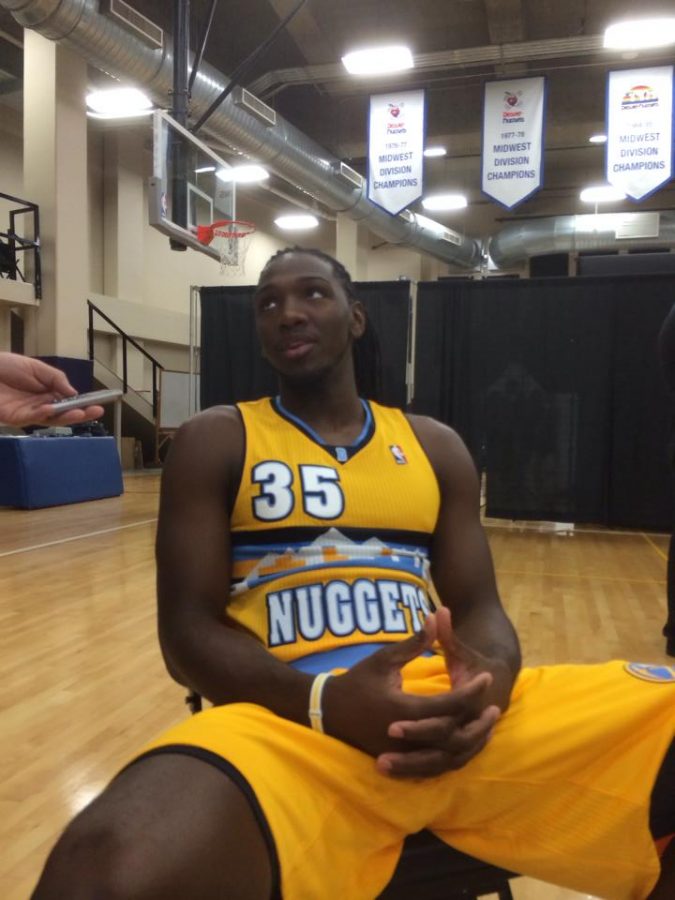 DENVER-Three months ago Kenneth Faried was the most undersized and overhyped power forward in the game of basketball.  Amidst a scoring slump and lack of production and effort, Faried’s name was tossed into the forefront of trade rumors across the league.

His lack of enthusiasm night in and night out was evident in the locker-room. His answers to questions from the media, if one was even offered, were truncated with lack of eye-contact and enthusiasm. His demeanor was stale at best, as tales that the Nuggets were shopping his name around the NBA were quickly thrown around the league.

The Toronto Raptors and New York Knicks emerged as “front-runners” in the Manimal sweepstakes. The Knicks were looking to unload the contract of Ray Felton alongside Iman Shumpert. The Raptors, on the other hand, had former Nuggets’ GM Masai Ujiri on their side, the same man who drafted Faried with the 22 overall pick in 2011.

The Nuggets’ front office never acknowledged their part in the trade rumors of Faried. It was clear, Andre Miller was the only person they were focusing on getting out of the building. Any time GM Tim Connelly was asked about the rumors, he would defer as any other GM would by saying the typical “we are always looking to improve our team.”

Well, the trade deadline came, and went. And, as we all know, Faried is still sporting the powder blue jersey. At the same time, his play is also back up to a level not seen before.

So, what does this mean for the Nuggets in the coming two years, and how does his presence impact both play, and salary cap? Let’s dive into the stats.

Prior to preseason this year, Faried’s team-option in his contract was picked up by Denver. By picking up his team-option, the Nuggets were able to keep him on the Nuggets’ 2014-2015 roster for a cheap rookie-contract rate of $2.25 million.

If his play continues to excel at the rate it is right now, and the Nuggets decide to keep him on board, Faried’s contract is set to spike to the range of $7-10 million come the 2015-2016 season.

That may seem well worth-it to the casual basketball fan. However, the logistics of that salary on the current Denver roster can’t logistically work. At least, with this ownership, it won’t work.

Check out these contractually-guaranteed contracts for the 2015-2016 season:

Assuming Wilson Chandler will be kept on the roster, and Foye will still be lobbing up 3 after 3, the Nuggets will spoil $52 Million of their expected $59 Million salary cap on six players alone. Meaning the Nuggets will have to form the rest of their 7 roster spots with $7 Million.

So, where does Faried fit in that equation?

There is no way, at this rate, that Faried will be signed to a contract extension less than $6.5 Million. Not only is he currently one of the Nuggets’ most productive players at the moment, he is also serving as the face of the franchise alongside Ty Lawson.

Marketability is a key factor into contract negotiations. Look at Kobe Bryant. He hasn’t played more than a couple weeks this season, and he just signed a contract extension worth double the Nuggets’ highest paid player.

If the Nuggets decide Faried is part of their long-term future, then JaVale McGee has to go.

If the Nuggets decide Faried is not part of their long-term future (which I assume they will decide he isn’t), expect to see him sign-and-trade before the trade deadline next season. And he won’t go alone. Expect a package.

Dillon Thomas is your inside source to the Denver Nuggets and the NBA. You can follow him on Twitter: @DillonMThomas