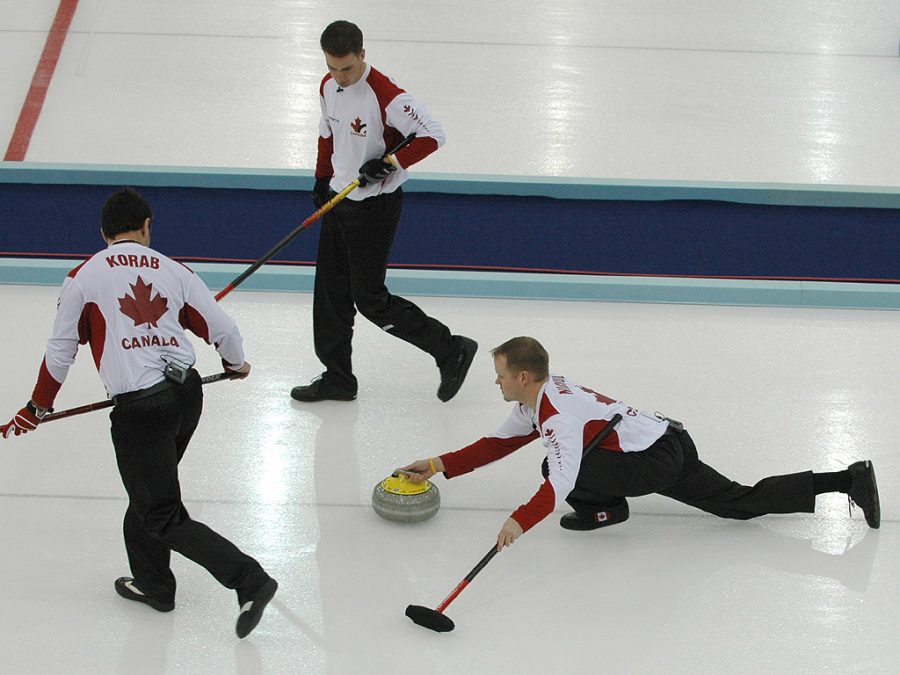 By far the strangest sport of the Winter Olympics, Curling is most easily described as a giant icy version of shuffleboard. Two teams have their own set of large, polished stones that are pushed down a rectangular sheet towards a target. While the stones slides, two teammates, also referred to as sweepers or brushers, sweep the ice with brooms to direct the stone to the best placement on the board.

At the opposite end of the target, one teammate is directing the sweepers where to sweep in order to have the stone curl in on the target or on the outer rings. Teams aim to have their stone be the closest to the center at each round while maintaining as many of its own stones on the target at a time.

Curling is also an excuse for middle-aged individuals to qualify for the Olympics.

1. The team with the closes stone to the center of the target at the end of each round wins the point. Teams will alternate shots for eight rounds of curling.

2. Brushing Is used to reduce the friction the stone has, ultimately meaning the stone will move faster. If the team wants the stone to spin in a targeted direction down the ice, the brushers will brush in front of the stone and to one side.

The luge is a narrow sled that speeds down mountains at faster speeds than both the skeleton and the bobsled. It’s inclusion as a weird event lies in its extreme danger, yes people have died in the Luge.

Athletes lie on their backs on a sled as it travels down an icy water slide in order to earn the fastest time. Until Tueday night, the United States had never earned a metal in the women’s Luge, though Erin Hamlin received the bronze medal behind Germany.

Tips for a fast time:

Some athletes put a yellow line on their helmets that reminds them to keep ones head back on the sled, thus allowing the flattest surface going down the hill.

The push off on the top of the run is by far the most important. Athletes use its hands to push on the ice and then lay down for a ride that could give them a medal in the Olympics, but it could also be their last. This event is known to several dangerous accidents. As if cross country skiing was not hard enough, the Olympics committee increased the challenge to shooting targets at check points along the race. Yes, skiing and shooting together, enough said.

In between a cross-country race, athletes pause to take five shots at a target, race again, and shoot against until they havecompleted the required number of loops. If a shooter misses the target, time is added to the final score

To think it is not hard enough to ski and then pick up your gun at the check-points, athletes must carry the gun on its back while skiiing. Yes, it is basically a back fanny pack but for your gun. Needless to say, this sport was created by combining two odd hobbies into one.

The name of this sport says it all because more often than not the athletes skeleton is all that remains once the sled comes down to the finish line. Skeleton athletes run at full speed and then belly flop onto a sorry excuse for a sled.

With ones who body on the sled, athletes fly down an icy water slide face-first. Not to mention the sled in skeleton does not have brakes, each athlete uses its hands to stop once it clears the finish line.

Things to consider when watching skeleton:

When the sled goes higher on the turns, speed increases though it increases the chances of crashing into the walls when it comes off the turn.